Measures proposed to lift the rate of employment in the aquaculture industry in the Canadian province of Newfoundland and Labrador (NL) by requiring employers to set hiring quotas are counterproductive and unfair, according to the Newfoundland Aquaculture Industry Association (NAIA).

Mark Lane, NAIA executive director, says the call by workers union FFAW-Unifor for the government to mandate aquaculture companies to employ a minimum number of workers and set a minimum number of weeks of employment is unreasonable. “If implemented, [it] will likely result in less investment and production in the industry that would keep people employed,” Lane tells Aquaculture North America (ANA).

The union, which represents workers in the fisheries, fish farming and processing industries, says the aquaculture industry “struggles to provide meaningful work” for its 150 processing workers in the community of Connaigre Peninsula in NL.  In a CBC News report the union proposes that aquaculture companies in the province be required to process their fish at local plants instead of New Brunswick, where it says much of the processing work is now being done.

Lane says the closure of two facilities owned by Barry Group in Harbour Breton on the Connaigre Peninsula was due to the downturn in the wild fishery.  “The recent downturn in processing in the province is no different than any other industry such as oil and gas, agriculture or traditional wild fisheries,” Lane tells ANA. He noted that the aquaculture industry has re-opened both facilities.

But he acknowledged that lack of technology and equipment required for certain types of processing in NL facilities means these need to be done outside the province. “To my knowledge none of these plants can perform value-added processing such as portions or smoking. The plant in St Alban’s cannot do filleting.

“As well, for salmon in particular, current levels of technology do not allow for removal of pin bone pre-rigor in NL. Thus, to avoid unnecessary delays in transport and reduction in shelf life en route to market we process pre-rigor in NL, transport closer to the market and remove pin bones in New Brunswick. Having said that, every fish grown in NL is processed in NL,” he says.

He adds that the aquaculture industry has been “quite successful in keeping people employed in rural coastal NL year-round.”  About 450 people are directly employed on farms in NL, he says, including aquaculture technicians, veterinarians, managers, and divers. There are also more than 200 people employed in processing.

“For every job created on the farm there are three indirect employment opportunities created as a result, among them in retail, service, supply and transport. We are very proud of these accomplishments and the socio-economic contribution that we are making to rural communities.”

Like FFAW-Unifor, Lane is banking on the arrival of Marine Harvest in the province to expand NL’s aquaculture industry. In July, the Norwegian salmon producer finalized its acquisition of Canadian salmon farmer Northern Harvest Sea Farm (NHSF), which has 45 farming licenses in Newfoundland and New Brunswick.

Marine Harvest Canada (MHC) tells ANA that it is still developing its long-term plans to increase production on Canada’s south coast. “All salmon grown at NHSF operations in NL are prcessed to HOG and fillet stage on a contractual basis by the Barry Group,” says Jeremy Dunn, MHC Director, community relations and public affairs.

FFAW-Unifor says “the arrival of Marine Harvest in NL presents an opportunity to do things differently.  Not just economic viability, but an opportunity for responsible farming, meaningful jobs and respectful collective bargaining and labour relations.”

Lane says the entry of Marine Harvest, Grieg and expansion plans of Cooke Aquaculture will help the industry expand. “We are confident that employment opportunities will increase also accordingly.”

He says the industry is poised to meet the province’s growth target of 50,000 MT of finfish and 10,000 MT of shellfish by 2022. “This will eventually result in more long-term stable employment opportunities in additional communities around the province’s coast line and inland,” he says.

Lane concludes that “the best way to ensure long-term stable employment in aquaculture is to support the development of the industry across the province in both farming and support service sector.”

“This will create critical mass in production to keep people employed, but also open up new avenues of employment in servicing and supporting the industry,” he says. 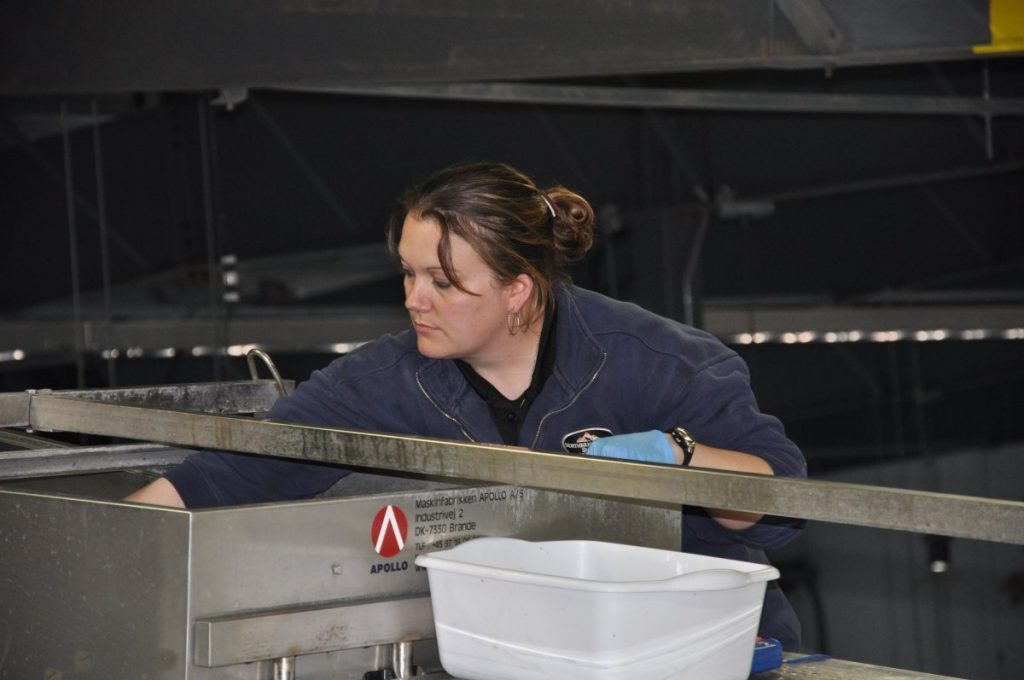 A Northern Harvest staff grading salmon harvest. Requiring employers in the province to set hiring quotas is counterproductive and unfair
Print this page