In pursuit of sustainability

When Cermaq CEO Geir Molvik recently warned against “greenwashing” novel aquafeed ingredients, he created a stir. But the blowback may have missed one of Molvik’s key points: these discussions need more nuance.

To pursue the complexity related to new feed ingredients, Aquaculture North America (ANA) spoke with Wenche Grønbrekk, the head of sustainability and risk for the Cermaq Group, a subsidiary of Mitsubishi Corporation. She also serves as senior advisor to the United Nations Global Compact, which guides the global business community in advancing UN goals.

How people define “sustainability” is one of the first challenges. “It’s changed meaning through the years,” says Grønbrekk, who has been working in corporate sustainability for almost 15 years. “It has different meanings on different continents. But what we’re seeing now is alignment – which I particularly like – around the SDGs.”

Those SDGs are the United Nations’ Sustainability Development Goals adopted in 2015, with an eye toward 2030. Several carry relevance for the aquaculture industry and feed production.

For example, “End hunger” encompasses aquaculture’s ability to help feed a growing population by 2030; “Life below the water,” the conservation of the oceans and marine resources like forage fish; “Life on land,” the deforestation risks of soy production; and “Responsible consumption and production,” the advantages and risks of producing novel feed ingredients, among other considerations.

Sustainability matters in a wide range of aquaculture activities. To emphasize the point and underscore Cermaq’s position related to novel aquafeed, Grønbrekk says: “We need to produce more seafood sustainably in the future to answer to the needs of a growing world population. And as a consequence, we need more feed. Just to be clear, we very much welcome innovation in this space.”

The premise that aquaculture needs new feed ingredients to grow was quantified in a recent study in Nature – Food conducted by researchers from UC Santa Barbara, the University of Tasmania and the International Atomic Agency. Using UN aquaculture growth projections, they forecast the forage fish required to produce the fishmeal and fish oil needed in 2030 to be over 24 million tonnes.

That is important since supply of these marine ingredients has been flat for 40 years, averaging about 29 million tonnes, with just over 20 million used for animal feeds.

But, applying the highest thresholds of plausible replacement by novel ingredients, their simulations predicted that aquaculture’s global forage fish demand could drop dramatically to 8.5 million tonnes.

Work in progress
Already, the inclusion of fishmeal and fish oil in salmon feed has declined, according to the UN Food and Agriculture Organization. In addition, the industry has turned to the use of fish trimmings and byproducts to supplement forage fish.

Cermaq notes that it has reduced marine ingredients to less than 30 percent of its salmon feed.

Plant-based ingredients, particularly soy, have taken up the slack. But this replacement strategy diverts important protein sources away from direct human consumption (remember, one of the SDGs is “End hunger”) and may create new environmental challenges.

Cermaq, like other leaders, has moved to manage the impact of soy production on deforestation. The result has been a whole new set of sustainable sourcing guidelines and goals to stop conversion of natural forests, steward conserved ones, and intensify agricultural yields sustainably.

So, the challenges with feed cut in many directions. As Dutch researcher Björn Kok points out, feed likely accounts for more than 90 percent of the cumulative environmental impact of aquaculture supply chains. Feed also makes up the largest share of total production costs, hovering around 50 percent. (If novel aquafeed manufacturers propose their products at a premium due to sustainability claims, then the complexity compounds.)

Algae are now a component of some of the feeds Cermaq uses, but such new ingredients are a small part of the total, Grønbrekk notes. Many different sources – single cell proteins, insects, microalgae, canola oil – are being tested and evaluated by the industry “We engage with these initiatives and we always monitor new knowledge related to new ingredients,” she says.

For example, Cermaq helps set the research agenda related to fish feed in the Norwegian Research Council and Norwegian Seafood Research Fund, which is financed by the industry through a levy on exports. “This is one way we are working to bring new ingredients to market, test them, and develop knowledge. As we obtain knowledge on innovations, we can ensure they get the right attention and priority,” she says. 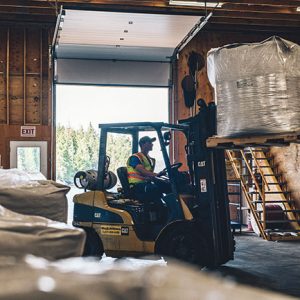 Promising new ingredients
One of the initiatives Cermaq sees on the forefront of advancing novel protein-based resources for salmon farming is the innovation center Foods of Norway, hosted by the Norwegian University of Life Sciences. Through new technology, the center is developing microbial ingredients such as yeast from blue and green biomass. Sometimes referred to as single cell proteins, this new aquafeed category is gaining high marks from academics in “cradle to factory gate” assessments of their environmental impacts (see story on opposite page).

Lallemand Animal Nutrition, an official partner of Foods of Norway, describes the circularity of the process as converting “low-value non-food biomass from forestry and agricultural industry into high-value feed.”

As “interesting and promising” as such innovation is, scaling requires significant capital, time, and scrutiny. “Everything new is not necessarily better than what we have built up sustainably for a long time,” Grønbrekk adds.

The scientists back her up. The novel aquafeed industry is in its early stages, and “further investigations on novel aquafeeds across all dimensions of sustainability are needed,” write the authors of the research “Global adoption of novel aquaculture feeds could substantially reduce forage fish demand by 2030” in Nature-Food.

Even that title is a mouthful, but sustainability is not a matter of a single word. And that seems to be the point Molvik was making.