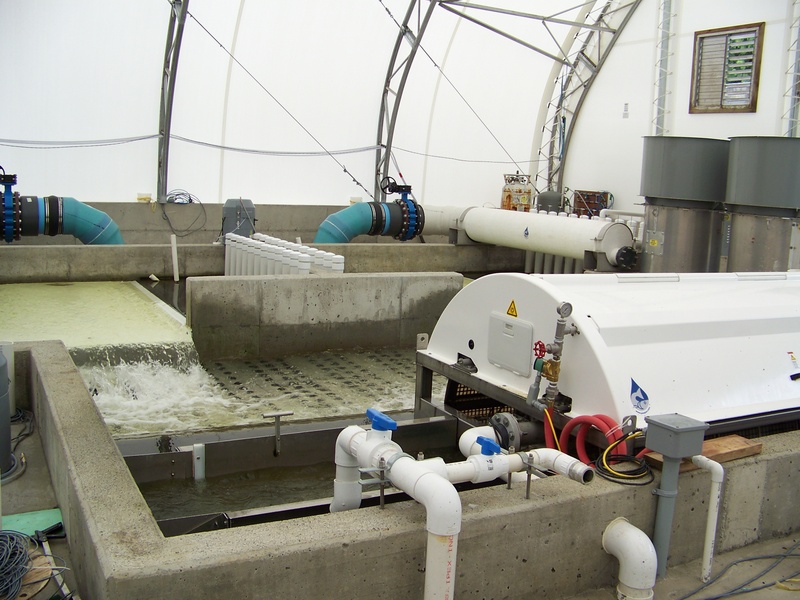 Up to 99 percent of the water at Taste of BC Aquafarms is re-used within the culture system.

Utilizing state of the art recirculating aquaculture technology, Taste of BC Aquafarms has developed from a prototype farm to test the feasibility of culturing steelhead salmon on land to a continuous production facility with weekly harvests close to the marketplace.

Steve Atkinson, president of Taste of BC, says, “I’m at the point of my life where I want to leave a legacy not just run a business. I want to help establish an industry for steelhead salmon in British Columbia in an environmentally responsible manner.”

Steelhead salmon are a variation of rainbow trout that in the wild spend part of the time in the ocean.  Like other Pacific salmon they have rosy flesh and rich flavour.  In the recirculating (RAS) facility, located on Vancouver Island, BC, Canada, steelhead are cultured in a continuous production cycle with the fish ranging in size from 20 grams up to 2 kilograms. Up to 99 percent of the water is re-used within the culture system which is possible through the use of a multi-stage treatment cell. Within the treatment cell, particulates are removed along with the majority of the carbon dioxide. Toxic ammonia is converted into nitrate using two aerobic fluidized sand biofilters and the water is supersaturated with oxygen prior to heading back to the fish. Atkinson notes that, “the unique design of this treatment cell has decreased power consumption compared to prior designs which has resulted in significant cost savings and decreased our carbon footprint.”

Approximately 40 gallons per minute of water leaves the RAS facility but nearly all of it is contained onsite, mitigating potential outside environmental impact. About half of the water leaves with the solids and goes into a waste settling cone where the solids are further de-watered and aerated creating a potential soil amendment product. Research is ongoing to develop this product into an additional revenue stream. The remaining water is used in an onsite greenhouse which is being developed into a commercial cold water aquaponics facility. Overflow from the greenhouse runs through a natural wetland after which it re-enters the water source for the RAS facility.

In addition to continually researching to identify and overcome the challenges of RAS for salmonid grow out, Taste of BC is committed to expand the industry through training.  All of the employees are graduates or students from the local Vancouver Island University and every year the company hosts practicum students from the university’s Fisheries and Aquaculture program.

“I’ve been fortunate to have the opportunity to work so close to home and the university. The hands-on skills outside of the classroom are beneficial to develop a better understanding of the husbandry practices within the aquaculture industry,” said Jordy Groff, a second year practicum student and part-time employee at Taste of BC.

Atkinson is proud of what has been accomplished. “Taste of BC is the first RAS facility to successfully reach continuous production with steelhead reaching the marketplace weekly since August 2014.”  He noted that due to supply issues in 2014, some of the fish were smaller than anticipated. However, they are working closely with their production chain to ensure through 2016 they will achieve continuous production of 1.5 kilograms and greater.

The market has responded positively to the product.  According to Atkinson “the steelhead have been very well received due to their exceptional flesh quality, color and fat content.”  He credits this to “the RAS technology, the excellent feed available and the use of ozone to ensure proper depuration of the fish.”

Depuration has been a struggle for many attempting to grow fish in RAS which has impacted market acceptance of RAS-raised fish. Atkinson believes he has solved this problem at Taste of BC. Various bacterial species, such as cyanobacteria, produce the strong odorous chemicals Geosmin and 2-Methylisoborneol (MIB). When water is recirculated, these chemicals can build up to detectible levels giving the fish an earthy taste also referred to as off-flavor. For that reason, fish leaving the facility go through a depuration process. At Taste of BC, a high dose of ozone is added to the incoming water which has effectively eliminated any off-flavor in the fish leaving the facility.

Recently a western Canada grocery chain Overwaitea Food Group has made a commitment work closely with Taste of BC beginning in the fall of 2015. While the fish are currently available at many locations across Vancouver Island, the partnership with Overwaitea Food Group will ensure wider market access. Fish produced by Taste of BC are marketed under the brand name Little Cedar Falls and according to Atkinson the company is working hard to ensure “the brand will come to mean exceptional taste, quality and freshness”.

One of the major challenges Taste of BC has faced thus far has been financing. “Conventional funding is almost impossible to get at this stage in the industry. Financing is expensive and difficult to obtain,” says Atkinson. For this reason, he entered the International Fish 2.0 seafood business competition and out of 170 participants was recently named a finalist. This means Taste of BC will get to compete with 16 other finalists for $180, 000 in cash prizes which will be awarded during the finals at Stanford University, California, on November 10-11 of this year.

In addition to winning the prize money, Atkinson hopes being in the competition will lead to a potential investor which will not only reduce the cost of financing but will open up a strategic partnership so that together they can help grow the RAS industry in British Columbia and beyond.