Issue around salmon tenures in BC remains muddy

The climate of uncertainly around the tenures of provincial salmon farming operations in British Columbia could dampen investor interest, according to the BC Salmon Farmers Association (BCSFA).

Salmon tenures in the province became a hot-button issue in October after BC Minister of Agriculture Lana Popham’s letter to Marine Harvest Canada (MHC) was made public. Some perceived the letter as threatening.

As reported in the Nov/Dec issue of Aquaculture North America (ANA), the letter warns MHC for stocking a farm in the Broughton Archipelago area between Vancouver Island and the BC mainland amidst the company’s dispute with the Namgis First Nation, which claims the area as traditional territory. MHC said it went ahead with stocking the smolts “for the safety of the fish.” The police were on site to ensure the protestors occupying the farm did not interrupt the transfer.

Salmon farms have a tenure agreement with the Ministry of Forest Lands Natural Resource Operations and Rural Development that gives them the right to operate on BC Crown land and water. However, some local First Nations want the right to control what activities go on in their traditional territories.

“Our members are still caught in the middle of a dispute between governments and those governments need to discuss what the best route forward is,” says BCSFA executive director Jeremy Dunn. “We are hopeful that the route does not significantly impair or collapse an industry that is worth over $1.5 billion to the province and results in 6,600 jobs.”

Shape up or ship out?

Popham’s letter to MHC went on: “Whatever operational decisions you should chose to make, the province maintains all of its rights under the current tenure agreements including potentially the requirement that you return possession of tenured sites a the end of the current terms. My colleagues from the Ministry of Forests Lands Natural Resource Operations and Rural Development will be in touch with you to describe the process for you to initiate applications for replacement tenures.”

Most salmon farming tenures in BC are for 20 years, but after a lengthy consultation process culminating in 2013, the government reduced that term to five years for farms in the Broughton area. Licenses with Fisheries Oceans Canada (DFO) are typically nine years. MHC has nine sites that are up for renewal this year. Other companies operating in the area, Grieg and Cermaq, are also subject to five-year terms in the area.

Popham letter appeared to warn salmon farmers and indeed, all who hold tenures with the government, about the importance of collaboration with the First Nations.

“Our government has committed to implementing the United Nations Declaration on the Right of Indigenous People (UNDRIP),” Popham wrote in the October 13 letter. “Practically that means that companies should make every effort to develop and maintain healthy relationships with First Nations in whose territories they are doing business.”

The letter could be taken to imply that the BC salmon farming industry is not following due process in their agreements, when in fact that is simply not the case. The BC Aquaculture Land Use Policy lays out how that consultation will take place. “Currently there is a required First Nations involvement in the tenure process,” explains Dunn. “There are a number of consultation requirements that the Crown undertakes and requirements for the companies to participate in those consultations, which our members are more than happy to do.”

If the rules are changing, BC salmon farmers haven’t been told yet.

“We are trying to find out what our future pathway looks like,” says Dunn.

“This new relationship and changes in the way things are done has not presented itself in a policy directive change as to how the consultative process around a tender would take place,” says Dunn. “The premier is on record as saying that how BC engages with First Nations will change. But what does that look like?”

Dunn says salmon farmers have 20 working agreements with First Nations in whose territories they operate, something that is not required by legislation.   “I think our members go beyond what the rules are around consultation,” he says. “In many cases our members have developed First Nation partnerships that include benefit agreements for a majority of their farm sites.”

“The farm sites in the Broughton are the only areas where we have a dispute and don’t have a good working relationship,” says Dunn. “There have been a great number of attempts at consultation and the First Nations there have been less than willing to engage in constructive dialogue.”

Businesses of BCSFA members, both on the farming and the supply side, are planning some $300 million in new investment over the next four years, Dunn says. “It wouldn’t be a surprise to me if some of those decisions are being delayed.”

“We have many First Nations businesses contracted to the sector wondering what the future looks like,” Dunn says. “Right now, unfortunately, we can’t give them a very solid answer. That is something we are hoping to change soon.” 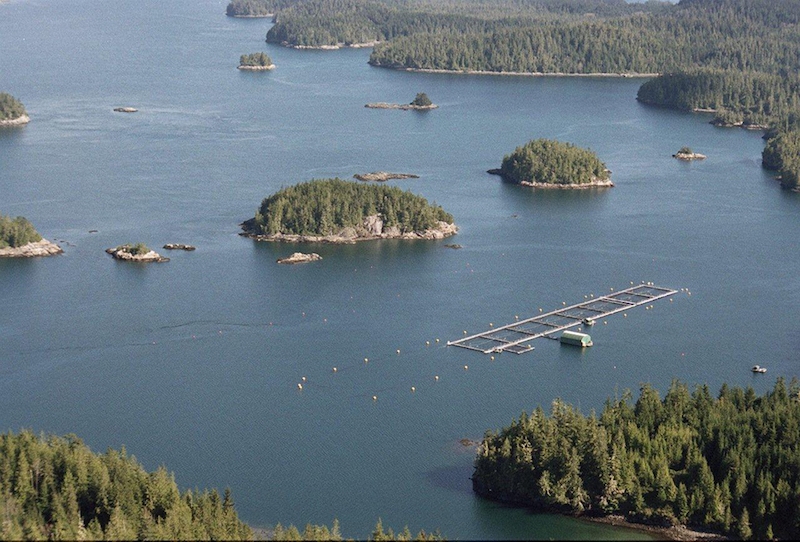 Aerial shot of a salmon farm in British Columbia. The uncertainty around the issue of salmon tenures in BC could impact $300 million in planned investment
Print this page