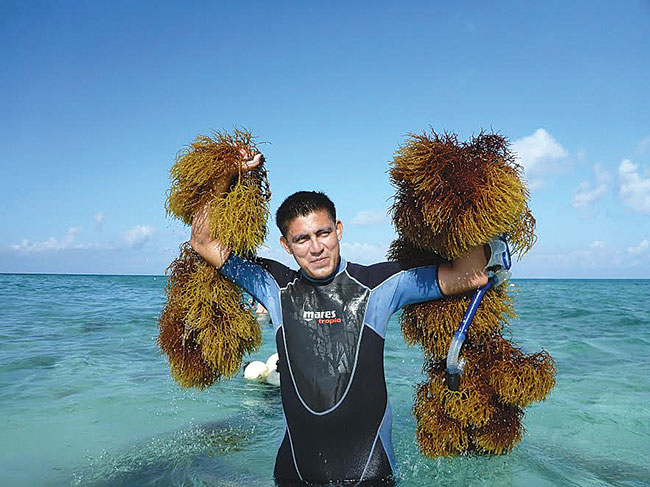 Findings of a new study have strengthened the case for farming seaweed as a supplementary crop to help fish farmers mitigate emissions from their farms while providing them with another source of income Photo: Robert Jones

Findings of a new scientific study have strengthened the case for farming seaweed as a supplementary crop for fish farmers to help them mitigate emissions from their farms while providing another source of income.

A joint study between the University of Adelaide and The Nature Conservancy (TNC) titled “Climate-Friendly Seafood: The Potential for Emissions Reduction and Carbon Capture in Marine Aquaculture,” assessed how GHG emissions associated with fed-finfish, macroalgae and bivalve mariculture could be mitigated. It reveals that when done right, aquaculture could be influential in actively reducing the drivers of climate change.

The study said that the addition of extractive species, such as seaweed, to existing finfish or bivalve operations –  a farming system called integrated multi-trophic aquaculture (IMTA) –  can also help to mitigate environmental degradation and the release of GHGs, helping to make individual mariculture operations emission-neutral.

The study acknowledged, however, that the biggest opportunity to lower a farm’s GHG emissions lies in making changes in the feed and methods of post-harvest transport because these are the biggest sources of emissions from farming operations.

Meanwhile, the researchers said there’s “a key gap in existing knowledge” about the interactions between mariculture operations and the surrounding marine environments. They said that life-cycle assessments that measure mariculture’s impact do not measure, for instance,  the loss of seagrass caused by the mariculture operation.