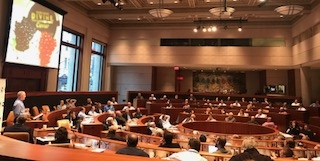 Day 1 of the 2017 Aquaculture Innovation Conference in Vancouver

Garry Ullstrom, CEO, told Aquaculture North America (ANA) that the company is now in “exclusive” talks with a potential investor to further develop the farm.

“After many years of sharing our challenges with you, I am delighted to report that we have reached our steady state of operations. Kuterra’s technology is now working as it should and we are delivering excellent quality of fish,” Ullstrom told the audience at the 2017 Aquaculture Innovation Workshop in Vancouver, BC on Wednesday.

Additional funding is being sought for an installation of a saltwater in-tank, an onsite hatchery and a cooling system.

In terms of production, they are trying to expand “to produce 300 tons and expand to 1,500 tons in order to get the economies of scale and improve profitability.” First-year anniversary harvest in 2015 yielded 180,000 kg.

The installation of in-tank aeration system, modification of a new growout tank and two additional harvest tanks turned things around for Kuterra by November 2016 and transformed operations. These improvements provided “excellent” water quality, which significantly reduced mortality rate caused by fungal infection. Early maturation was also reduced as were staffing requirements, which went down by 40 percent. The two new harvest tanks facilitated weekly harvests and increased the efficiency for purging flavor-changing compounds in the fish.

“The percentage of premium quality we produce has significantly improved,” Ullstrom said. The percentage of visibly maturing fish harvested is about 2.5 percent. In terms of fish size, they are now harvesting 4.5-kg fish. Over the last two months, fish that are less than 4 lbs have averaged 1percent. “That increased the percentage of the premium product that we sell,” he said.

Kuterra was conceptualized at a time when there were major concerns about RAS. None of these, he said, were experienced at Kuterra.

“We learned that there is strong demand for sustainably produced salmon…This system uses very little water; it produces a high volume of product per cubic meter of water. Fish welfare is very good and with Kuterra facility, there is no marine impact.”