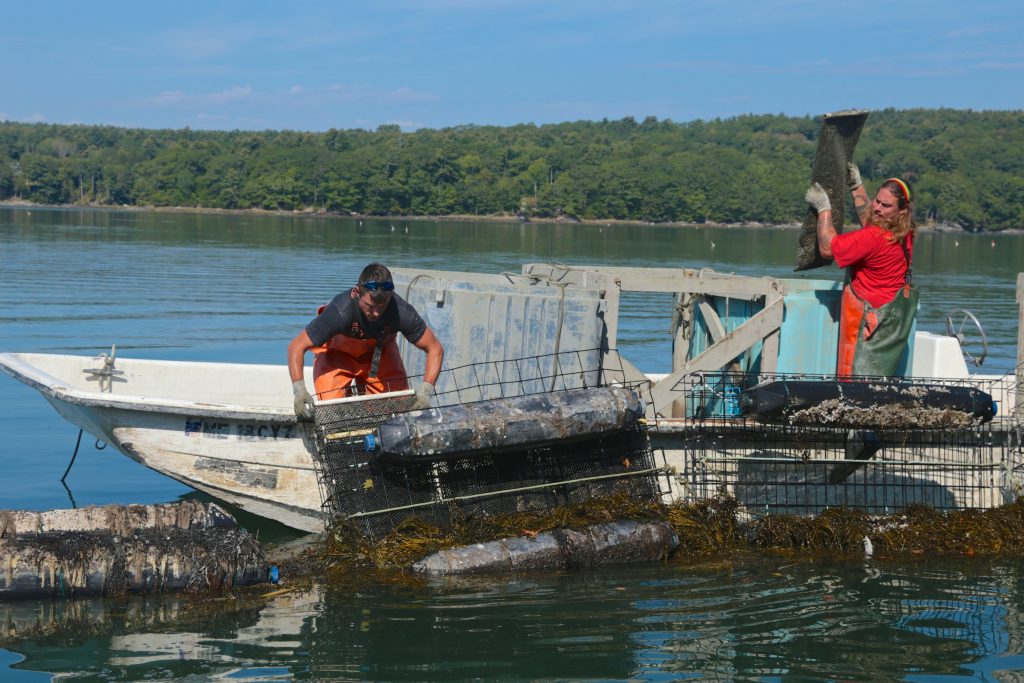 Bill Mook had been interested in marine science his entire life, a passion that led him to oceanography courses and eventually teaching marine and earth science in the Virgin Islands and Connecticut. He was in the process of pursuing a graduate degree in oceanography when, in his words, he got sidetracked by aquaculture. What started as a labour job to put food on the table while studying soon led to the creation of Mook Sea Farms in 1985 on the Damariscotta River in Midcoast Maine. The multi-faceted operation produces up to 100 million juvenile oysters and cultivates oysters for the half-shell market.

“I started out with literally a half an acre of land that I leased on the Upper Damariscotta River and built my first hatchery there,” says Mook. “A couple of years later, it was 1988 or so, I purchased the land we’re on now, which is maybe one lot removed from where that first hatchery was, and I built the business that we have here now.”

In the early days of the business, they produced and sold seed of almost every commercially available bivalve other than mussels, but in the early 2000s Mook decided to stop producing everything except American oysters and he became an oyster seed supplier as well.

Mook sees a lot of room for growth for the oyster half-shell market in the United States and that optimism has been the driver behind the company’s continued expansion.

“This has led us to increase our seed sales because we feel there’s still going to be a number of years where demand for good quality half-shell oysters will exceed supply,” says Mook. “We also have increased quite dramatically our market oyster production. We sell winter seed from North Carolina to Maine. Our market oysters are basically all wholesale, to three or four different wholesale companies, and those oysters go all over the country.”

Mook Sea Farm uses OysterGro cages, which utilize floats that suspend six bags of oysters below the water’s surface. The cages are manipulated seasonally as necessary, flipped up during the growing season so the oyster can be air-dried and then sunk during the winter to prevent ice damage.

One of the most important and unique facets of Mook Sea Farm’s work is their commitment to research and development.

“A lot of people will say that in operating a hatchery, there’s a lot of art involved, kind of the green thumb thing,” says Mook. “I’ve always felt that wasn’t true. This is a biological science. Part of our business model is to really attack biological problems head on. That’s not necessarily cheap, but what it does is it increases your dependability as you go. That’s something that’s led us to really making a commitment to R&D.”

“If you think of the hatchery as the engine that drives our business, which it is, the microalgae are the fuel that runs our engines,” says Mook.

Another R &D effort is to find ways to reduce or even eliminate harmful vibrio bacteria. The company recently built a facility that’s now home to these efforts. It will have four in-ground tanks with roughly 26,000-gallon capacities which they will keep at an optimum temperature – warm enough that the oysters are still metabolically active, but cold enough so that the vibrio reproduction rates are dramatically decreased. Researchers will look at the possible relationship between oyster feeding and vibrio, as some preliminary work indicates that feeding them could make purging vibrio more effective.

Further research efforts will be directed at developing a post-harvest process to further ensure the safety of the product, which could potentially be licensed out to other operators. The company is also working on research related to climate change issues.

The new facility is a 9,000-square-foot multi-purpose building, which will include an Oyster Inventory Room that will enable them remain open even during rainfall. They will isolate oysters from the Damariscotta River and hold them in highly filtered water which will still be irradiated before going in the tank. Microalgae production will also be moved to the new facility.

Mook is excited about the industry’s future and he hopes that his company and their research will play a part in it.

“The market growth that I’ve observed over the last decade or so, it’s really being driven by a younger demographic ‑ people in their 20s, 30s and 40s. There seems to be a parallel between market growth and the growth of the whole food movement. People want to know where their food is grown, that it’s natively grown. Our oyster’s story is consistent with that,” he says.