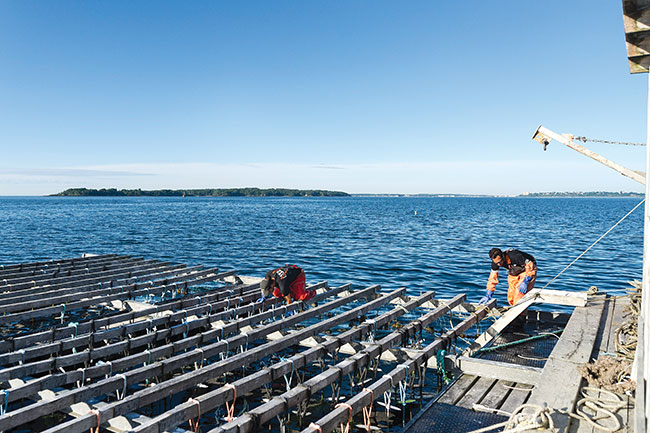 “Mussel farming is the most sustainable and low-impact way of producing food I have ever heard of,” Matt Moretti told Aquaculture North America back in 2017. As part of the father-and-son duo running Bangs Island Mussels in Casco Bay, Portland, Moretti was back then just starting to scale up Integrated Multi-Tropic Aquaculture (IMTA), a farming concept where complementary marine species are raised in one location to each other’s benefit.

Moretti has since discovered that a “simpler version” of the farming concept works better for the company. “Our particular form of IMTA is the extractive shellfish and algae,” he says.

He says the idea of adding finfish to the mix was explored earlier, but it would require technical and operational changes and new permits. Besides, they are already seeing positive benefits with using just the two trophic levels.

“Casco Bay is very prolific and a great place for mussels. There is a reason we’re here,” Moretti says. “IMTA is what we want to do and for us that means mussels and kelp. Both sides have scaled up, and they embody what we are trying to accomplish as a company. Both species have similar, positive, environmental benefits, and they complement each other well.”

Recent collaborations with teams at the University of New England, Atlantic Sea Farms, Bigelow Laboratory for Ocean Sciences, and the Island Institute have allowed them to expand the kelp side of the operation into a sustainable part of the business model.

According to some studies, kelp can create a “halo effect” around shellfish when raised in a polyculture setup by raising pH (reducing acidity) and increasing oxygen. This is beneficial to both bivalves and the marine environment.

Dr Nichole Price of Bigelow Laboratory, who started the pilot study into these benefits in 2018, said: “The study at Bangs Island stemmed from funding by the Nature Conservancy and NOAA, and since then we have received additional interest from the World Wildlife Foundation and the Bezos Earth Fund to look at similar operations in Alaska and in Norway. We are trying to determine if the ‘halo’ effect is reproducible on other farms in order to bring the same wate-quality benefits.”

To focus more resources on the two species, the company abandoned scallop farming despite successfully growing scallops during a multi-year experiment.  Many other groups continue to explore scallop farming in other regions in Maine and have experienced various levels of success.

While the company continues to evolve, it remains a family-owned business just like when it started in 1999.

The pandemic presented Matt’s sister, Annie Simpson, a career opportunity at the company. With her into the fold, their father Gary now works just part time.

“It’s great. I have completely switched careers but had done some management work in my past, so there was a good synergy. There’s a great group of employees and I have learned so much about the impact of mussels and kelp,” said Annie.

The former health care worker has brought great benefits to the company, noted Matt. “Annie really brings skills that we have not had before. She has helped us become a more mature company. It’s wonderful to have the entire family involved.”