The tide is turning

A positive public opinion poll is just one of the recent signs aquaculture in Nova Scotia is gaining further recognition, community trust

Aquaculture authorities in Nova Scotia have allowed Kelly Cove Salmon Ltd to re-draw the boundary of its Rattling Beach salmon farm in order to optimize its use (Photo: Cooke Aquaculture)

Nova Scotians think the province’s aquaculture industry positively impacts the economy, employment, and sustainability of a local food source – this is the key takeaway of a recent opinion poll commissioned by the Aquaculture Association of Nova Scotia (AANS).

The poll, conducted by Narrative Research on behalf of AANS between November and December 2021, surveyed 400 Nova Scotians aged 18+ on aquaculture themes including the industry’s economic impact, related industry regulations and the career opportunities it presents to young people.

The poll revealed that respondents have heard of aquaculture – associating it with year-round farming industry – and are aware that the province produces farmed salmon, mussels, oysters and trout.

The poll also confirmed the respondents’ interest in the industry by how they proactively seek industry information and identify the farmed seafood sold in retail outlets within the province.

However, despite their awareness of how the industry provides viable career path for young people, the respondents admitted they are not familiar with the diversity of career options the industry offers.

Finally, the poll showed the respondents wanted assurance that appropriate legislations are in place to safely regulate the aquaculture industry in the province.

“This polling shows the need to make Nova Scotians aware of just how well this industry is governed and that it is full of opportunities for the whole province,” said Tom Smith, executive director of the AANS.

Alignment with industry vision
The optimism of Nova Scotians over the aquaculture industry as indicated in the report aligns with the vision of Steve Craig, the province’s newly appointed Minister of Fisheries and Aquaculture, who, upon oath-taking last year said he is determined to make aquaculture a part of the solution for rebuilding the province’s economy. 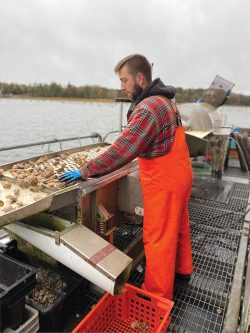 Craig said the new government in Nova Scotia supports low-impact/high-value, sustainable aquaculture and is cognizant that effective regulations, legislation, and science-based decision making are critical to the industry’s growth.

One proof of the government’s effort to implement effective regulation is the January 2022 announcement that Atlantic salmon producer Kelly Cove has been granted approval to redraw the boundary of its fish farm in Rattling Beach after thorough and rigorous approval process implemented by the Nova Scotia Aquaculture Review Board.

Craig’s appointment, the optimistic findings of the AANS survey and the rigorous process applied to the proposed farm boundary amendment of Kelly Cove’s facility may help further lift public perception of the industry, which appeared to have suffered setbacks in 2019 when Norwegian salmon farming giant Cermaq abandoned its plans to expand in six locations around the province. While the company says the lack of enough sites for its needs was the reason it scrapped its plan, there were also community concerns about its arrival in the province.