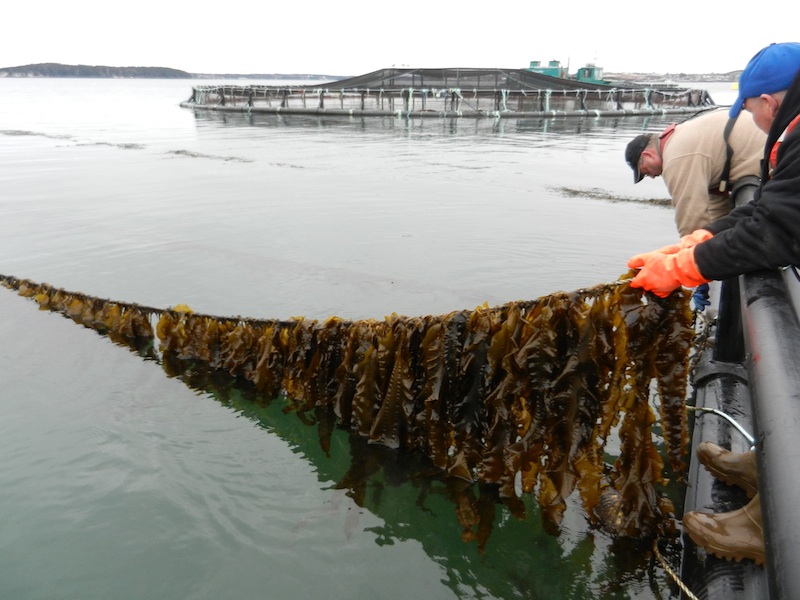 BLACKS HARBOUR, NB – Cultivated kelp raised on a farm in the Bay of Fundy has been certified to the Canadian Organic Aquaculture Standard and will soon be making its way into the marketplace.

The organic kelp is produced by Cooke Aquaculture at its Charlie Cove farm site near Back Bay, New Brunswick, and is being marketed under its True North Salmon brand.

The company is producing two species of kelp at the site – Alaria esculenta and Saccharina latissima – also called winged and sugar kelps, which the company says are known for their superior sweetness and flavour. These seaweeds can be eaten fresh or cooked.

“Seaweeds, like kelps, are popular around the world and in North America we are discovering how easy they are to prepare and how delicious and healthy they are,” said Andrew Lively, Marketing Director with True North Salmon, the processing and sales arm of Cooke Aquaculture. “Our sales team has been identifying a wide range of potential customers, such as chefs, restaurants and non-food sectors like the cosmetic and feed industries. We look forward to providing our first customers with organic kelp in the next few weeks.”

The Charlie Cove site is an Integrated Multi-Trophic Aquaculture (IMTA) farm. It produces kelp along with blue mussels and Atlantic salmon. This IMTA venture is a collaborative project between Cooke Aquaculture, the University of New Brunswick and Fisheries and Oceans Canada.

The UNB team, led by Dr. Thierry Chopin, assists in managing the kelp portion of the IMTA farm by collecting mature kelp in the summer and using it to cultivate stock for the next grow-out cycle.

By late fall, the kelp is transferred from the UNB team to the Cooke IMTA ocean site, where the farm crew cares for it as part of the farm’s operation. The kelp is ready for harvest in late spring/early summer and the finished products can be delivered to customers either wet or dry.