Cunner fish a potential weapon in the battle with sea lice 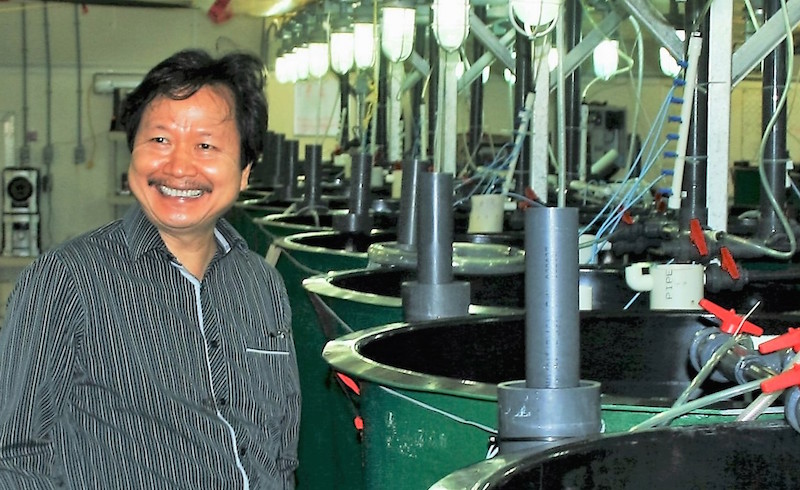 Dr. Ken Pee Ang with Cooke Aquaculture has been overseeing a cunner breeding program in New Brunswick. The program's success is good news for fish farmers.

The loading bay of the BioCentre at the Huntsman Marine Science Centre in Saint Andrews, New Brunswick, is abuzz with noise and activity. Technicians are moving fish – cunners – from tanks to buckets, from buckets to transport tanks on the back of a truck. Shouting to be heard over the echoing whirr of all the various pumping equipment, they call numbers and figures back and forth to each other – the number of fish left to load, what the temperature is in the transport tank, how that may change during transit, estimated travel time.

Standing in the midst of the chaos is Dr. Keng Pee Ang, Vice-President of Research and

Development, Feed and Nutrition for Cooke Aquaculture. He’s smiling – today’s move is necessitated by the fact that the breeding program is doing well.

Ang is overseeing a cunner breeding program that could prove to be a key part in controlling sea lice in the future.

Later, in Cooke Aquaculture’s office in Saint John, New Brunswick, Dr. Ang says the basis for the trials on the use of cunners as a tool to combat sea lice – which were themselves the basis for the breeding program – lies as far away as Norway.

“These fish are called cleaners simply for the fact that they clean other fish,” says Dr. Ang. “So the Norwegians have been using cleaner fish for a while.”

The Norwegians have been using native wrasse species because they were found to readily consume sea lice. Dr. Ang saw the potential for such efforts in North America. But since those wrasse species are not native to eastern Canada, he had to find a local alternative. Cunners seemed ideal, though a previous researcher had deemed them unfit. Dr. Ang was not willing to accept this.   “I wanted to do the experiment again myself,” says Dr. Ang.

The first trial was extremely simple – two cunners, 40 sea lice and some seawater in a plastic tote. Even five years later, there’s still excitement in Dr. Ang’s voice as he tells the story of how he and a technician monitored that first trial.

“We were like two kids, with our hands on our knees watching them,” says Dr. Ang. “In the first minute, I was saying ‘please eat, please eat, please eat.’ It was like cheering on a turtle race or something. In the second minute, one of the fish went to one of the lice on the wall and touched it with his nose. The lice moved. He touched it with his nose again and it moved again. After I don’t know how many tries, it opened its mouth and vacuumed this sea louse off the wall and into his mouth.”

Minutes later the second cunner got into the act and before long they had eaten all of the sea lice on the walls and floor of the tote.

These encouraging results inspired a litany of new trials, undertaken at Kelly Cove Salmon Ltd., Cooke’s farming division. The results of those trials showed that not only would cunners eat sea lice off of salmon, but that the two species were very compatible. Cunners crave shelter and they often found it swimming around underneath the larger salmon.

“In one of our very early trials with salmon, we put 11 salmon and 22 cunners in one tank,” says Dr. Ang. “I thought ‘if 22 cunners don’t work with 11 salmon then forget this species.’ In the first 24 hours, five of the 11 salmon were completely clean. The other six took another six days, but by the end of the week all 11 salmon were clean.”

Those trials inspired another round, this time with tank trials at the Huntsman Marine Science Centre and field trials at a farm in the Bay of Fundy, funded through the Canadian Department of Fisheries and Oceans Aquaculture Innovation and Market Access Program and the New Brunswick Department of Agriculture, Aquaculture and Fisheries. The tank trials were successful in demonstrating that cunners had no interest in commercially formulated feeds which are normally used to feed salmon and showed again the compatibility of cunners and salmon. Dr. Ang is quick to give credit to expert advice from consultants and universities and especially to his dedicated team of research assistants, who in some cases had to stay overnight at the facility to monitor the system in case of power outages during winter storms.

“I am very happy with the effort of this group,” says Dr. Ang. “They went above and beyond the call of duty and all this would not be possible without their contributions.”

The field trials were also somewhat successful in demonstrating that cunners were effective in removing adult sea lice, particularly at the gravid stage of development, but those trials were suspended when the level of sea lice on the rest of the farm was deemed to be dangerous to the salmon and conventional treatment methods had to be used. Dr. Ang attributes this to outside factors.  “There was a farm up from our farm that had sea lice but they were harvesting so were no longer treating,” says Dr. Ang. “Their boat traffic was going right past my experimental farm.”

Regardless, the results were encouraging enough that Cooke is moving forward on breeding cunners for use as a cleaner fish, both at the BioCentre at the Huntsman Marine Science Centre in St. Andrews New Brunswick and at the Ocean Science Center in St. John’s Newfoundland, to make sure that the wild population does not get over-exploited for this purpose. At the same time, Dr. Ang is also performing new trials with lumpfish – another cleaner species that may be even better suited than cunners due to their easier larval stages, faster growth rate and effectiveness at lower water temperatures.

“That’s part of why I’m so passionate,” says Dr. Ang. “It is working and it’s shown to be working. Not just theories or anecdotes. In Norway, it’s been shown that lumpfish and wrasse have been able to significantly reduce treatment needed in a commercial farm. Some farms used to be treating six times where now they only treat two or three times. Treatments are very expensive. Some farms have even become certified organic because they no longer need treatments. The potential is immense.”

For more on the cunner breeding program, see the November/December issue of Hatchery International.