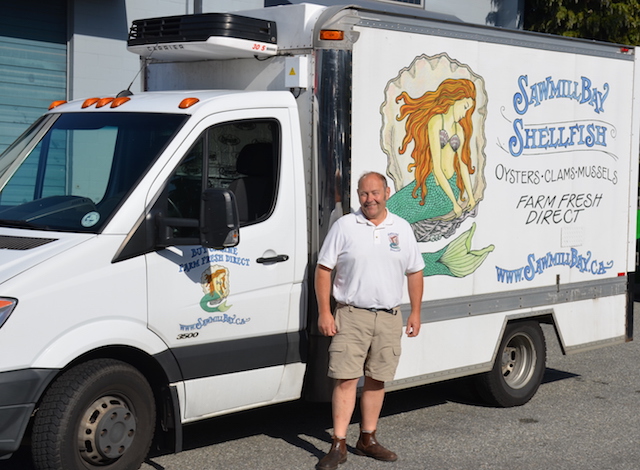 Building relationships with chefs has been key to marketing success for a Canadian shellfish grower.

“Going the extra mile to make sure the customer is satisfied is what it’s about,” Steve Pocock explains.  “Unless you feel you are the sort of person who can do that, then this is not for you.”

Selling to a wholesaler wasn’t working for British Columbia shellfish grower Steve Pocock.  “Some weeks they would want 500 dozen and the next week they wouldn’t want any,” he explained in an interview on board a ferry from Vancouver Island to the mainland to deliver his oysters.  “The price we were getting was really just over the cost of production and where we are situated means there are a lot of transportation costs.”

Pocock calls his direct-to-restaurant marketing a “coincidence”.   Five years ago, an ex-chef from Campbell River on Vancouver Island came to visit and took away a few oysters.  A couple of months later Pocock got an email.  “A guy from a restaurant wants to buy your oysters” the note read.  Pocock says he wondered, “Okay, how’s that going to work?  This is a bit different.”

The former chef was hired for a couple of weeks on a free-lance basis and he established a small group of restaurants.  They started off in Whistler, just north of the city of Vancouver, BC and then in Vancouver itself, just about the time of the 2010 Winter Olympics which were being held in that city.

Three things were working in their favor Pocock explains. “The direct to chef idea was in vogue. Several of the wholesalers were not doing a particularly good job of taking care of the restaurant market and it was a period of substantial demand.”

“We got into some good restaurants, but it is not something that happens over night.” Pocock recalls, adding he spent lots of time pounding the pavement.

That pavement is a long way from home. The Pocock family lives on Quadra Island and their beach and deep water grow sites are on adjacent Read Island.  Both are part of the Northern Gulf Islands group, nestled between Vancouver Island and the BC mainland.  Same day deliveries begin on the 6:15am ferry from Quadra Island to Vancouver Island.  A one and a half hour drive south to Nanaimo and Steve is on the 8:20am boat to Horseshoe Bay which is about half way between Whistler and the city of Vancouver.  Return trip sees him on the 7:00pm ferry back to Nanaimo and squeezing on the 10:45pm boat to Quadra.

In the early days Pocock says he barely made enough to cover the ferry expenses.  “We could see that in order to build any kind of reputation you’ve got to be reliable and consistent.” He remembers chefs saying after 2 or 3 months “Oh, you’re still here?”

“Last year we sold just over 100,000 dozen fresh oysters and this year we are probably on target for 150,000” says Pocock.  The company, Sawmill Bay Shellfish with a distinctive mermaid logo, also ships 60-70,000 pounds each of mussels and clams.  Direct-to-restaurant accounts for nearly 100% of sales, with customers in Whistler, Vancouver, Calgary and Montreal.

The world of the chef is not that big.  “One says to the other we are getting our oysters from Sawmill Bay,” says Pocock.   “So you get some referrals and a chef says we really like your product so you ask him who else you can talk to.”

“You’ve got to make yourself different from other people. We base it on quality and reliability,” he explains.  “It’s a long way from the old days when you just chucked your oysters into the back of the pick up and the dog was there as well.”

“One of the key things for us is our location,” says Pocock.  “We are in a pristine area.”  (Winter population of Read Island is around 50 people)  The second factor is freshness.   “We can have a delivery into a restaurant in less than 24 hours of coming out of the water,” he adds.  “Any chef who is worth his salt will realize freshness is key.”

The restaurant industry is not as fractious as you might think, Pocock explains.  “You do see a fair movement of chefs which isn’t a bad thing for us because it spreads the word,” he says.  “But at many of our top restaurants the chef is the same person who was there 5 years ago.”   Oysters are also a higher end product.  “The restaurants we are selling to are not the type who are going to be open this week and closed in 3 weeks.” he adds.

Still, there is the occasional account that is going through a rough patch and needs to be cut a bit of slack.   The beauty of multiple accounts is that if one restaurant is not paying, the others still are.  If you are dealing with only 1 or 2 wholesalers, you are more vulnerable. “When we were in France growing vegetables we were selling to a publicly listed company and they went bankrupt,” Pocock remembers.  “You are back to square one.”

“Our chef customers know me and if there is a problem they are going to call me and say hey Steve!  A lot of farmers would shake their head at what it takes to create that relationship and say no that’s not for us,” Pocock says.   “You’ve got to have empathy with the problems of the chef.”

Sawmill Bay also supplies oysters for the Whistler based Annual Bearfoot Bistro World Oyster Invitational.  “Last year we did 1200 dozen oysters between 1 and 5pm,” Pocock says.  It’s a charity event that donates to the Whistler Blackcomb Foundation, which provides financial support to area non-profit associations with an emphasis on child, youth and family programs.

“The biggest satisfaction for me as a grower is looking at people that you sell to in the eye and having them tell you that what you are doing is really good,” Pocock adds.  “And you think wow this is actually worth doing!”