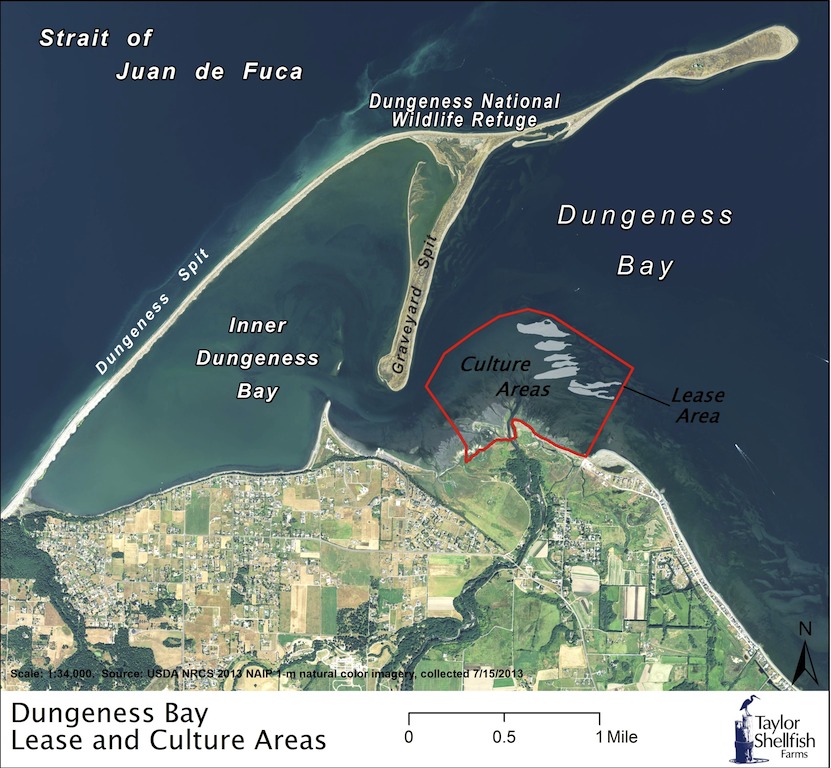 When it comes down to it, company spokesperson Bill Dewey admitted recently, Taylor Shellfish has had a fairly rugged time of it in the last seven years or so, working the Washington state coast up against ongoing NIMBY (Not In My Back yard) problems and also production concerns because of ocean acidification.

But Dewey and company president Bill Taylor both express plenty of faith in the company and the shellfish industry in the area, including Willapa Bay – despite the difficulties with changing ocean conditions and other challenges.

And Taylor’s says that in general, the company’s shellfish sales and production continue to climb in the state – a long way behind meeting ever-escalating demand – so the company is looking to expand and constantly reviews approaches offering shoreline leases.

Dewey confirmed that one of those recent approaches was by a duck-hunting club for a 300-acre lease of tideland it owns next to a bird sanctuary in Dungeness Bay near Squim.

Dewey said that when Taylor’s began expressing interest in using 30 acres of so of that site at a time for rearing geoducks, concerns immediately started to be raised by long-time opponents of the industry in the overall region, some of them professing to have concerns about possible impacts on the sanctuary, and on the area’s eelgrass beds.

Dewey stressed that the Shelton-based company, which has been farming in Willapa since the late 1990s, doesn’t expect to have any impact at all on the sanctuary, so it is moving towards taking on the entire area under lease.

That would be of benefit financially to the club, he said, and it would also allow Taylor’s – which he said believes it is starting to gain some ascendancy over the fluctuating ocean-acidification problems in the region, including Willapa – flexibility to move about the leasehold. It may perhaps need to do that to stay away from the shifting eelgrass beds, he said.

And Dewey told this publication that the last several years have shown Taylor’s that geoducks are way ahead of oysters and clams in providing farmers in Washington State with an operating profit. The geoduck clams go live by air, mainly to China and Japan, where they command considerably higher prices for the North American buyers and exporters.

Dewey confirmed though that Taylor’s expansion plans for Willapa – which it began using for oysters more than 30 years ago and still cultures about 90:10  oysters:clams – include using a specially developed Shigoku  brand of oyster.

He explained that the Shigoku is a Japanese oyster developed to have a deeper cup that provides more flesh and body, which makes them particularly popular with consumers and oyster bars.

Company owner-operator Bill Taylor is quoted as saying the company owns some 11,000 acres of tideland in the state, with around 6,300 acres of that in Willapa. It employs up to 40 people from the area and about 500 statewide.

And Taylor is recorded saying they anticipate that number continuing to climb in the coming years, with the expansion leading to more jobs setting up farms, seeding and harvesting, as well as at the Shelton processing facility.

Phil Stamp, Taylor’s Nahcotta oyster and clam Farm Manager, is cited saying the company currently has about 1,000 lines of Shigoku oysters in Willapa Bay and plans on putting in at least another 400 lines of deeper oysters. Each line has 39 bags containing the shellfish, which allows the filter-feeders to tumble in the waves, forming the deeper cups.

It’s expected to cost the company several hundred thousand dollars, but the production value is quoted as being expected to be double that of other oysters.