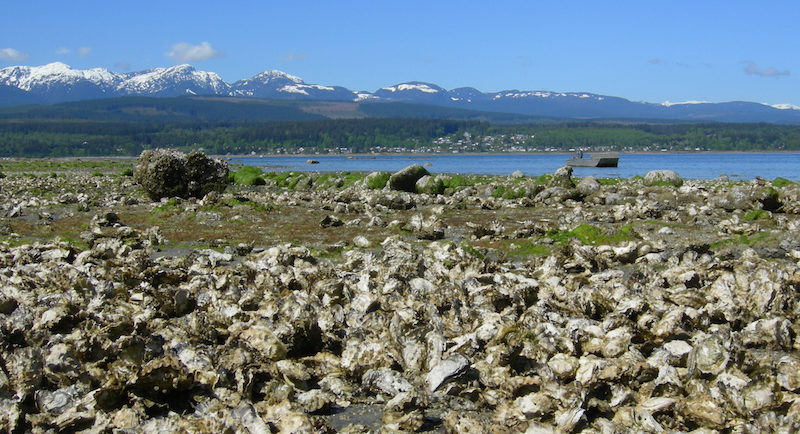 Knowledge is the key to being able to respond to the results of climate change, said Dr. Steve Cross, when he spoke to the BC Shellfish Grower’s Annual General Meeting in Comox, BC, Canada recently.  “Know your site.  Know your species and make the changes that are needed,” Cross told the growers at the meeting.

“There are a number of indicators that suggest that global warming is here,” Cross said. “Ice caps are melting, sea levels are rising and there is a rise in sea surface temperatures. We see changes to ocean chemistry and of course, there is a temperature increase in our atmosphere.”  “I would suggest that this climate change, is a real event,” quipped Cross.

Cross shared NASA images of how polar ice has shrunk over the last 30 years.  “We have about 5 million square miles of ice on earth,” said Cross. “If we see increasing temperatures melt our ice caps and our land based ice, we are in trouble in terms of sea levels rising.”

There are lots of models of what could happen to sea levels over the next 50 years. For our west coast, the predictions are anywhere from a 10 to 20 cm increase in sea levels, to up to a meter.  “If that happens and anybody is growing on the beach, I would suggest that they switch to deep water pretty quick,” chuckled Cross.

Global warming, while it may show regional differences, averages out to be an overall increase in temperatures across the planet, Cross said.

Temperature and salinity are affected on a regional basis and on a farm specific basis, Cross pointed out.  “On my own farm on the west coast of Vancouver Island, we have seen an increase of at least 2.5oC in surface temperatures across the entire year,” he said. “Nice for swimming, not so nice for farming shellfish.”

Changes in salinity are often related to extreme rainfall events that are occurring more frequently.  “You are going to get stratified layers with different levels of fresh water across inlets,” Cross said.  “And often at different times than we are used to.”

“Another direct impact of climate change is on the chemistry of water, the carbonate cycle and the ability of shellfish to construct shells due to pH drop,” Cross explained.  “That’s already a major issue.”

There will be indirect changes in ecosystem structure Cross said. Although you are growing 1 or 2 species of shellfish, climate change could affect the species composition and the community structure around your farm. Species may die off that don’t seem important for your own production but may be a key in the ecosystem.  We may see more exotic or invasive species as we see changes in the environment. There will be an effect on the development of harmful algal blooms and the timing of those blooms.  “What is the effect of a small shift in pH on viral communities?”  Cross asked.   “Will we see an increase in pathogens?”

What can growers do?

How farmers should adapt is a hard question but the first step is to know your site.  Lots of the work around climate change has been done on a global basis, Cross said.  “But if we are talking about individual businesses and the impact of changing conditions on your farm, you really have to understand what is happening regionally and on a farm level in terms of the water quality.” Consider this from a seasonal aspect but also in terms of changes in the vertical water column as well, he added.

Oysters can stand a broader range of temperature and salinity compared to scallops that have a narrower tolerance.  “If we start to see a dramatic shift in those parameters, scallops may be the first species to be impacted where oysters may be able to adapt to those changes over time,” Cross said. “But there may be a time down the road where we exceed those limits.”

“Changes to your production may be in order.” Cross said. Farmers have selective breeding programs and are able to grow animals that can adapt to changes over time.  Placement of seed can be timed and different sites across a farm can be selected.

Cross also explained the “Ship of Opportunity” program where NOAA and other agencies around the world use ocean transiting ships to collect data.

Cross outlined an “Opportunity Farm” project that NSERC is leading around Vancouver Island.  They have installed monitoring equipment at 4 aquaculture sites and hope to expand it to 6 or 7 to encircle the whole of Vancouver Island. “In a perfect world this would have been started in 1950, but a lot of people are getting on the bandwagon setting up a coastal surveillance program.”

The NSERC council has designed an instrument package that is going to be permanently established at these sites.  “The entire system will be web based,” Cross explained.  “We will be able to monitor all stations remotely, share the data and program individual stations to collect data as we want.”