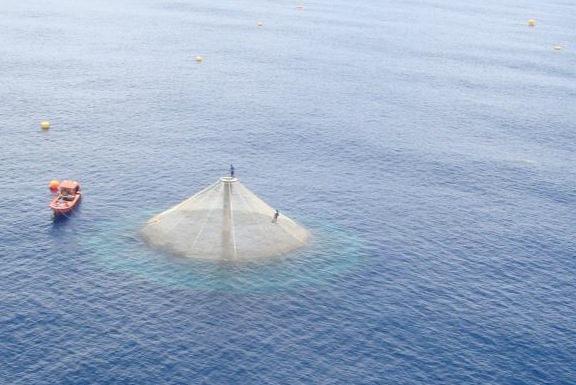 Rose Canyon Fisheries is moving through the permitting process to develop a site off the coast of San Diego, California.  HSWRI president and CEO Don Kent, who also serves as honorary CEO of Rose Canyon Fisheries, outlined the project to Aquaculture North America (ANA) from his office in San Diego.

“We want to reinvigorate the existing seafood industry with a new supply,” says Kent.  “All around the world we are doing aquaculture but here in Southern California, one of the most technologically advanced areas of the world, we are importing nearly all of our seafood.”

The first species that Rose Canyon is planning to raise is the native California yellowtail Seriola dorsalis, known as  “Hamachi” in the sushi trade.  The Hamachi used for sushi in California is already farmed, but it’s farmed in Japan explains Kent.  “I think it is incumbent on us to be responsible for our own sustainability and not just buy it off somebody else,” he says.  “It just doesn’t make sense to fly fish 6,000 miles when you can bring it in on a boat from 4 miles out.”

The proposed two grids of 24 pens each will cover a surface area of just under half a square kilometer.  The site selected is directly west of San Diego.  It is sheltered from major storm events and has low surf energy.   California’s Mediterranean climate is ideal for these temperate-water fish, Kent says. There is an under-used commercial fish processing and distribution infrastructure on the docks and a market of nearly 39 million people in the state.

“We worked with recreational and commercial fishermen and the guys that run the party boats,” says Kent.  “We were looking for a site that had no relief to it, no bottom substrate with a good current flow and a maximum depth of 300 feet.”  By chance, it’s almost a straight shot 4.5 miles out of Mission Bay and the HSWRI laboratory.

They are looking at “SeaStation” dual ring cages built by InnovaSea.  “We have a well defined thermocline off our coast, where at 30 to 35 feet of water depth the temperature drops dramatically,” Kent says.  “With a regular SeaStation pen that is 90 feet tall, two-thirds of your culture volume is below that thermocline, so by using the two-ring cages we can stay more in that warmer water sweet spot between the surface and the thermocline.”  InnovaSea engineers are designing a cage that will provide about 11,000 cubic meters of culture space.

The project is funded by Cuna del Mar. “Right now we (HSWRI) are the advisors and it is our intention to provide juvenile fish at least for the first couple of years,” Kent explains.  “We will start at 1,000 tons of production, which we can do at our existing facility.  Once we get up to 2, 3 and 4,000 tons we need to increase our breeding and larval culture capability but those are capital investments with a proven product.”

The company plans a nursery by the harbor to grow juveniles to about 30 grams.  “It takes us about 50 to 60 days to grow a yellowtail egg to a 1 gram fish,” says Kent.  “Once they hit 1 gram if we put them into a recirculating system at the right temperature we can get them to 30 grams in a month so we can do multiple crops in a year.”           Rose Canyon has a target of 18 months for a yellowtail of 4 kilos with feed conversion efficiencies averaging 1.5-1.6 to 1.

“We have developed experimental diets that we have tested out to well over 2 kilos that are 100 percent soy protein,” says Kent.  “We compared them to a group that was growing on a regular fish meal diet and the tasters couldn’t tell the difference.”

“But we have never tested that on a commercial scale,” he adds.  “That for me is what our Institute is most excited about.  The great opportunity is that we will have a commercial-scale operation that we can be trying more and more things on, for greater sustainability, using the Hubbs laboratory.

Applying for an offshore site

Rose Canyon Fisheries (RCF) is applying for permits for the first commercial offshore aquaculture project in the US, to be built in the exclusive economic zone (EEZ) of San Diego, California.

The agencies themselves — the EPA, Army Corps of Engineers, and the Coast Guard — are very responsive to the application, says Don Kent CEO of RCF.

Rose Canyon will seek an aquaculture registration permit from the California Department of Fish and Wildlife, and the California Coastal Commission will need to certify consistency with the Coastal Act.  NOAA is coordinating the process.

“What it comes down to, is getting familiar with the range of issues that people might have as the environmental concerns,” Kent explains. “Living and breathing this for decades as I have, we know what the concerns are and the solutions to mitigate them.”

RCF has been using an Acoustic Doppler Current Profiler to continuously measure the current speed and the temperature at various depths for over a year.  That information goes to a NOAA lab where they are modeling what water quality changes might occur.

“Because of the depth and the ambient current at our proposed site, we expect that dissolved nitrogen, phosphorus and carbon will be dissipated quickly,” says Kent.  “The model will inform us on farm performance and environmental response before we even begin building the farm.”

The city of San Diego has a major concern with the project that seems somewhat ironic.  San Diego is the only city in the US that still discharges primary treated sewage into the Pacific Ocean.  As part of an EPA agreement, they are required to monitor seawater quality regularly and they are worried that nutrient levels at Rose Canyon will interfere with their measurements.  If tests show that water quality is deteriorating, the city is in for a bill worth billions.  They would be forced to install a secondary treatment facility to clean up their discharge into the ocean.