Report bares advances and barriers to adoption of closed cages 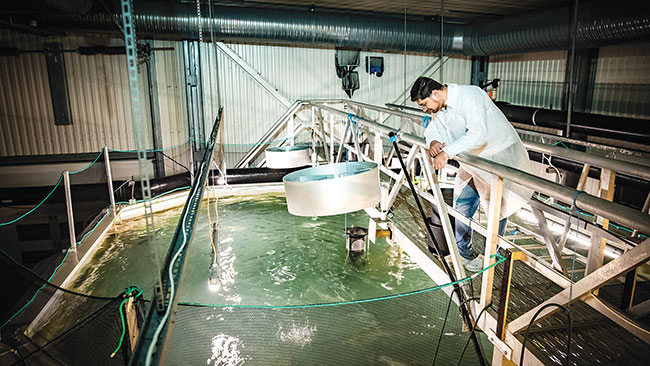 Scientist at CtrlAQUA studies water current behaviour in small and large tanks. In its 2020 report, the R&D center highlights the advantages of semi-closed containment systems and what discourages investments in them Photo: Terje Aamodt/Nofima

Innovations in closed containment aquaculture present farmers with fresh approaches to growing Atlantic salmon, but there are “bottlenecks” to overcome before these technologies become reliable, economically viable, commercially available and sustainable.

The report, which puts spotlight on both sea-based Semi-Closed Containment (SCCS) and land-based Recirculating Aquaculture System (RAS) underscores the positive outcomes achieved by early adopters of semi-closed systems as well as the factors that discourage investments in the technology.

Revisiting energy use in RAS
RAS, the more mature closed containment technology, has seen decades of success in Norway where almost all new projects for smolts and post smolts are RAS-based.

The CtrlAqua 2020 report says the energy issues associated with RAS need to be addressed for the technology to be viable and sustainable.

Krüger Kaldnes, the Norway-based RAS specialist featured in the report, maintains that energy is the second largest cost in RAS facility next to feed.

“The RAS sector has been focused in creating bigger facilities, bigger tanks and producing bigger fish, yet little has been done to reduce the energy used in RAS units,” says RAS expert and Krüger Kaldnes business development manager, Frederic Gaumet.

Gaumet says his company is trying to address sustainability issues in RAS by determining how much energy is used by water pumps and carbon dioxide degassing units which removes CO2 from water in RAS farms.

Krüger Kaldnes is working with Nofima in a project designed to help farmers reduce by 15-20 percent the energy used in RAS facilities by optimizing energy sources, managing their consumption, and recovering energy from water and air.

Gaumet believes that a “carbonate toolbox” the company is developing with Nofima will help RAS farms manage carbonate efficiency. “This digital toolbox, which can estimate CO2 development based on biomass, feed, PH and other factors, will help scientists determine the potential energy savings of carbonate modelling which can be validated in actual farm practices.”

Bottlenecks in SCCS adoption
Another company featured in the CtrlAQUA 2020 report is Cermaq, a Norway-based fish farming company which pioneered the building of 10,400 m3 semi closed containment system in Nordland, Norway in 2018. The company is trialing the system in Canada where it built a 15,000 m3 SCCS in 2020 (see update on the trials on page 24).

Harald Takle, head of Marine Innovation and Development at Cermaq, says SCCS has shown great potential at tacking delousing problems in farmed salmon. “We found out that we didn’t need to delouse in a semi closed system unlike in traditional net system where delousing is required several times,” Takle says.

According to some industry estimates, sea lice treatments cost the industry $1 per kilogram of farmed salmon.

Despite these promising results, Takle says closed containment systems technology has a long way to go before it can be compete side by side with RAS or open net pens. “We must continue to improve fish performance, reduce cost and show proof of successful operation of closed facilities at sea to encourage investments,” he says.

He adds that lack of comprehensive documentation on the effects of semi-closed facilities discourages growth and adoption of the system. “Data from a single closed containment system will not be sufficient and lack of documentation carries big risks to investors,” says Takle, noting that investments in SCCS investment are on hold in Norway at the moment.

Licensing is an issue and the industry should consider creating a separate licensing scheme for closed facilities, he said, adding that the industry must stimulate R&D of cost-effective closed systems technologies.

Today, scientists at CtrlAQUA are doing R&D on purification of intake water to enable farms to move fish freely among other containment facilities without applying for an exemption. Takle says this is very important for a cost-effective production of post-smolt exposed facilities and offshore production.