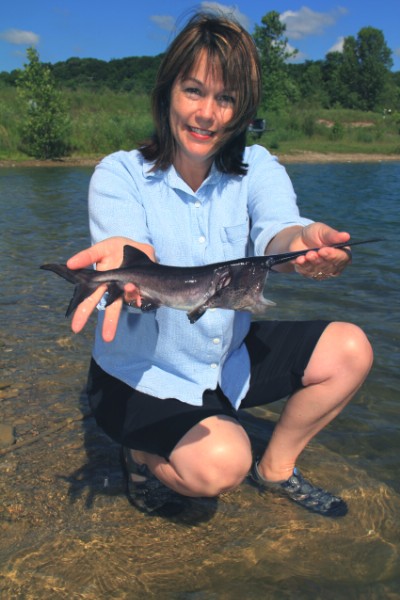 Renee Koerner’s early career was in the food and wine business and when she decided she wanted to return to the production end, she fully expected she would end up making an artisanal bourbon. Instead she started Big Fish Farms and she’s harvesting caviar.

Koerner was inspired to embark on this enterprise about 10 years ago, when she came across Professor Steve Mims of Kentucky State University, who was studying ways of helping paddlefish (a member of the sturgeon family that’s indigenous to the US) make a comeback from overfishing and poaching – primarily for their roe.

Koerner, said she’s “old enough to remember” when the National Oceanic and Atmospheric Administration (NOAA) started to do some DNA testing on osetra sturgeon caviar shipments – and discovered that in numbers of cases producers were using paddlefish eggs to “cut” or fill out shipments of osetra caviar because of the paddlefish eggs similarity to “the real thing.”

Koerner grows young paddlefish for putting out in small quantities and low densities as juveniles into lakes, fish ponds and other facilities such as quarries once mined for sand and gravel. They are left to grow naturally without being fed, and eventually Koerner harvests them for their caviar.

She sells her caviar for about $25 an ounce (imported caviar can sell for as much as $150 an ounce). The market has responded and there’s demand for her caviar, which has been used on a few occasions at the James Beard House culinary centre in New York and in various white-tablecloth restaurants in Cincinnati and Chicago.

At the centre of the business is Koerner’s Big Fish Farms company, which recently moved its main location from Kentucky to Ethel, Claremont County, Ohio. Here Koerner has a 2.5 acre pond that houses some 25 broodstock for producing her stocking juveniles.

The farm also has a 100,000-gallon tank the juveniles go into until they’re ready to be planted out.

The idea for free-ranging paddlefish for their meat and eggs came from Mims, who she said has been extremely helpful throughout the process. Mims has provided additional fish for her to use to practise making caviar, so that she can improve the quality in preparation for her own fish to begin producing the luxury food.