The pristine waters of British Columbia provide Stellar Bay Shellfish the ideal growing conditions for its oysters for known their small size but plump meat. 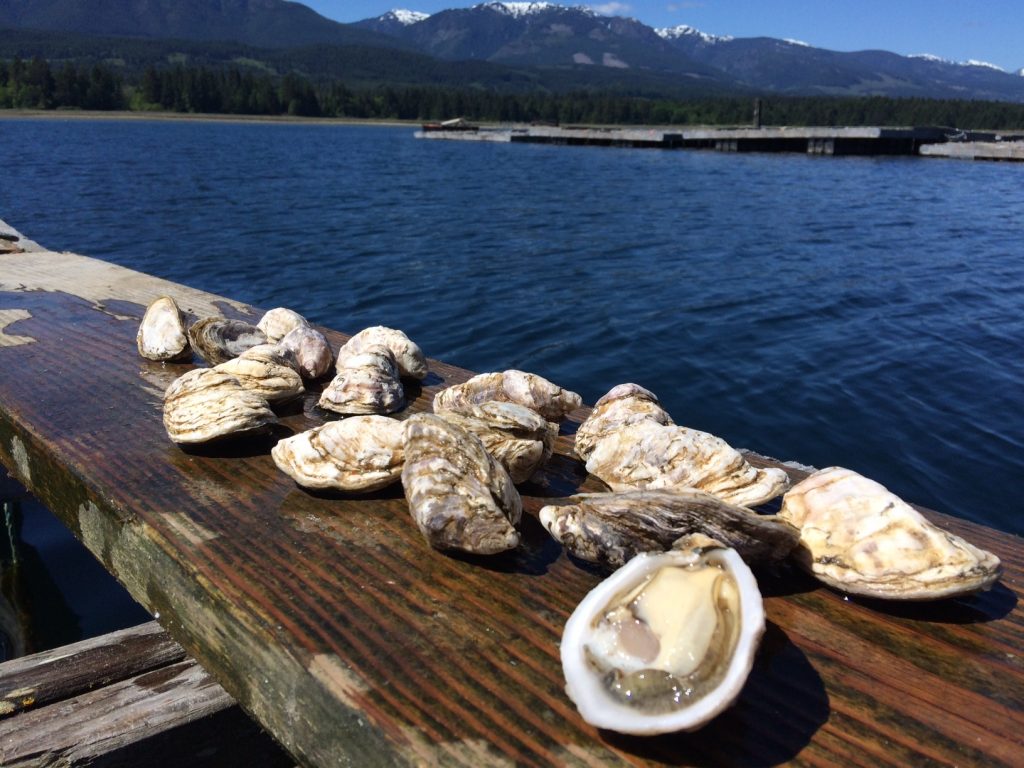 Like many kids on the east coast Vancouver Island in the ‘60s and the ‘70s Keith Reid grew up messing around with boats and the sea.   “I worked for an oyster farmer in the summer,” recalls Reid. “I apprenticed as a wooden boat builder and worked at that for about 10 years and then I was a commercial fisherman during the 1980s.”

“My dad had a small oyster lease here in Deep Bay, but it was something I tried to stay away from,” Reid chuckles. “I knew, from summers as a kid, how much hard work it was. “

But the wild catch was dwindling and there were too many boats in the fleet.   “They would do crazy things like have a two-hour opening (for fisheries),” says Reid.

He started to look for something else to do in the winter to balance out his fishing season and help support his family. “My dad was just ranching his oyster lease, he didn’t produce a lot of product. But the more I looked, the more I saw the incredible potential. The environment in Baynes Sound is so ideal for growing oysters,” says Reid.

Baynes Sound is a narrow protected channel between Vancouver Island and Denman Island in British Columbia. Some 25 miles long and between one and two miles wide, it produces 50 percent of the cultured shellfish in BC. Deep Bay is tucked inside a peninsula that juts into the sound.

Tapping into that potential, Reid started Stellar Bay Shellfish, now one of the largest half-shell producers in BC and indeed all of Canada. “I started my oyster education in 1991,” Reid says. “I asked my dad if he’d sell me his lease and he gave it to me. For the first couple of years I worked the oysters and the salmon boat together but by 1993, I went full time into oyster farming.”

That original 30-acre lease of his father’s has been expanded to 130 acres. Roughly 98 percent of the oysters have been moved off the beach out into deep water and Reid has built a stable of customers across North America and Asia for his specialty, Kusshi oyster.

“Kusshi”– Japanese word for “precious”– starts as a Japanese oyster seed (Crassostrea gigas) that is carefully managed in deepwater trays. “It’s proprietary,” says Reid, “but I can tell you we screen and sort a lot and we use custom-built equipment to tumble the oysters. The result is a cocktail-size product after 18-24 months of grow-out.”

It’s a lot more labor-intensive than other grow-out systems, Reid admits. And there’s a lot of work to manage the inventory. “I need to be sure that I have enough product in November to last me through the winter to the start of growing season in April.” He currently tracks stock in 80,000 trays, but expects to nearly double that this spring, bringing another 50,000 to 60,000 trays into production.

Seed supply is a perennial problem for oyster growers on the Canadian west coast. “We don’t have enough production capacity here right now. We have several hatcheries that are expanding and I buy some product from every one of them to spread out the risk,” he says.

He plans to buy 60 million seeds this year. “I couldn’t risk the chance that one or two growers might run into a problem and couldn’t deliver.” For that same reason Reid says he wouldn’t build or rely on a hatchery of his own.

He says he is buying about 50 percent of his seeds from Chile. “I have been working with a company down there to select some of the broodstock traits that I want for the Kusshi oysters.”

A group of hand-picked distributors deliver product locally, to the east coasts of Canada and the US and down the US west coast. About 80 percent is exported, with the US market accounting for the majority of that, while Asia accounts for about 5 percent. “We are slowly working to develop markets in Asia for our increasing production,” Reid says.

His processing plant is styled after a Boca Raton Florida mansion, featuring a 20-foot fountain in front. Although Stellar Bay ships out all of its oysters to seafood distributors, Reid’s vision during the building’s construction was to offer an “attractive place” for people to come and buy oysters. There are no tired flatbed trucks rusting in the yard, nor dilapidated boats pulled up on the shore.

“We have worked really hard to build social license along the coast,” he says. “At one time there was a petition out there to get oyster farms pulled out of the water. Now, I am the largest employer in the area.

“When I go to a meeting about a new development in the region, I don’t have to sing about water quality, I have other people championing that for me.”

Bleak outlook for BC

But while he has built a successful business, Reid is not optimistic about the growth of the oyster industry in BC. He describes it as “paralyzed.” “You can’t get a lease, you can’t get a permit to expand a lease, or to change a management plan, or to add a new species. You submit an application, it goes into the system and just sits there.” Some leases are only renewed for one year and that’s not enough security to take to the bank when one needs financing, he adds.

The problem, he says, is the process of First Nations consultation and a lack of agreement between the provincial and federal governments. One level of government will say there has been enough consultation but the other will disagree. “They say that the First Nations do not have a veto, but it has certainly stopped the industry from moving,” he says.

As with salmon farms in BC, the dispute is about the rights of First Nations to decide what goes on in their traditional territories. “That’s something the governments have to work out,” says Reid. “And until they do, we are at a standstill.”