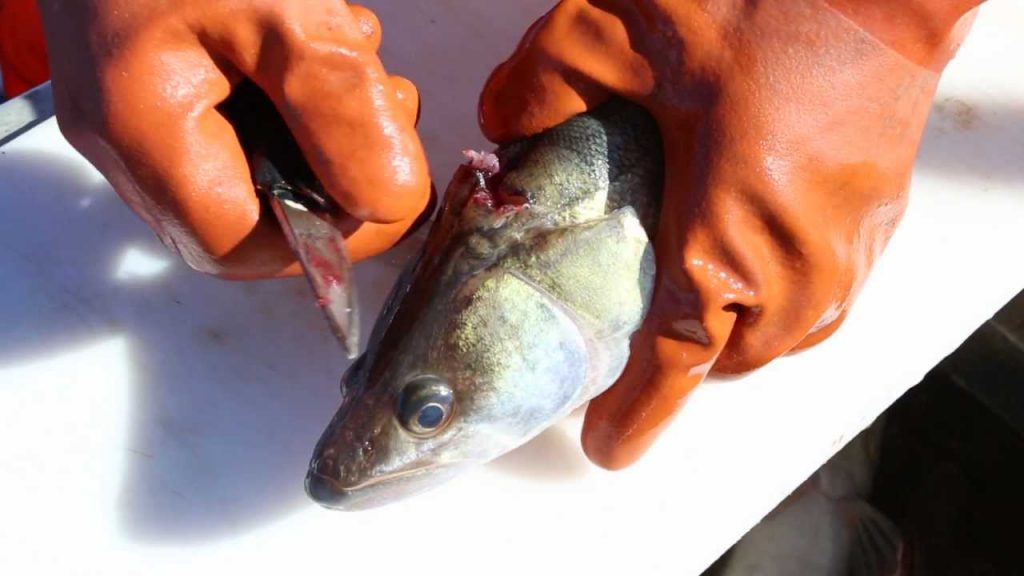 Andrew Tsui, president of the Ike Jime Federation, asked the audience this question at the end of his presentation: “Are we actually content to accept that at the time of the harvest – after all of the energy, research and investment that you have put into each of these fish – you hand it over to race against time, and say: ‘That’s it. Let us just hope this stays fresh’?”

Tsui was speaking at the 2016 Aquaculture Innovations Workshop in Roanoke, Virginia in August. At that workshop, he said the conventional method was to harvest the fish then put it into a container packed with ice, where it “exhausts itself to death.” This state of stress, he said, causes a spike in lactic-acid production, muscle activity and respiration. Body temperature goes up. It trashes, struggles, dies and enters a state of rigor mortis. After rigor, decomposition quickly sets in.

And when quality suffers, so does the price.

Tsui and John Davidson, a senior research associate at the Conservation Fund’s Freshwater Institute, presented at the workshop their collaborative study, Ike Jime: Lessons from the Japanese Method of Humane Harvesting to Optimize the Eating Quality of Atlantic Salmon.

They discussed two humane methods of harvesting fish: one that’s steeped in tradition, and another that uses technology. While they are different, both methods seek the same result: to keep fish in a state of rest at the time of death in order to achieve peak freshness, quality, texture, color and taste.

Davidson admitted he didn’t know a lot about Ike Jime when he met Tsui a few months ago. He said he did not realize until then that this highly regarded process of slaughtering fish was very similar to the humane stunning technology that’s already in use at the Freshwater Institute.

Tsui pushed for Ike Jime, the centuries-old Japanese method of harvesting fish, which is “widely regarded as the most credible and dynamic way to preserve the integrity of fish for raw consumption.”

“Ike Jime is a multi-series steps of controls and these steps are designed to mitigate all the effects of biochemical reactions,” he said. The method requires severing the spinal cord to prevent further depletion of adenosine tri-phosphate, the energy used by an organism in its daily operations, according to The Ike Jime Process vs Freshwater Institute Protocols (see chart).

The selling point of the Ike Jime-harvested salmon is the “story of its freshness,” It produces a sashimi-grade harvest that commands a price that is at least 150-percent higher than that of conventionally slaughtered fish, depending on the species.

Humane stunning technology is used in the salmon RAS production systems at the Conservation Fund’s Freshwater Institute, said Davidson. The institute started using it five years ago and has since upgraded to an S1-7 stunner.

Unlike Ike Jime, Freshwater Institute’s protocols do not destroy the spinal cord. Also, it uses a depuration system to remove any potential off-flavor in the salmon.

After depuration, the fish is moved down a channel. “The nose of the fish triggers a pneumatic piston and the piston strikes the fish at the brainstem. The fish is immediately rendered dead. We have the option for a blade to come out and cut the gills. From this point forward, the fish is forced through the channel into an ice bath to cool the body temperature,” he explained.

He said this stunning technology, manufactured by Seafood Innovations, is readily available in the market.

Members of the British Columbia Salmon Farmers Association use this process.

“We have two converging paradox,” Davidson said. Ike Jime’s strengths are how it affects and improves the quality of the product. The Freshwater Institute’s RAS production systems, on the other hand, have many advantages such as having fish easily accessible in a tank. He said it took an average of only 10 seconds to take the fish out of the tank and through the stunning technology.

“We feel that these ideas have a great potential to converge and create ultra-premium products that may bring a premium price,” he said.

Samples of the fish were sent to a collaborator at West Virginia University. Specific variables surrounding product quality were measured, using the Freshwater Institute’s specific measurements for color, texture, muscle pH variety, and other parameters at one and seven days after processing.

Davidson said the stunning technology produced a higher pH level, which was attributed to “a little bit less struggle” because the spinal cord of the fish was not destroyed.

But basically, the two techniques produced quite similar results in terms of pH and color. The study provides preliminary evidence that the SI-7 stunner results to very similar levels of peak freshness in Atlantic salmon as the highly regarded Ike Jime technique.

There are plans to look at flavor profiling that are statistically comparative. Meanwhile, Tsui has gathered anecdotal observations that described the taste of fish harvested using both methods as “phenomenal.”

As part of his research, Tsui looked for sushi restaurants in random cities in Texas, Alabama, Nebraska, Kentucky and Louisiana and was surprised by their prevalence. He also noted a dramatic shift in consumer demand for premium seafood products prepared as sashimi/sushi, crudo, cerviche and tartare.

“What it says to me is that Americans want to take their fish seriously,” he said.

Tsui and Davidson’s “modest proposal” to salmon farmers is to use Ike Jime and the humane stunning approach because of their “profound benefits.”

“I think the most important thing to be able to create great sashimi quality,” Tsui said. “I think that it is important to have continued transcultural, interdisciplinary collaborations and continued investment in RAS technology, and have smart, more direct and relevant marketing campaign parameters.”