Freshwater is used to treat amoebic gill disease (AGD) in salmonids but when it poses a logistical challenge, hydrogen peroxide treatment may be used. The effectiveness of the results, however, depends on the water temperature. 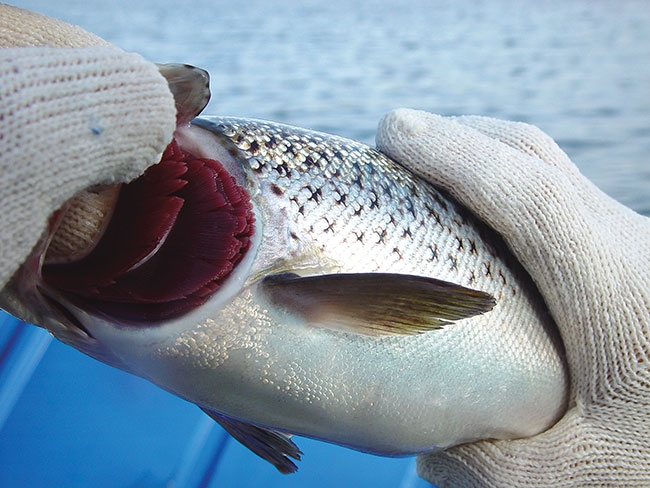 Treatments were performed in tanks with aerated seawater (33‰ ± 2‰). Doses were decreased as the temperature increased.

At 8°C, subsequent development of AGD infection was delayed substantially by roughly 8.5 weeks, compared to 1.7 weeks at 12°C and 1.5 weeks at 17°C.

AGD is a pathogenic disease in salmonids caused by Neoparamoeba perurans.  It attacks the respiratory system of the fish, causing lesions or white and gray mucoid spots on the gill surface, which lead to reduced gill function. Infected fish are lethargic and exhibit reduced swimming activity, increased respiratory rate, reduced feed intake and reduced growth.

“Hydrogen peroxide as treatment for AGD was shown to be successful for all combinations of doses and temperatures tested. The gills partially recovered following treatment and further development of the disease was delayed. However, all groups developed the disease again after treatment, suggesting that fish were not cured,” the authors wrote.

The same was observed in the freshwater treatment.

“Both freshwater and hydrogen peroxide treatment may cause mortalities as the fish is already weakened by the disease and the treatment itself can cause additional stress to the fish. Neither treatment seems to be fully effective, as AGD reappears in treated fish, both under natural and controlled experimental conditions.”

“Furthermore, it is important for both economic considerations and fish welfare that the method used is both effective and gentle on the fish,” said the authors.