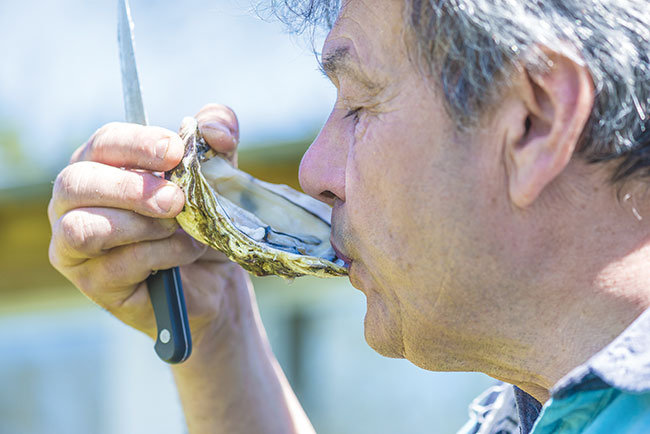 During the first 20 years of my professional career, I taught courses in aquaculture, environmental conservation, and related aquatic subjects in the Agriculture Colleges of three land grant universities. Discussions with colleagues in animal science, agronomy, and range management frequently involved the relative efficiencies of production and what could be done to promote sustainability.

Shellfish have several advantages in addition to being endothermic. Perhaps most importantly, they obtain their food by filtering organic particles from their environment. Their primary source of energy and nutrition is the base of the food pyramid; they are vegetarians, thus providing an important ecological link between the benthic community and the water column community. The shellfish farmer simply has to locate his/her stocks in clean, productive environments. Shellfish farmers who operate nurseries to start the young animals in captivity do have to maintain algae production systems, but after setting their stock in grow-out habitats, nature provides the food.

My colleagues in the other departments usually acknowledged, albeit grudgingly, the inherent production advantages of rearing aquatic animals for human consumption. They have devoted their professional lives to animals such as cattle, hogs, or poultry so, naturally, they had strong allegiance to their work and the animals on which that work was based.

Among aquatic and marine animals used in various forms of aquaculture, shellfish are inherently efficient. The amount to feed needed to produce a measure of edible flesh for human consumption is substantially lower with these animals than what’s needed to produce an equal measure of beef or pork, or even poultry. Efficient conversion of feed into edible flesh is but one of the advantages of farmed shellfish.

Another advantage for the sessile animals used in shellfish culture is they have no “operational costs” for fighting gravity. Oysters, clams, and mussels simply rest on a substrate, filter the water surrounding them, and grow. In contrast, fish, crustaceans, and terrestrial animals use substantial amounts of energy moving about and remaining upright. The lack of motility by shellfish also means that shellfish farmers do not have to spend material and financial resources preventing escapes. Only the larval life stages of these animals are motile. How reproduction is managed varies from location to location and farmer to farmer.

Although filter-feeding shellfish have remarkable capabilities for improving the quality of the waters around them, they have limits to their abilities. Entire natural populations of shellfish, as well as farms, can be wiped out by toxic discharges from land-based industries. Less-than-lethal toxic discharges can cause a related problem for shellfish; the bioaccumulation can be at levels harmful to humans eating the contaminated animals. In similar fashion, bacteria and viruses may accumulate in the gut of oysters, clams, or mussels. People who enjoy raw oysters may put themselves at risk of serious health problems if the oysters came from contaminated waters, especially those individuals with compromised immune systems. (As a side note, I ate raw oysters at a farm located on Long Island Sound while visiting the site with students in my aquaculture class. After seeing me eat one, many of the students were willing to try the delicacy. Even though they had been born and reared in New York City, they had never experienced raw oysters.)

Despite its proven environmental and consumer benefits shellfish farming unfortunately continues to face opposition in the form of protests by shore residents who consider the array of structures used by farmers and the restrictions on uses of near-shore waters to be incompatible with their uses. Any form of animal production that takes place in the “commons” (i.e. publicly owned waters or land) typically faces opposition. Shellfish farming will probably continue to face challenges in some communities because of this NIMBY (Not in my Backyard) mindset. The fact that shellfish farming is ecologically efficient and environmentally beneficial should support its continued development as a part of sustainable food production for our nation and the world.