Are there opportunities for North American producers beyond the ‘live’ market? 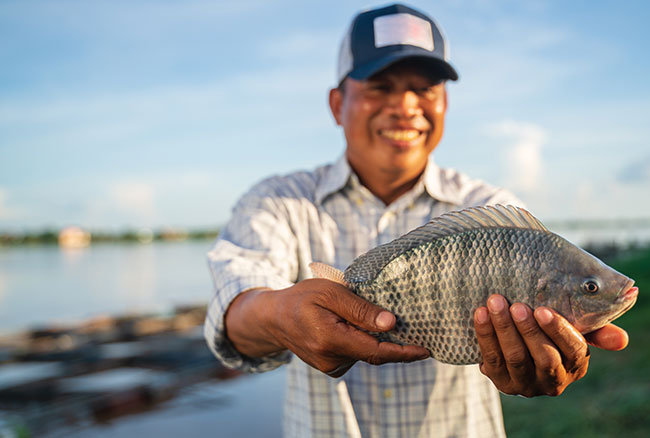 Asia and Latin America own the tilapia market, both fresh fillets and frozen.

Their dominance as producers is evident in just a few facts. China alone accounts for almost one-quarter of all farmed tilapia production, which is close to 7 million metric tons globally.  And Brazil, which farms well over a half million tons, is growing at almost 10 per cent. The vertically integrated world leader Regal Springs, with facilities in Mexico, Honduras, and Indonesia, recently received a capital commitment of $14 million that supplements more than $20 million invested in operations during the last two years.

In the face of such market control, the only significant slice of the market open to U.S. producers has been in live fish, which Kevin Fitzsimmons, one of the world’s foremost tilapia experts, calls a “fairly legitimate production industry.”  Here, companies like Virginia-based Blue Ridge Aquaculture have served the preferences of both Asian and Hispanic communities over the past two decades.

But, as North America’s taste for tilapia continues to grow—and it is—so does an interest in what’s fresh, traceable, and locally grown. And, what if a U.S. producer doesn’t care about being a speck on a bar chart but has other business and personal values instead?

Warmwater species
The ideal temperature range for growing tilapia is 28-30 C (82-86 F).  In North America, that translates into either a recirculating aquaculture system (RAS) in a building, under a greenhouse, or in southernmost Texas or Florida.  Another opportunity arises with geothermal water, which has spawned tilapia farms in Idaho, southern California, and Arizona.

The climate in North America presents challenges and so do the economics.  The higher costs of labor, land, and utilities all contribute to a relative disadvantage, which even extends to transportation. For example, America exports machinery, vehicles, and plastics to Latin America. “But there’s not that much coming back other than cut flowers, fresh fruits, and seafood, so they get a really good rate,” said Fitzsimmons.

A taste for tilapia
Tilapia is now the fourth most popular fish in the US.  Whether it’s picked up as a fast-food sandwich or chosen as the center-of-the-plate protein for a healthy home meal, inflation-sensitive consumers today particularly appreciate its low-impact on the wallet.  A recent price-check at Walmart registered a 60 percent higher price for Atlantic salmon fillets than for tilapia fillets.

Barton Seaver, a chef and expert in sustainable seafood, calls tilapia a “palate for flavors, whatever you want—cumin and coriander, Cajun seasoning, blackening spice.”  In videos, where he demonstrates how easy it is to cook even in a toaster oven, he has praised tilapia for its “clean, lean taste” and its health benefits, which compare favorably to salmon in protein, though not omega-3 content.

Live market
In North America, both Asians (Chinese, Koreans, Vietnamese) and Hispanics prefer fish that is as fresh as possible—and thus buy it live.  Producers truck live tilapia to metropolitan areas in Toronto, the Northeast, upper Midwest, and Pacific Northwest, as well as California and the Southwest region.

But as North America continues to become even more diverse, so do opportunities to sell tilapia beyond urban markets.

That’s what John Lambregts has been doing for over 20 years in southeastern Idaho in a town with a population of 938.  He has taken advantage of the area’s geothermal springs that stay 83 F year-round, even when the thermometer only reaches 10 degrees.  They yield 1,000 gallons a minute for his outdoor circular raceways.

Lambregts, a native of the Netherlands, calls the operation Dutch Boy Farms.  He currently produces about 250 tons a year and will double that by the end of 2023 with a new property he has acquired.  Two more facilities are in the pipeline, he says.

“We are a long way from anywhere,” he added, but customers drive two hours from Ogden, Utah, in the south and two hours from Hamer, Idaho, in the north to get live tilapia, as well as largemouth bass, channel catfish, jade perch, and barramundi.  Most customers are Hispanic and repeat buyers.  They bring a cooler and often take fish to visit family out of state, explaining to Lambregts “because you’ve got the best fish.”  These customers are willing to drive and pay more for fresh fish rather than buying it frozen in a big box store for less, he says.

The retail business he conducts on Saturday is only 10 to 15 per cent of the total.  The balance is sold through distributors primarily to retail markets and a few restaurants.  COVID-19 killed a big part of his restaurant business, though his website still posts a January 2020 Seattle Times restaurant review that extols the Dutch Boy Farms tilapia in a Sichuan hot-and-sour fish bowl, saying “It’s fresh and firm, velvety and tremulous. It doesn’t flake apart on contact, like lower-quality fish can tend to do.” 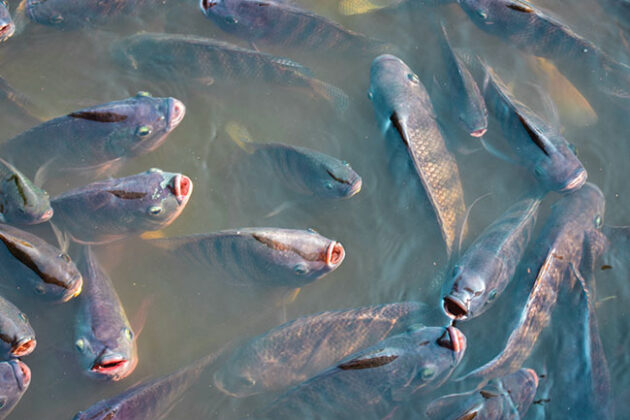 Largest indoor producer of tilapia—in the world
Blue Ridge Aquaculture in Virginia hopes to tally up its best year yet in 2022, according to Martin Gardner, who was named president last March. And that’s despite the setbacks of Covid.

Founded in 1993, this RAS producer opened a larger nursery in 2021 and a new feed mill in 2017.  It owns everything from its own broodstock through to the trucks that carry live tilapia to distributors for Toronto, Boston, New York, and Washington DC. Because of its vertical integration, Blue Ridge has been able to keep its prices “competitive” compared to smaller producers for the live market, says Gardner.

“It’s a premium price but it’s a niche market,” he added.  “We’ve been positioning Blue Ridge for an expansion over the past eight years.  We have always wanted to expand into the fresh fillet market,” he says, though the company has not started that project yet.

“We recognize there’s a void in the marketplace for a value-priced, sustainable, white meat fish, one that’s domestically produced. We offer a lot of the attributes that consumers are looking for: very fresh, sustainable, local, no antibiotics, no hormones, traceable,” echoing what RAS producers like Florida’s Atlantic Sapphire have been saying about Atlantic salmon.

He added, “Controlled environment agriculture would be a natural tie for our business.  Not only can we tap into the nutrients in our effluent, but we can capture the heat from our facilities that we currently exhaust.”

What’s next?
Today, the fresh fillet sector of tilapia farming is dominated by Latin America (China has its hold on the frozen products).

In looking to what’s ahead for US producers, Kevin Fitzsimmons, a past President of the World Aquaculture Society, sees growth—but “relatively slow growth, where people can develop niche markets, whether that’s white tablecloth restaurants, more Asian grocery stores and restaurants, or farm-to-fork situations where consumers are willing to pay a little bit more for fish that’s locally grown.”

Still, it can be “pretty lucrative.”

Another positive development he spotlights is the talent being nurtured by high school aquaponics and aquaculture programs. Maybe one of these students will follow in the path of Trevor Kenkel, who launched Springworks Farm when he was a freshman in college in Maine.

Today, this aquaponics farm’s organic lettuces can be found in New York area Whole Foods as well as 184 New England Hannaford supermarkets. Its tilapia retails at Maine’s Harbor Fish Market, a high-end purveyor of lobster and fresh seafood.  Springworks’ website teases, “Look for an exciting announcement from us soon about where you can find fresh tilapia fillets near you!” although the company was not available for comment.

Many critics of the food system are crying out for small, sustainable, and local production. That could be a calling for fish farmers, too. And, as John Lambregts from Grace, Idaho, pointed out, “I live and work where people go on vacation.”