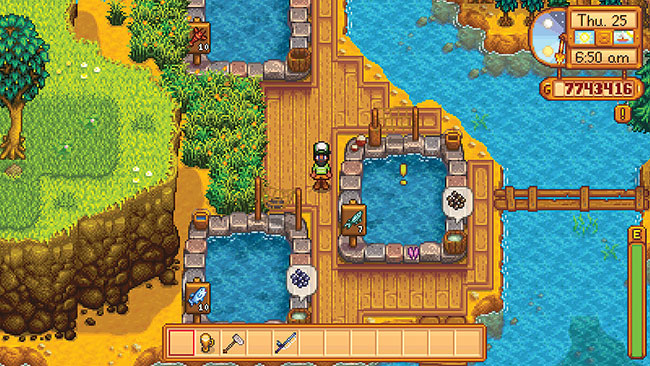 A video game that recently incorporated fish farming into the game’s environs could help spread the word about aquaculture. Terrestrial agriculture and fishing have been staples of the video game Stardew Valley since its release in 2016. But with the game’s most recent update late last year, aquaculture has arrived on the farms “cultivated” by millions of players around the world in the form of fish ponds.

“Stardew Valley’s always had fishing as part of the game but typically you had to go outside of the farm to find a river or the ocean to fish,” says the game’s creator Eric Barone. “But there was nothing related to fishing on the farm itself and I wanted to incorporate that.”

While the ponds represent a very simplified iteration of aquaculture (aquatic life are simply thrown in the pond and they begin multiplying), there is a pleasing amount of intricacy. Farmed fish and shellfish may produce roe that can be aged or, in the case of sturgeon roe, processed into caviar.

Aquaculture stakeholders lament the fact that children are often taught about farms on land but not about ocean farms. While Barone’s primary focus is always on creating game elements that are fun, he also aims to broaden the player’s understanding of food production methods.

“I hope the game teaches players some things that they might not know about farming,” he said.