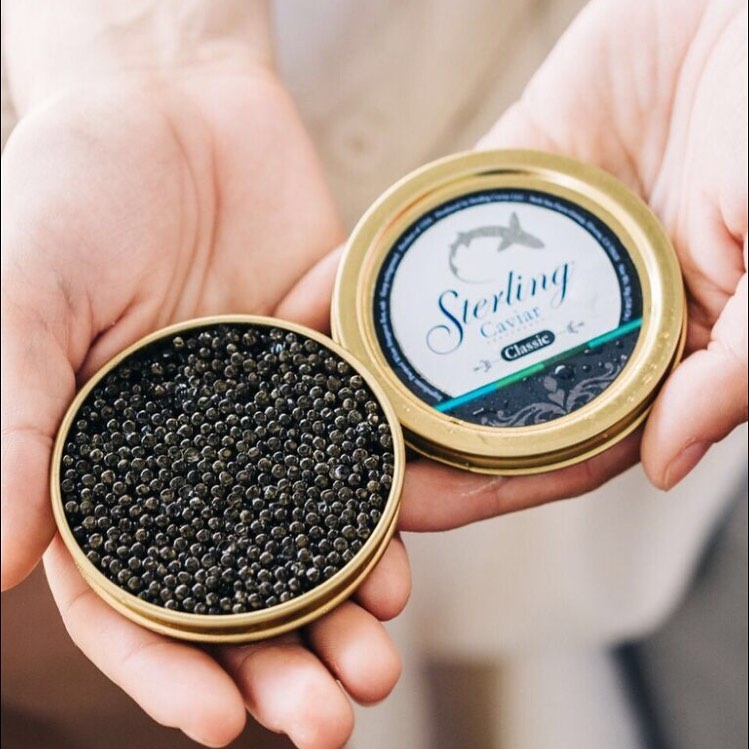 Consumer demand about where their food comes from, not their sentiment about the Ukraine crisis, will remain the driver for demand for caviar in the US, says Sterling Caviar, a producer based in California. (Photo: Sterling Caviar)

Disruptions in seafood trade due to the Ukraine crisis has spread to the caviar market, with many distributors in the US distancing themselves from Russia, the source of what many consider as the best quality caviar.

Olma Caviar, a large operation in Brooklyn, has an affirmation on its website that left no doubt about its support of Ukraine:

“We at Olma are deeply concerned with the situation in Ukraine and our friends and family there. We strongly condemn Russian aggression. Our customers may rest assured that we don’t import any products from Russia. You may help Ukraine by donating to the International Rescue Committee.”

Chuck Ladouceur, manager of seafood at Bianchini’s, an upscale market in San Carlos, CA, south of San Francisco, had a different slant:

“We usually carry Russian caviar on the holiday and we have had a couple of customers asking about us not stocking it. Although I agree with the people in the Ukraine and their defense against Russian invasion; but if a customer wants Russian caviar I will get it for them.”

The Caviar Company president and co-founder, Petra Bergstein Higby, said part of the reason she and her sister started this company in 2015 was to introduce consumers to the amazing variety of caviar beyond Russian caviar.

“When we were getting started, we were excited about our local favorite – California white sturgeon, and did get feedback from people saying that ‘everyone knows only good caviar comes from Russia.’”

What a lot of people don’t know is that US purveyors of the luxury food haven’t been selling Russian products for years. Nothing in the US is coming from the Caspian Sea. It’s all farmed in places like Israel, Uruguay, China, France, Poland and many other countries.

“The reason why it’s still referred to as “Russian Osetra” is because its lineage is from the Caspian,” she said. “There are so many other varieties of caviar from other species of sturgeon that are really spectacular – that’s why we do what we do and sell the varieties we sell.”

Sterling Caviar’s Alan Morris had some eye-opening slant regarding the impending sanctions on Russian caviar.

“We are not, and would not be, directly affected by any import sanctions,” he said. “All the caviar we sell is grown and harvested by Sterling Caviar here in California. Most other purveyors and farmers, who supplement their supplies from outside sources, may have to make some adjustments.”
Sterling is licensed to export its caviar to most countries, but sanctions imposed by Russia in 2014 mean that when it receives inquiries from potential customers in Russia, they must turn them away.

If passed by the Senate, the US-Russian Seafood Reciprocity Act would ban seafood imports from Russia to the USA. Morris said the Act mirrors the ban on US-produced seafood to Russia that’s been in place since 2014.

Sterling has a widespread customer base. Domestically, the company sells directly to consumers online and to a wide range of retailers, restaurants, and caviar resellers. It exports across the globe to distributors who are licensed to trade in caviar and sturgeon meat.

Morris says it’s difficult and early to say if the Russian-Ukraine conflict has affected sales.

The company has seen increased demand over the last several years from customers who want to buy caviar grown and produced in the US, as well as caviar that they know is coming as directly as possible from the farm.

This includes not just the domestic market, but other countries who want to buy US products because of food safety controls and transparency of the source. He expects these factors will be a much greater influence on sales than consumer sentiment about the situation in Ukraine.

“There is no such thing as Russian caviar: more than 80 percent of caviar eaten here comes from China – very cheap!

“For some inscrutable reasons, the US FDA does not enforce the existing country-of-origin-labeling law on caviar and instead allows the vendors to simply label (the goods) as ‘imported.’ Not surprisingly, most consumers assume that that means it came from Russia or somewhere from Eastern Europe. We, the US caviar farmers, have a heck of trouble because of the cheap Chinese caviar dumped here.”

At the “House of Caviar and Fine Foods” in Fort Lauderdale, Fla., there is no doubt about Russian caviar on the shelves.

“We did stop any business with Russia and took out Russian caviar from our list,” said owner and CEO Max Mogheddam. “You can’t believe it; customers don’t want to hear about ‘Russia’ at all!”