The prehistoric fish takes an epic time to mature. After harvesting, there are still a few more steps to ensure the quality reflects its premium price. 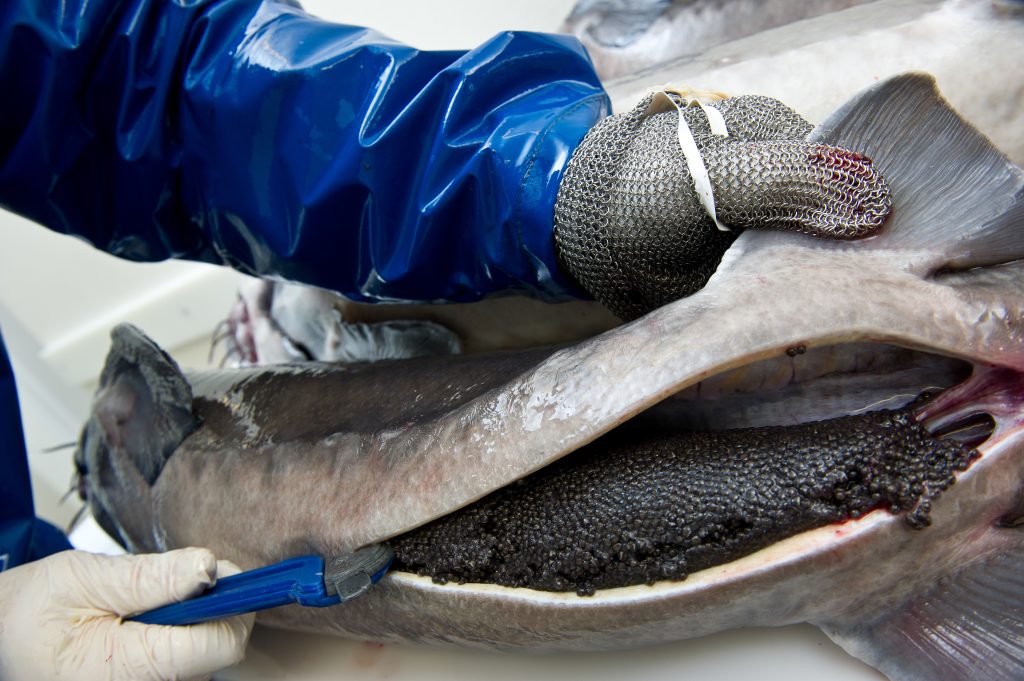 Sturgeon takes a very long time to grow, prompting Justin Henry, director at Northern Divine Aquafarms and president of Henry Aquaculture Consult, to refer to it as “the tortoise of RAS.”

It takes them 11 years to grow to maturity.

Practically all parts of the fish are sold. The fins could be used as substitute for shark’s fin. There is also market for the head, spinal marrow, gizzard, liver, swim bladder and the skin.

“When we think about sustainable fish production, we have to think about more than the production method. It is also about what you do with the meat after you have harvested it,” Henry said during a presentation at the 2017 Aquaculture Innovation Workshop in November in Vancouver.

He was GM when he resigned from Northern Divine Aquafarms, located in Sechelt, British Columbia, where he had worked for 20 years. He started Henry Aquaculture Consult in 2017.

In terms of food preparation, sturgeon is very versatile and could be served as ceviche, sashimi, poached, roasted, grilled, smoked, baked barbecued, and kebab, fondly called “dinosaur on a stick.”

The very dense and meaty fish is more like meat than fish. “We actually have to age the product for a week before it goes to the restaurants or retailers,” he said. The fresh meat goes to the “choicest markets” in British Columbia.

The company is the sole producer of organic-certified farmed Fraser River white sturgeon in Canada. Henry said being certified organic has helped. Its products, which include vegetables grown in an aquaponic system, are recommended by Ocean Wise and recognized Best Choice by SeaChoice and SeafoodWatch.

They started their sturgeon production in the late 1990s when management stumbled upon the value of sturgeon caviar. Henry was in London when he passed by Caviar House & Prunier shop. He saw that sturgeon caviar was selling for about $5,000 a kilo. At that time, Northern Divine was producing salmon caviar, which sold for a hundred-times less.

“We knew that this caviar were from wild sturgeon, whose stock was in steep decline. So it triggered a thought which was really the genesis of Northern Divine Caviar,” he said.

Quality is a must

They built their first RAS in 1998, and the first RAS for grow-out in 2000. The first roe harvest was in 2011, when the sturgeon reached maturation.

Henry stressed that farmers having an organic RAS system should not bank on this distinction alone.

“No matter which species you are growing, and no matter how big and shiny your system is, if you are growing out to harvest, you have to manage for off-flavor. It has been presented on many times in the past. But the messaging has not been clear enough because RAS farmers still put off-flavored fish in the market,” he said. “Please stop doing that. You have to wait.”

He said there’s a need to build a proper finishing system and to wait for as long as it takes. Salmon might take one or two weeks, sturgeon about four and “way, way longer” for caviar.

“In the market, quality is number one no matter how sustainable the fish is. If you put off-flavored fish in the market, the quality is crap and you should expect the price to reflect that,” he said.