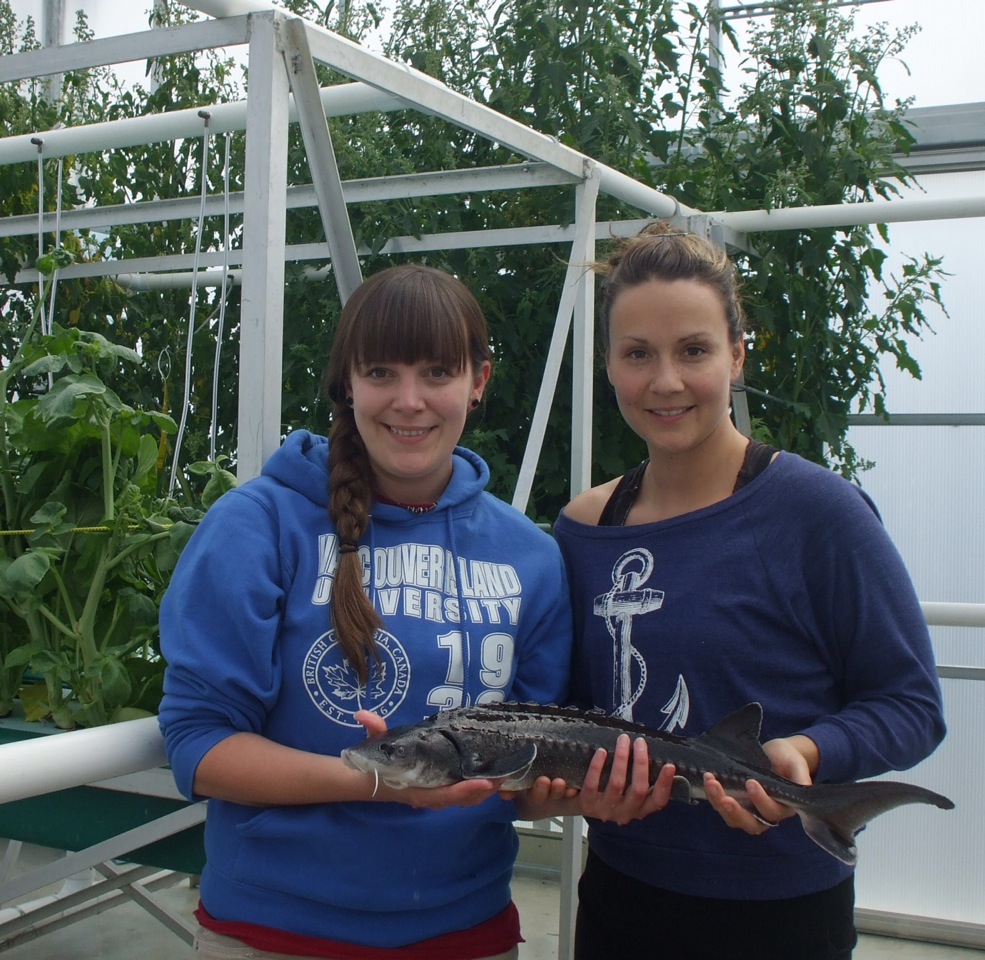 Much of the work on aquaponics in the last 30 years has been from a horticultural approach – incorporating fish into an existing hydroponics or traditional farming configurations. In these cases, fish are considered a secondary part of the process and little of the rearing protocols are reflective of current aquaculture practices.  Typically in these systems, the fish provide no or little financial gain, but are used mainly as a source of nitrogen and phosphorous.

Aquaponics focused research has also concentrated mostly on warm water systems (79-86oF, 26-30oC) using tropical fish most often in tropical locations where water can be heated without a significant cost. There are however opportunities for aquaponics systems using cooler temperatures, such as those that would be suitable for sturgeon, salmonids and other freshwater or marine fishes found in colder climates.

Aquaponics, which here refers to the marriage of aquaculture and hydroponics (growing plants in soilless media), has been practiced in some form or another for millennia, and its success is due to making use of the natural cycles evident in healthy ecosystems. As we learned more about biological systems, we have been able to use that knowledge to benefit many industries, including aquaculture.

Aquaponics takes the knowledge of common biological synergy – the microbial role of nitrification in biofiltration – one step further, i.e., the nitrate produced through biofiltration from the ammonia excreted by fish is used to support plant growth. This plant growth may in turn be used as a mechanism to reduce the nutrient load in the wastewater.

Public appreciation of aquaponics is growing as research from authors such as Drs. J. Rakocy, W. Lennard, and N. Savidov is being published in journals focused on integrative food systems, aquaculture, horticulture and others. This is partly because aquaponics has a number of benefits over traditional soil based growing.

While these claims have been attributed to the complexity of the nutrient profile available in aquaponic systems, they need to be further verified through other mechanisms, such as chemical analysis and double blind preference tests. The potential of aquaponics as a business model is still in the early stages and requires more exploration.

At Vancouver Island University (VIU), located in the Province of British Columbia, Canada, we have been examining just how effective cold water aquaponics can be. VIU has cold water fish culture systems and a newly constructed greenhouse entirely dedicated to this question.

To maximize our potential plant growth while also addressing one of the common challenges of current aquaponics systems – replacing less valuable fish, such as tilapia, with higher value fish – we have been using white sturgeon as our experimental fish.

Sturgeon are grown worldwide for aquaculture, both as a source of meat and caviar, and are known for their suitability for RAS rearing. White sturgeon are particularly well suited for use in both aquaculture and aquaponics systems.  As an aquaculture species, they grow quickly, have excellent food conversion ratios, show no evidence of grilsing or jacking, are extremely tough, and have high market value, both for meat and, of course, caviar.

Characteristics that make white sturgeon a good choice for aquaponics include: they are carnivorous (need a high protein diet), have a broad thermal optimum, and are relatively tolerant to ammonia and nitrite as well as low pH – which is preferred by plants for nutrient uptake.

VIU is unique as a research center in that it has white sturgeon and steelhead salmon available in many cohorts (sizes/ages), and this greatly increases the diversity of aquaponics research questions that can be addressed.

In creating an aquaponics system design, we chose to maximize our versatility because aquaponics systems can be run in a variety of ways, and we wanted flexibility to perform a suite of different experiments. We incorporated a series of different hydroponic growing technologies into a RAS system in a way that each component (fish side and the plant side) could be run as a fully or semi-recirculating system, but could also be changed to flow-through if necessary.

In our first trials, 1 year old white sturgeon were held at aquaculture relevant densities (to the limits of the biofilter) in rearing tanks located in the greenhouse, water and air temperatures were controlled independently. Following germination, seedlings planted in RockWool™ plugs were introduced into the system with water temperatures ranging between 64.4 and 68oF (18 and 20°C) and only natural light. Because aquaponic systems generally become more acidic over time, we added alkaline compounds containing potassium, magnesium, calcium, and iron at regular intervals, but also measured these elements in the water at least weekly.

Our first objective was to provide “proof-of-concept” data to support aquaponics incorporation into coldwater fish rearing RAS technology. We started growing in January of 2014. Within 2 months we could already see signs of good growth from the plants, despite the short daylight hours and the immaturity of the system (aquaponics systems become more productive and stable over time).

Growth performance of the white sturgeon was good overall, although there was an acclimation period to the greenhouse conditions that could be reduced with an altered design.

After testing a few different configurations, currently we are running two similar 5 metric tonne systems. Each system consists of two fish tanks (1.4 metric tonnes of water each), a water clarifier, a biofilter, a main sump, six deep water culture (DWC, “rafts”) trays, one media bed (media type is porous clay balls), four vertical growing towers, and ten rows of nutrient film technique, with a total effective growing area of approximately 50 m2.  This allows us to have the capacity to experimentally examine various growing parameters of both plants and fish.

Though the research system is not commercial scale, there is no evidence that any specific difficulties will arise from scaling up these designs; more likely, scaling the design up will result in bulk savings.

With this setup, we were able to research the relationship between fish feed input, nitrate levels and plant growth. Interestingly, nitrate levels were not linearly correlated with feed ration at 1:1 ratios.  More importantly, only high demand plant varieties (e.g., cucumbers) performed any differently with the nitrate limitations, despite the systems working at the low end of the nutrient scale (nitrate < 50 mg/l). From this it appeared that feed ration proffered to the fish was not as crucial a consideration for plant growth in our system.

Because the ratio between fish and plant biomass is heavily weighted in the plant direction (anywhere from 10:1 to 100:1, depending on the system), matching feed input (or, alternately, fish biomass) to total plant biomass should ultimately be more forgiving on the plant side.

Our work has proven that coldwater aquaponics systems like ours with sturgeon can be successful and have the potential to add a significant revenue stream by taking advantage of “free” nutrients from wastewater in coldwater RAS.

We intend to continue our work to optimize design and operating protocols with regards to fish and plant growth, but also to expand our understanding of these systems by examining, for example, the micro-organisms involved, suspended solids removal strategies, and the effects of temperature and pH on overall productivity.

Combined with our research on white sturgeon as an aquaculture alternative to salmonids, we hope to significantly contribute to the development of coldwater aquaponics locally and globally.

Funding for this research was provided from the BC Ministry of Agriculture Investment Agriculture Foundation, Mitacs Accelerate and VIU.