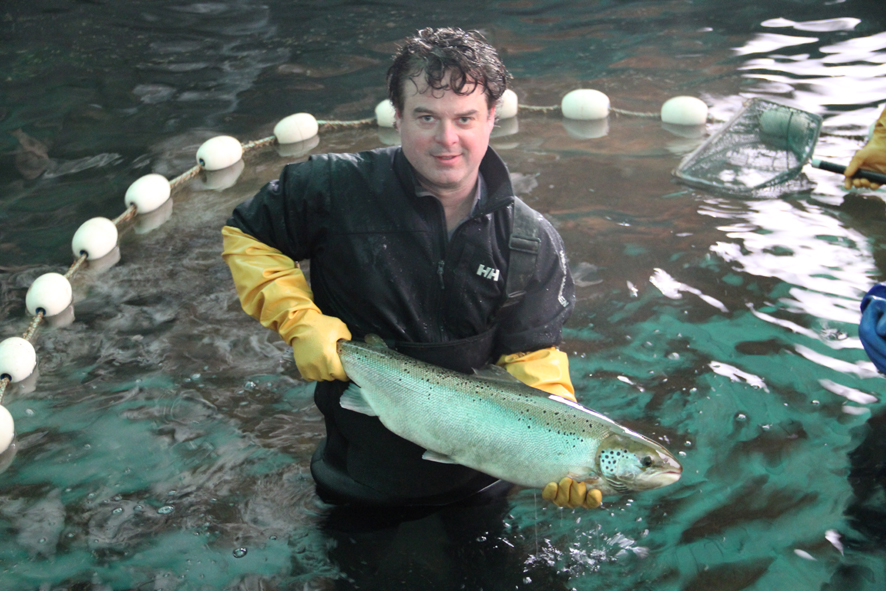 Canaqua Seafoods of West Advocate, Nova Scotia, Canada, has a plan. A couple of years ago, in conjunction with Scotian Halibut of Clarks Harbor, Nova Scotia, they undertook a major expansion of their beach-front site in order to optimize the production of Atlantic halibut (Hippoglossus hippoglossus) – see Aquaculture North America July, 2013. Hitherto production had been in ‘flow-through’ tanks and the construction of re-use systems enabled them to significantly reduce the on-site grow-out time to market and improve the growth of juveniles destined for sale and grow-out in sea cages.

But there were other benefits: besides halibut, Canaqua also grows Atlantic salmon (Salmo salar) and Arctic char (Salvelinus alpinus), and the new facilities enabled them to improve the growing conditions for these species too, significantly increasing the site’s productive capacity.

The site itself is unique, located on what are known locally as ‘dykelands’. When, in the 17th Century, the Acadian settlers first occupied these parts of the Canadian Maritime provinces surrounding the Bay of Fundy, they dyked and drained the marshlands, and created some of the most productive farmland imaginable. The dykelands are still in use, but West Advocate is different yet again. It is underlain by two bands of gravel separated by a thick layer of clay. The uppermost gravel layer is permeated with salt water from the Bay of Fundy, replenished twice a day by the massive Fundy tides; and the lower one is inundated with fresh water from the land. Their depth makes the water absolutely clean, pure and pathogen-free. It also means the water is at more or less constant temperature, year-round. The temperature of both flow-through and re-used water can be maintained at 53.5-57.2oF (12-14°C) using both heat pumps and heat exchangers, thus optimizing fish growth.

Yet with good markets for three different species, Canaqua still had capacity to spare, which is where the idea for an ‘organic salmon product’ line originated. Somewhat more than a year ago, 25,000 70gram salmon fingerlings were set aside for grow-out to meet current standards for ‘organic’ markets.  Some of the fish, harvested 16 months later, weighed in excess of 8.8lbs (4kg), and their growth continues very satisfactorily. An additional 10,000 were added to the program this last fall.

These fish are raised entirely in land-based systems, which clearly offer advantages over growing fish in sea-cages. At no time, from breeding to market, are they exposed to the pathogens and parasites encountered in the wild, nor are they subject to the temperature variations that occur on open-water sites. They cannot escape and mingle (or breed) with wild fish, a point of contention for some.

Notwithstanding these obviously persuasive facts concerning the overall sustainability of land based culture, and the need to encourage it, Canaqua has decided that their appropriate market development target should be ‘Canadian organic’, which will distinguish them from conventionally produced fish from anywhere else.

Asked about meeting national standards for organic production, Brian Blanchard, VP and General Manager of Scotian Halibut, who works closely with Canaqua, said that given the pathogen-free conditions at West Advocate no antibiotics are used, and the technical staff are fully trained in appropriate ‘organic’ fish husbandry and record keeping. The other main requirement is for appropriate feed supply, but certified organic feeds are now in use at Canaqua, and are available on both coasts (Ewos in the east, Taplow out west).

A challenge for the site is to obtain a higher margin as an organic product to ensure profitability for the salmon production, and it is anticipated that with economies of scale and larger production volumes the site will be able to offer a competitive product for this small niche market.

One final point was that given the fish are grown in a combination of flow-through and re-use water systems rather than full recirculation there is very low likelihood of developing off-flavours, so they do not need to be  depurated prior to being marketed.

Canaqua has been in the salmon culture business for more than 40 years, and perhaps knows better than many other growers the optimum conditions for raising fish and running a successful business in a highly competitive market. Understanding the fish, and the technologies used to grow them is paramount.