Achieving a renaissance in aquaculture 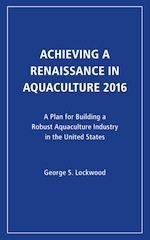 A downloadable pdf of my new book “Achieving a renaissance in aquaculture 2016 – a plan for building a robust aquaculture industry in the United States” is now available by clicking here. A printed edition is planned for early 2016. This book looks at the failure of aquaculture in the United States to become a significant producer of seafood for our large domestic market and analyzes why. It concludes with recommendations for achieving a renaissance.

At the outset of the book, I describe how modern aquaculture has developed over the

past 40 years to be a major supplier of food for the world’s growing populations. Today one out of every two fish eaten is farm-grown. This growth over such a short time has truly been remarkable. Much of this global production involves technologies that were developed in the US.

In the US, our federal government annually spends $100 million on domestic aquaculture research. Over the past decade this has totaled $1 billion. And not included are large amounts spent on cooperative extension and other aquaculture development activities at federal and state levels. In spite of these large expenditures, in 2013 gross sales from 1,296 domestic food-fish farming operations were only $732 million.

Americans eat 4.7 billion pounds of seafood annually. The top 10 seafood consumed include farm-grown shrimp, salmon, tilapia, catfish and pangasius.  More than 90 percent of this seafood is imported and in 2014 US seafood imports were valued at $20.7 billion. This book analyzes why domestic aquaculture has failed to develop to supply our domestic market.

The first reason for this failure is a multi-faceted regulatory environment at all levels of government: local, state and federal. The American public expects government to provide wide-ranging protections in the form of laws and regulations. We want to eat safe food, protect the environment, protect our coastlines from inappropriate development, protect wildlife, provide navigable harbors and waterways, provide safe workplaces, provide retirement security, control medically and socially harmful drugs and chemicals, and many more.

Many protective laws and regulations are in place to control harmful activities that also cover aquaculture and these have substantially restrained domestic aquaculture development. Most foreign producers are not subjected to these extensive regulations. In some cases the regulatory burdens are preemptive and in other cases they are costly time consumers and distractions. As described in the book, one observer over 40 years ago commented “As the phalanx of regulatory agencies grows in number, the opportunity to regulate beyond defensible levels increases.”

The second restraint to the development of aquaculture is that in the eyes of the American public aquaculture has been defined by its critics. Many consumers and government officials have been negatively influenced. Unfortunately, no organization, public or private, in the aquaculture community has been willing or able to effectively and consistently counter their adverse campaigns with science and facts.

Capital starvation is the third major constraint to aquaculture development in the US. Over the past 30 years, capital flows in the American economy have become badly distorted away from small innovative businesses, and institutionalized to be in the hands of “professional” financial managers. Since the Great Recession began in 2008, the situation has become worse with greatly decreased interest by individual investors in new enterprises such as aquaculture.

This adverse situation is not unique to aquaculture, but now inhibits most forms of domestic entrepreneurial innovation. Major macro-economic policies in the US prevent even modest flows of capital into innovative new ventures including aquaculture. Some of these inhibitory policies originated in the 1970s, while others appeared more recently. For the first time in the 35 years that the rate of small business formation has been studied, companies are dying faster than new ones are born.

Small businesses of all kinds, including aquaculture, create most innovation, provide the greatest job growth, and are responsible for the competitive environment that control consumer and wholesale prices.  Most new aquaculture ventures are small innovative businesses. Yet small innovative businesses are the most negatively impacted by the regulatory environment and lack of access to capital.

Each of these three restraints is critical and each must be corrected before we will witness a growth of domestic aquaculture production in the United States. Dealing with only one or two of these constraints would be fruitless in creating an environment for robust growth. All three must be addressed vigorously and simultaneously.

Despite these major constraints, there are some aquaculture successes in some states in the US. On a state by state comparison of annual revenues produced per capita from aquaculture, Maine, Hawaii and Mississippi rank the highest and are far higher than the US average and most other states. In these states there are full time, adequately funded and staffed advocates who shepherd new aquaculture firms through the regulatory gauntlet and work to prevent bad laws while promoting good legislation and rules. In Maine, the average time to obtain necessary permits for an aquaculture operation has been cut from 4½ years to 6 months. Can these successes be replicated in many or most other states? If they can, the US can become a net exporter of farmed seafood.

To address each of the three aquaculture constraints, I recommend that a well-staffed private sector organization be established in Washington, DC for interacting with federal lawmakers, policymakers, and regulators. This new office also would refute bad publicity when it appears. Another recommendation is to form an aquaculture Political Action Committee (PAC) to support the election of members of the US Congress who favor aquaculture development. I also recommend that our large annual aquaculture conference and trade show return to Washington, DC, at least tri-annually.

I further recommend that the private sector, with staff assistance from the federal government, conduct a thorough Domestic Policy Review of all federal activities that interfere with aquaculture development. This review would aim at identifying specific statutes, regulations and policies that must be elimin­­ated or amended by the US Congress and the Executive branch. Finally, I recommend that a White House Conference on Aquaculture be held to identify reforms for stimulating political action.

George Lockwood has been an advisor to federal agen­cies on how domestic policies negatively impact industrial innovation and currently works with the USDA establishing federal rules for organic aquaculture.