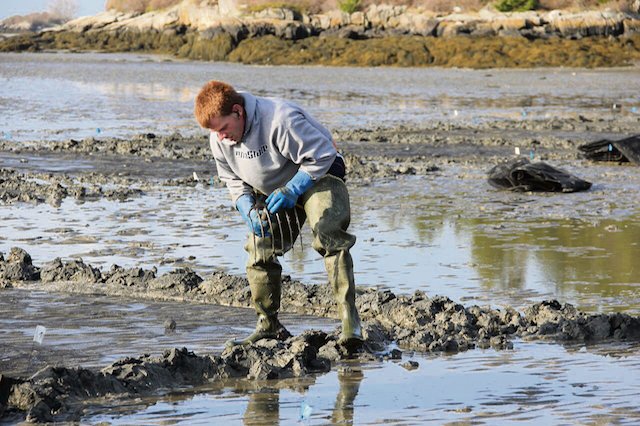 The only soft shell clam farm in Maine uses nets to protect the clams from green crabs that almost decimated the resource in 2012.

Chris Warner, 43, has seen the decline of fisheries on the East Coast.  When he was a teenager growing up in a small fishing village in Maine, he worked on the large boats that fished for groundfish and shrimp.  Now, groundfish are severely regulated and since 2013, Maine closed its shrimping season due to the depletion of the resource.  Climate change, evident in the warmer waters of Casco Bay, has attracted southern species like black sea bass, Atlantic blue crab, and green crabs that have a voracious appetite for soft shell clams.

Warner has been a shellfish harvester since he was 17, digging soft shell clams (Mya arenia) year-round.  He feels it is his responsibly to protect this resource, which brings over $15 million to Maine annually.  When the green crabs (Carcina maenas) invaded in 2012, shellfish harvesters watched the resource disappear in some areas and become sorely depleted in others.  The colder winter in 2014 has stemmed the green crab’s arrival but with the warmer water temperatures year-round, people doubt they have gone away for good.

As part of the conservation work required of clam harvesters, Warner worked with Brian Beal, director of research at the Downeast Institute in Beals, Maine, on projects that experimented with the use of nets in protecting clam flats.  Beal’s research plots in different areas have shown repeatedly that green crabs thrived outside, but not under the nets.

Using that technology, Warner started the only soft shell clam farm in Maine. It is located at Heal’s Eddy in Georgetown, a cove that opens south to Casco Bay.   The farm enjoys the support of Manomet, a non-profit organization with offices in nearby Brunswick and Manomet, Massachusetts, which helps develop scientifically grounded, environmentally sustainable ventures.

Warner connected with Manomet’s president, John Hagan, through Jay Holt, the riparian landowner at Heal’s Eddy.  Hagan, an environmental scientist, immediately appreciated Warner’s expertise as a fisherman and shellfish harvester, and the importance of his dream for soft shell clam farms along the coast.  Manomet agreed to finance nets and seed clams to expand the small project Warner had begun at Heal’s Eddy into a commercial-sized, scientifically documented farm.

In January 2014, immediately after Warner received permission from the town to use Heal’s Eddy as an experimental farm, Warner and Hagan were on the flats installing additional nets.  Once the initial installation was complete, Hagan applied for and won a $288,000, two-year NOAA fisheries Saltonstall-Kennedy grant to finance further expansion.

The Heal’s Eddy farm is now known as the Heal’s Eddy Restoration project. It has 91 plots with 75 14-by-20-foot nets of three different-sized meshes.  Controls — plots without nets — are scattered randomly throughout the farm.  Fifty-two hundred seed clams from the Downeast Institute hatchery are planted beneath each net.  To protect the plots from harvesting, the town granted Warner a conservation easement.

When planting, Warner counts and weighs the seed, then sprinkles them as evenly as possible on the plot.  He covers the plot with a net, and after folding the edges in one foot, he digs a trench around it, folds the edges into the trench, and covers them with the soil he’d dug out.

Dry nets weigh only a few pounds each. Warner can complete a plot in 13 minutes, but he admits it works best when there are two people to stretch the net across the area.  “I’m aiming for this to work for the small farmer,” he says, “but I hope that guys would help each other.  Perhaps a team of two guys for a farm would be ideal.”

The nets, he adds, are placed in such a way that they bow into the wind.  “If not, they’d be ripped right out,” he says. “Each net has floats that allow it to rise a little when the tide comes in, preventing its being buried by sediment.  If a net becomes clogged with mud, it’s like dragging the whole mud flat with you.”

Warner and Hagan have figured the numbers for prospective farmers:  The total cost to set up and plant is $220 per net.  They estimate a first harvest of five to eight bushels of clams would yield about $780, as long as there have not been any major problems.

When presenting a PowerPoint of the project in coastal towns in Maine, Warner says he finds that fishermen have two major problems to overcome.  One is that as wild harvesters, they are accustomed to instant gratification.  They harvest, take the clams to a dealer, and leave with money.  The other is that they are not accustomed to the maintenance a farm requires.  He has seen this in action in various locations where nets have been used by local shellfish conservation commissions, but were lost due to lack of oversight.

The NOAA grant that Hagan of Manomet won for the restoration project stipulates that funds are available to purchase nets and seed clams, and that Warner would make presentations to other towns explaining the project.  He and his principal investors, including Hagan, Beal of Downeast Institute, and Dana Morse of Maine Sea Grant, will select five individuals from five towns to set up farms modeled on the Heal’s Eddy farm.  The new farms will receive funding for nets and seed clams.  Warner will help select an appropriate farm site, supervise the site layout and the farm’s installation, and provide expert advice.

The new farmers must agree to talk with their shellfish conservation group, help lay out and install the farm, monitor and maintain nets, and document progress. The harvest belongs to the farmers.

The conservation easement for Heal’s Eddy granted by Georgetown expired in December, but the clams will be ready for harvest only in the summer. Rather than have other people come in and dig the clams he has so patiently nurtured, Warner has reached an agreement with the town that allows him exclusive rights to 50 plots in return for giving the town 23 plots seeded in 2015 and continuing his scientific research.

Meanwhile, Warner continues to harvest wild shellfish every day. He often takes his children with him and teaches them about the trade. The Heal’s Eddy Restoration project gives Warner an alternative source of soft shell clams and offers his children and the younger generation a potential livelihood option.