The island community of Georgetown, Maine has been struggling since the fisheries they’ve depended on for a living have all but dried up. Pat Burns, a Georgetown resident of over 30 years knew something had to be done. 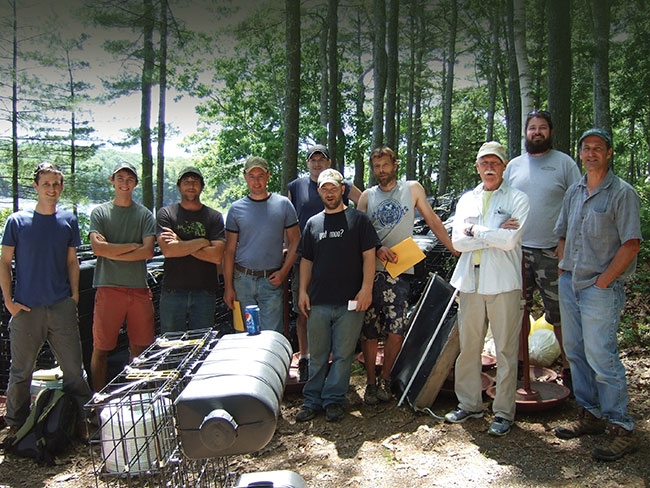 Beneficiaries of ‘character’ loans from Georgetown Aquaculture LLC are with Pat Burns (third from right) and consultant Dana Morse of Maine Sea Grant (far right). Our faith has been well placed

“Our (wild) harvest used to include clams, mussels, finfish, ground fish, lobster, shrimp and even tuna to a certain extent,” says Burns. “Lobster is pretty much the only one left. In 2015, our clam harvest was the lowest in 25 years and that was primarily due to the warming of the gulf. Green crabs have also begun to invade our water sheds and the clam harvest began to suffer dramatically.”

In addition to the environmental issues, the island’s population engaged in fisheries is aging. Although some younger people are going into aquaculture, they are the exception rather than the rule. Burns sees oyster aquaculture as a great way to help maintain and restore the marine economy. But he knew the start-up costs could be prohibitively expensive. Enlisting the help of investor Michael Bonny, Burns used his background in finance to establish Georgetown Aquaculture LLC in 2016. The company aims to kick start oyster farming on the island by offering farmers financing to help them with startup costs.  Within five months, five new oyster farms were born.

“We started the LLC to provide microloans to five farmers initially, but now we’re up to eight farmers. We pledged to fund them for approximately five years at two percent, as low an interest rate as we could provide. In the first five years, they’re only responsible for repaying the two-percent interest rate. At the end of the five years, they will begin to repay the principal plus interest rate. The goal is for them to be completely out of debt at the end of 10 years. By that time, they would be completely independent and owning their own oyster farms,” Burns tells Aquaculture North America (ANA). He hopes that by that time, the farmers would also have the capability to finance any expansion.

Unique funding model
“This form of financing is into perpetuity. These funds will be paid back into the pool by the current farmers and then reloaned again to new farmers who perhaps want to raise seaweed or to raise scallops, or to add to the current crop of oyster farmers,” Burns told the local paper The Times Record.

“We are now in a position, with the repayment of the interest on these loans, to be able to fund future farmers for literally forever, or as long as we continue to have the repayment on those loans,” Burns tells ANA. “In most philanthropy, it’s one off; you really don’t see it continuing and going into the future. Ours is a rather unique funding model.”

Partnerships with a variety of educational institutions around the state have enabled the company to provide farmers with additional support. Dana Morse of Maine Sea Grant has offered workshops to educate farmers to help them avoid beginner mistakes. Most of the farmers are “watermen” – having spent most of their lives on the water, harvesting wild lobster, clams and quahogs – so they have adapted to the industry quickly. However there is a certain amount of technical knowledge required to make any aquaculture operation work.

Farmer Ken McIntyre is one of the beneficiaries. “This is something my wife and I thought about getting into for a really long time, but we could never come up with the money to do it.

“People contributing money into this with a very low interest rate made everything doable. They helped us in every step of the process, from figuring out how many cages we needed to how much seed to buy, to filling out application forms. It really worked out great for us,” he says.

“The marine economy is just dwindling here,” said farmer Chad Campbell, who has become co-manager of Georgetown Aquaculture. “I’ve been a wild shellfish harvester for 20-something years full time and relied on it. Now, you have no choice other than aquaculture if you want to stay in the shellfish business.”

Beneficiaries of ‘character’ loans from Georgetown Aquaculture LLC are with Pat Burns (third from right) and consultant Dana Morse of Maine Sea Grant (far right). Our faith has been well placed

The farmers have impressed Burns. He says he now knows all the loan applicants personally and he believes in them. “You could call these character loans more than anything,” Burns says. “We’re now on our second year of financing and no one has missed a single interest payment to date. Our faith, I think, has been well placed. They have a unique character here. They do not like debt and they believe in a handshake.”

Georgetown Aquaculture sees aquaculture growing on the island. To prepare for this growth, the company has applied to reserve 27 acres of land with the Maine Department of Marine Resources for future farms sites. They were approved for only 14 acres.

“We were disappointed not to get it all,” says Burns, who plans to reapply for additional acreage. “But we’re pleased with the roughly 688,000 square feet we currently have. This gives us room for new farms within the next five to 10 years.”

Burns says they are also in the process of forming a co-op with their farmers and several other independent farmers in the area. Research is also underway on quahog farming, although for now, production is focused on oysters. “One lesson I learned early on was to focus on one effort and succeed in it before venturing into something else. Now that we’re going into our third year, we’d very much like to look at quahogs as our next enterprise sometime this year or next.”

In a short film called The Watermen of Georgetown by Colby College student Annie Lee, Burns acknowledged that “the full measure of the impact (of their efforts) has yet to come.”

“But I think it’s a start, and with any great journey I think it has to start somewhere,” he says. “Long after I have gone my hope is that this aquafarming will have grown to have a very positive effect not only in the financial aspect of this community but in the cultural adhesion and the interrelationships of the individuals who live here.”