Alaska’s farmed oyster industry has grown rapidly over the past 10 years. The state’s 29 permitted operators produced over 1.8 million units in 2017, up 36 percent from the previous year. 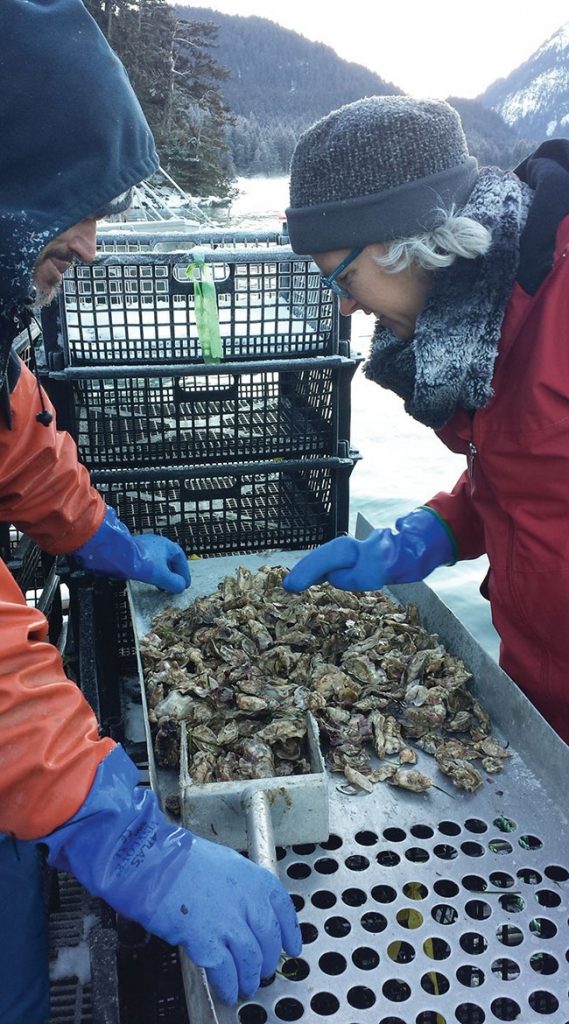 Compared to 10 years prior, growth was 86 percent, data from the Alaska Department of Fish and Game show.  Further pointing to a dynamic industry are the 12 new oyster farm applications the state received over the past two years.

But beneath these developments is a perennial problem for oyster growers: lack of seed supply. Enter OceansAlaska, a non-profit comprised of Alaskan educators, scientists, fishermen and business leaders. The group’s vision is to expand the state’s mariculture industry and wild stock enhancement for oyster, geoducks and kelp, in line with Alaska’s goal to grow its mariculture industry to $100 million in 20 years.  Specifically, OceansAlaska’s goal is to ensure the availability of commercial quantities of seed.

“Seed availability has always been an issue in Alaska,” says hatchery manager Conor Eckholm. “It is the goal of OceansAlaska to solve this problem. There are currently only two hatcheries that supply eyed larvae/seed to the Alaskan market and it’s not always available when growers or hatcheries need it.”

Change in focus
Eckholm says the non-profit was originally envisioned in the 1990s as a Marine Science Center with an upscale aquarium. OceansAlaska’s mission has changed over the years. Their focus now is on running a self-sustaining hatchery and nursery for shellfish and kelp, and running the science center.

Alaska’s fairly young oyster industry still has room to grow. The 12 new oyster farm applications the state received in 2017 and 2018 will need a consistent supply of seed. Two of them alone are projected to require an additional 50-60 million oyster seed per year. Whether there will be enough seed available remains to be seen.

“We are expanding currently and with the help of other hatcheries and nurseries, we intend to meet the goals of the industry,” says Eckholm.

The OceansAlaska Shellfish Hatchery is working on developing best practices and technology to help reach the goal of building capacity in hatcheries to independently produce seed. The non-profit is currently striving towards producing 40 million Pacific oyster seed, two million geoduck seed and enough kelp to result in one million lbs of kelp. They are also considering expanding their operations to a second site south of Ketchikan to help reach production goals.

Eckholm says that the non-profit has experienced learning curve and challenges since changing to their current mission four years ago. “We are still trying to get larger seed supplies for our oyster farmers at the specific times that they request it,” says Eckholm. “We are also currently trying to spawn our own oysters in order to be more self-reliant as an industry, still in collaboration with other hatcheries in Hawaii and Oregon.”