Falling production of oysters in Europe opens up opportunities for oyster growers in the United States. 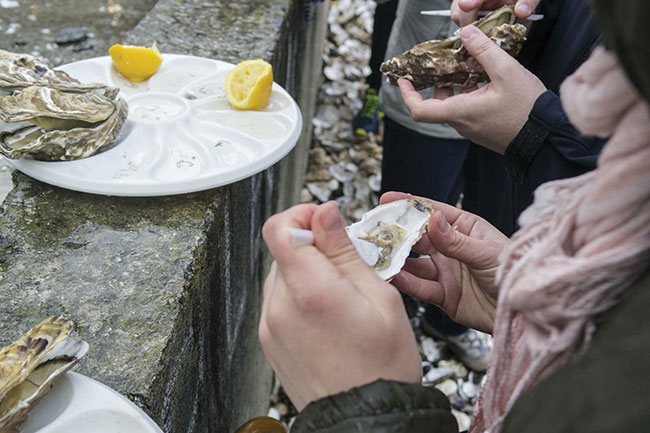 There’s no real preference among European consumers as to farmed versus wild. What’s important is the ‘story’ and people are willing to pay for it

“Hundreds of millions of oysters are missing from the market and we could be part of the solution,” Alexander Wever, Food Export-Northeast’s European In-Market Representative, told attendees at the 2019 Northeast Aquaculture Conference and Exposition (NACE) in January in Boston.

Diseases caused the European market to lose 300-400 million oysters, or roughly 35 percent of local production, said Wever. Production has yet to recover. From the mid -‘80s to mid -2000s European production has been stable at about 130,000 to 140,000 tons. This is equivalent to roughly 1.3 billion oysters. France is EU’s leading oyster-producing member state and it is also the biggest market for oysters.

“European production volume is fully consumed. So there is really no export. There is a very little bit of premium oysters that goes to the Middle East. But normally, what we have, we consume,” Wever said.

The EU is seeking alternative sources outside the region.

Potential lifting of trade ban
The US and the EU are mulling the resumption of shellfish trade between them. The steps to the reopening of both markets was set in motion in March 2018, when both parties reviewed each other’s food safety standards. The US Food and Drug Administration (FDA) expects to announce progress on the resumption of “mutually beneficial trade in this area” this year.

The states of Massachusetts and Washington will be the first to send bivalve molluscan shellfish to the European market once trade resumes. The FDA had worked with the Interstate Shellfish Sanitation Conference and the Pacific Coast and East Coast shellfish associations to identify interested US states that wanted to participate voluntarily. Both states passed on-site audits that verify the robustness of existing food safety programs and safety measures for shellfish.

There’s no real preference among European consumers as to farmed versus wild. What’s important is the ‘story’ and people are willing to pay for it

Dutch connection
On a recent visit to the Netherlands, Wever noted interest in oysters from northeastern US among Dutch seafood importers. A handful of companies concentrated in the same area of the Netherlands that Wever visited conduct roughly 90 percent of the lobster, mussel, and oyster distribution. These Dutch importers are the primary outside suppliers of oysters to the French market, which represents at least 80 percent of the EU market, Wever said. Other major markets for oysters in Europe are Belgium and Germany.

“They know that there is still a ban but they are very interested,” he said. For now, these companies “have two to three airfreight shipments of mainly live lobster every week from Boston.”

Are you ready?
Wever predicted trade with the EU will be a “gradually growing business.” But there is some real potential, he said, “and we should be prepared.” (See page 19 for story ‘Is the export market for you?’)

“If someone wants to export, he has to reserve part of his volume for the export market even if the order is coming every second day,” he said. “The European importer expects that if he places an order, he gets his oysters a few days later,” he advised.

The oyster must have the same shelf life as those produced in Europe. Wever estimated this as adding eight to 10 days to the packaging day.

The exporter must pass food standards to get health certificates.

“These are the things that we have to solve here on our side of the ocean…It will be a step-by-step growing process,” he said.

There is high seasonality in the European market, where consumption peaks during Christmas season and other cold months. Oyster consumption in Europe is still quite traditional – shucked and drizzled with a little lemon or vinaigrette, he said.

In terms of demographics, young consumers are a major target market.  “There are quite a number of young consumers. And they don’t want to eat the same things that their grandparents have been eating,” he observed.

Ninety percent of oysters sold in Europe are farmed, Wever said. “I don’t think there’s real preference among consumers as to farmed versus wild. What’s important is the ‘story’ and people are willing to pay for it.”