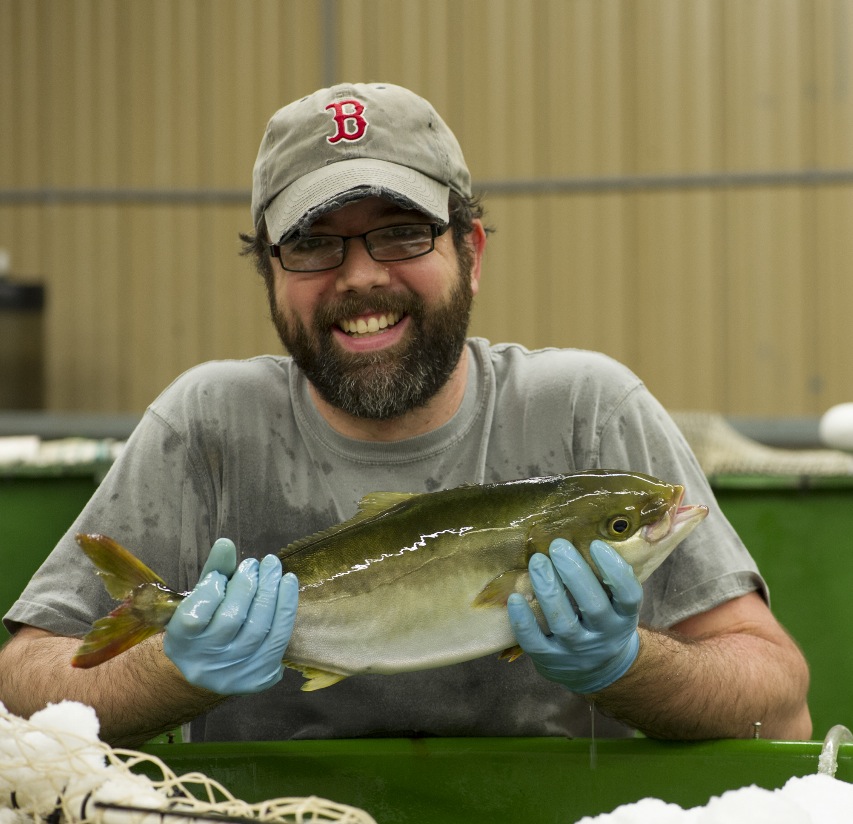 In just three and one-half years, Acadia Harvest Inc (AHI) of Brunswick, Maine, formerly RAS Corp., has reached the final pilot phase of its work on land-based re-circ aquaculture of California yellowtail. The company is laying the groundwork for commercial production of yellowtail, and in future hopes to add black sea bass.

AHI has a purchase option for a 6.7-acre parcel of land at a former Navy base in Corea (town of Gouldsboro), Maine, where approximately 40 acres owned by Eastern Maine Development Corp have been designated and zoned as an aquaculture park. Each of six parcels includes use of a deeded right of way to the ocean for sea-water distribution systems. (Maine Halibut Farms, formerly at University of Maine’s Center for Cooperative Aquaculture (CCAR) in Franklin, and Palom Aquaculture, LLC, based in Connecticut, have also shown interest in other parcels of land at the park).

Preparing for the move

To finance the move, Ed Robinson, Chief Business Officer, who joined AHI shortly after it was formed, says the company needs to raise approximately $7.5 million in loans and equity investments from private investors. To date, their research and development with fish, zero waste and alternative feed, and the purchase option of the parcel in Corea, have been funded by a total of $850,000 from equity sales, commercial loans and several grants from the National Science Foundation, NOAA, Maine Technology Institute and Coastal Enterprises Inc.

Robinson says engineers and builders are conducting preliminary survey work at the Corea site and are evaluating the existing 40,000-square-foot building to help AHI determine the best use for it.

AHI has initiated discussions with the Gouldsboro town management and the US Fish and Wildlife Service regarding the company’s plans and will soon begin applying for necessary permits.

“The salmon company, Palom Aquaculture, has successfully gone through the permitting processes already,” he says. “We’re learning from Palom and are using the contacts they developed.”

The best-case scenario for the move would be the latter part of 2015, with a small crop the first year. By 2017, the company hopes to raise and market up to one million pounds of fish a year. Long-range plans include additional facilities in different US and international locations. At this time, Robinson says although there are several companies raising yellowtail in re-circ facilities in other parts of the world, he does not know of any in the United States.

Taylor (Tap) Pryor, AHI chief scientist, and Chris Heinig, CEO, both marine biologists with many years of aquaculture experience between them, founded the company in 2011 as part of a project to create an Oceanic Center in Harpswell, Maine, an idea that ultimately was turned down by town management.

Pryor says that the company never would have accomplished so much in three years without the expertise they found at CCAR, which supports aquaculture business incubation. AHI has been based at the facility for its R&D with yellowtail and black sea bass alongside other re-circ projects raising halibut and cod, sea worms, urchins and seaweeds.

“The CCAR staff are wonderfully competent in their hatchery work,” says Pryor. “Having their expertise and the CCAR facility can vastly reduce the time needed to move projects forward.”

Robinson adds that AHI management also recognizes the vital support given over the years by Maine Technology Institute, Coastal Enterprises and the National Science Foundation. “Without the advice and financial assistance from these commercially focused groups, the company would not have been able to advance to this point,” he says.

In 2011, Pryor and Heinig worked with CCAR’s director Dr. Nick Brown and staff to raise a crop of 600 black sea bass in a re-circ system that added sea worms to remove some of the waste products. In 2012, AHI added two PhD operations staff of their own, and began additional R&D with California yellowtail, which, like black sea bass, has strong market appeal.

In March of 2013, when the black sea bass were ready to sell, AHI partnered with elementary students in the School of Roots at Herring Gut Learning Center in St. George, Maine. “These great young people are experienced in selling tilapia raised in a re-circ system as part of their school’s aquaponics program,” explains Robinson. AHI returned to partner with the students again in February of 2014 with a batch of California yellowtail. The fish, offered whole, gutted or filleted, sold out locally in two days.

As a final step before commercialization, AHI has initiated a second pilot scale project at CCAR, moving approximately 7,000 yellowtail fingerlings spawned from broodstock in the CCAR hatchery to growout tanks. These fish, the first of two sequential batches, will provide information about production procedures and marketing on a larger scale. Originally, Robinson says, they had planned to import yellowtail eggs and completed a long regulatory process to make it possible.

“We were stymied by the recent long cold winter,” he says. “The airlines couldn’t guarantee safe delivery – the eggs might have been left out on the tarmac, and we’d have received frozen blocks instead.”

While AHI has continued to pursue their original mission to establish zero waste systems by using worms, algae and oysters, Robinson says their primary focus at this time is on refining the fish husbandry to determine optimum growth conditions for the move into commercialization.

At CCAR, the company will continue R&D work with zero waste systems, which they hope in the future to incorporate into operations at the commercial production facility. They will also continue long-term R&D at CCAR to develop feed formulations tailored to yellowtail and their nutritional requirements. Meanwhile, they will use commercial feed and the type of high-tech waste removal biofilters and drum filters that are used at CCAR. They do not plan to build a hatchery at the Corea site, and instead, will rely on CCAR and other commercial hatcheries for juvenile fish.

“We’re very pleased,” says Pryor, who has started several different on-land aquaculture projects in his 83 years. “But we’re taking baby steps, and each step along the way has been so informative. We think we know it all, and then we learn something new.”

Several batches of the black sea bass and yellowtail from AHI’S Phase I Pilot project at CCAR were sold to distributors on both East and West Coast.

“We were fascinated to learn from distributors that most of their customers were almost dismissive of wild yellowtail,” says Robinson. “At first, we thought ‘How could this be?’ Apparently the issue is that wild yellowtail are quite variable in color, taste and fat content, depending on what they have found to eat. Because the supply is highly variable, the price is half or less of farmed fish.

“A lot of people on the East Coast don’t see yellowtail at all,” he adds, “or they can only get it frozen from Japan. Whole unprocessed aquaculture yellowtail are popular with sushi and sashimi chefs.”

They will focus on smaller fish, growing them throughout the year to meet the challenge of providing a consistent supply to their distributors. “We don’t want to be relegated solely to the special of the week category,” says Robinson. “If we’re put on the regular menu, we’re guaranteed a place at the table as long as the contract runs.”