Maine ticks all the boxes as an ideal incubator of aquaculture enterprises: it has a culture around marine food production, a working waterfront, and a world-renowned reputation for premium quality seafood. Why is it just a bit player in the aquaculture industry is perhaps understandable: its lobster fishery contributes $1 billion to the state’s economy annually and generates 4,000 jobs. 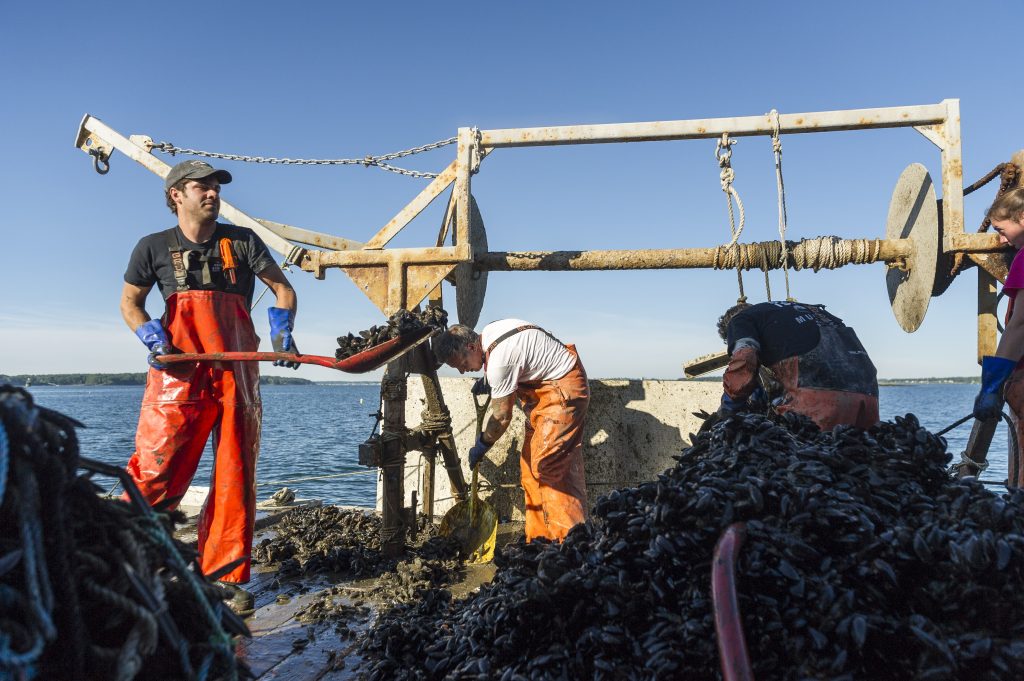 By comparison, aquaculture (includes farmed salmon, shellfish and seaweed) has a direct economic impact of $73.4 million in output, 571 in employment, and $35.7 million in labor income, according to a January 2017 Aquaculture Economic Impact Report from the University of Maine.

Anecdotal evidence suggests warmer temperatures to be the major culprit in the decline of fisheries in the state. Lobster landings in 2017 have fallen by roughly 20 percent to $434 million from the record $540 million in 2016. Maine’s shrimp fishery has been closed for several years also because of warming water temperatures. It is still uncertain whether regulators will open it in 2019.

“We are certainly seeing some environmental changes. People are concerned about what the future’s going to hold. We’ve seen water temperatures that are higher than normal but we don’t know whether that’s a short-term or long-term trend so were tracking that very closely,” Sebastian Belle, executive director of the Maine Aquaculture Association, tells Aquaculture North America (ANA).

Tighter limits on herring fishery, the number one bait to catch lobster, is expected to have further dramatic impact on the lobster industry.

Maine-based Barton Seaver, renowned chef, author and advocate for sustainable seafood, is worried the state’s lobster industry might cease to exist. “Our lobster industry is booming but it is facing unprecedented crisis due to the bait shortage,” he told participants at the Seafood West Summit in Campbell River, British Columbia in September.

Ironically, what’s triggering the decline of fisheries in the state is also inducing the expansion of its aquaculture industry.

“Certainly there’s a recognition that if working waterfront communities are going to survive they have to use some new tools to diversify their economic base and aquaculture is one of those. There’s interest in those coastal communities in aquaculture because it is a way for those communities to maintain their maritime heritage,” says Belle.

He recalled how Maine Aquaculture Association’s membership was largely comprised of biologists and graduate students when it was founded 40 years ago. “Now I could say that roughly 70 percent of our members, or maybe a little more, are either commercial fishermen, or sons and daughters of commercial fishermen who are using aquaculture to diversify their economic base,” he says.

Seaver, the chef, believes in sustainably farmed seafood as a means to uplift Maine neighborhoods. “Maine is the second-hardest-hit state in the opiate epidemic in America. We have around 35 overdoses a day. We have paper mills that are shuttered and a logging industry that’s failing. Our lobster industry is facing unprecedented challenges. But when I look at Maine I also see the longest coastline in America other than Alaska. I see an incredible opportunity — it is the marine central valley. It is as fertile of a water area as California is to area of land. So as I look at the economic shortcomings of communities, of my neighbors, I look at seafood as a means to uplift them,” he says.

Matt Moretti, whose company Bangs Island Mussels grows shellfish in rafts floating in the waters of the Casco Bay, in the Gulf of Maine, told ANA in an earlier interview that “aquaculture is certainly a way of supporting economic improvement in less affluent communities on the coast.”

“We’ve seen very good growth in the aquaculture sector,” says Belle. “We’ve seen a lot of new small farms many of them are started by sons and daughters of commercial fishermen, so we’re seeing the blending of the commercial fisheries and the aquaculture sector which has been very good for coastal communities. We expect to see that trend and that level of growth in the next couple of years.”

Farmed salmon
Contributing to that growth is Cooke Aquaculture, the state’s only farmed salmon producer.

The company has made significant investments in Maine on the operational side, as well as in technology and marketing in recent years, up to and including 2018, says Richardson. Among these investments was spending $2-million on equipment and machinery upgrades for Cooke’s value-added processing plant in Machiasport.

“One of our top priorities is to increase our production in the state, which we hope to achieve by expanding our hatchery, sea site, and processing capacity. We currently hold 25 saltwater marine farm leases and have one new site in the approval process for Beal’s Island,” he says.

Atlantic salmon farming in Maine has been around since the 1970s. Over 25 million pounds of farmed salmon was harvested in 2010, or 11.3 million kilos, with a value of $74 million. The Maine Department of Marine Resources explained the 10-year-old data: State laws require three or more entities reporting to release harvest numbers publicly; since Cooke is the only entity reporting since their consolidation into a single company in 2011, public reporting has not been required.

“We have 25 ocean sites and we are getting new ones over the next couple years,” says Belle. “We are getting some growth in our traditional salmon farming community but we don’t have the kinds of sites available to us that other parts of the world might have.”

The arrival of two massive land-based aquaculture projects in the state – Nordic Aquafarms and Whole Oceans – has certainly “hyped” Maine’s profile as farmed salmon producer, says Belle. “But it’s too early to know how these RAS projects will impact the US’ role as a farmed salmon producer. We have to wait and see how successful the land-based operations will be. Their success will determine whether or not we will become a bigger producer than we are now.”

“So we have a lot of public education to do to try to explain to people what we do and how, and why, in particular, the environment is so important to us. We are concerned that coastal residential development in particular has the potential to hurt the environment and we don’t want that to happen,” says Belle. Part of that goal is to help new farmers help adhere to the best management practices, he adds.

It is through public education and constant vigilance about environmental protection and sustainability that Maine will maintain its reputation as producer of quality seafood. “The Maine brand is viewed very positively. For our aquaculture products in the state, we typically get paid 10 to 20 percent higher prices than our competitors,” says Belle. And that is something he certainly wants to remain unchanged.