The politics of farmed fish

When the newly elected chief of the Wei Wai Kum First Nation in Campbell River, British Columbia spoke at a salmon farmers summit in September, he admitted he “struggled” with his decision to attend the event. The chief, Chris Roberts, withheld the “First Nations Blessing” that was to kick off the program that crisp autumn morning. 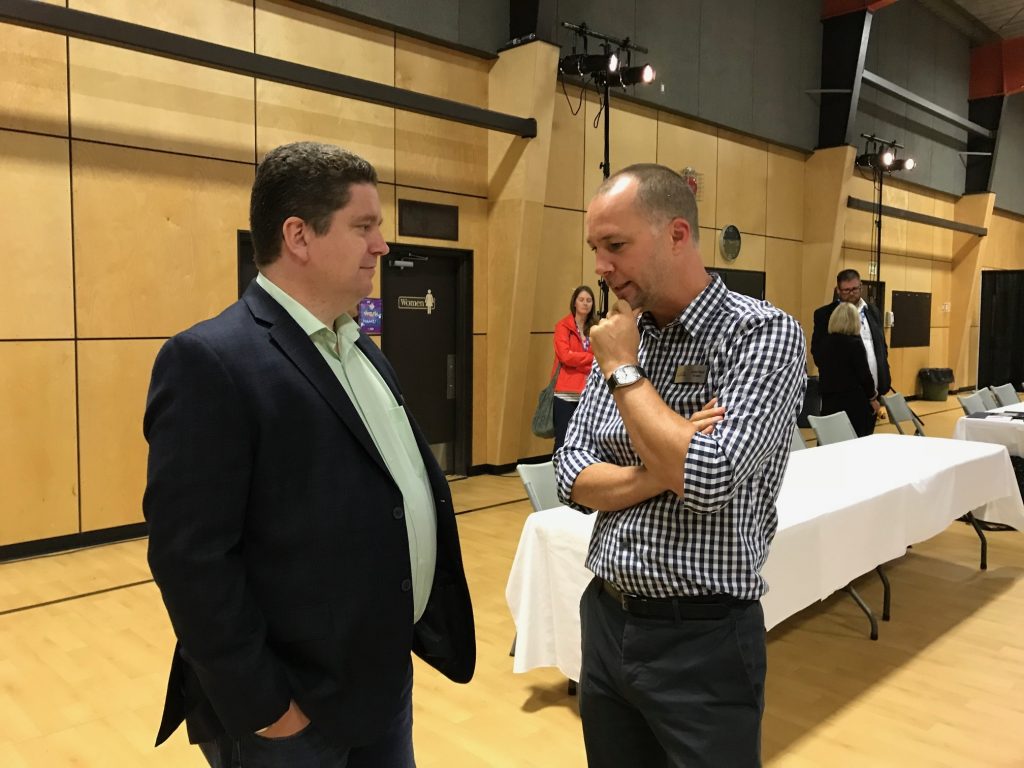 “I think that before receiving a type of blessing for the industry from my First Nation, there’s a lot of work to be done as far as engagement. Dialogue is required and that’s going to happen under my leadership with my council,” said Roberts, who was elected by his people as Chief Councillor in April.

“[Salmon farming] is a highly politically contentious issue in my community and being an elected community leader, I want to assure my people that I’ve got their best interest,” he said. He also assured the industry that he has an open mind and is willing to dialogue.

Campbell River accounts for almost one quarter of aquaculture employment in the province. Three of the world’s leading aquaculture companies – Cermaq, Marine Harvest and Grieg Seafood – have their North American head offices in this town. Roberts’ non-commitment is a telling moment in the battle the farmed salmon industry now faces in the region. If salmon farming can’t secure social license in communities that seem to clearly benefit from the industry, one can just imagine how much tougher it will be to win over communities far removed from it.

Such is the milieu that John Paul Fraser found himself in when he took over the role of executive director of the BC Salmon Farmers Association (BCSFA) in August. But having spent years as a communicator working in the federal government, the native British Columbian wasn’t surprised. He knew that Atlantic salmon farming, like so many other industries on the coast, has broad economic and political implications. They can spark fiery rhetoric on both sides of an issue.

“In the late 80s working with the Minister of Fisheries as his press secretary, I saw firsthand at that point really how supercharged West Coast fish politics is,” Fraser said at the same summit.

Just days earlier, two motions were presented at the convention of the Union of BC Municipalities (UBCM) held in Whistler BC: one from the City of Victoria calling on the province to mandate salmon farming to move on land; another from Campbell River calling for the province to ensure a science and evidence-based approach when deciding on fisheries management and environment protection. The second resolution passed. It’s a victory, but Fraser is likely to see many more such duels in the future.

“It should come as no surprise but elected governments tend to do things that they think are popular and they shy away from things they think are not. And I know, because I’ve been there. I’ve been on the inside. Doing this work to get our message and our commitment clear is critical to building up our social licence and also critical to building a path for good policy decisions,” Fraser told the audience.

It is unfortunate, he acknowledged, that science is often ignored by anti-salmon-farm activists, whom he called “opinion opponents,” borrowing a phrase from Marine Harvest chairman Ole-Eirik Leroy.

“If you spend significant time with the research, literature, and the science and you look at the progress and the processes that are in place right now on the coast, here in British Columbia, you might actually conclude that we’re doing it really well. In fact, we’re doing it so well that people come to us, and look at us, and learn from us,” Fraser told Aquaculture North America (ANA) in an interview.

But those whose minds are made up often ignore such data. It is a frustration shared by Mark Lane, executive director of the Newfoundland Aquaculture Industry Association: “Twelve-percent (of Newfoundlanders) either disagree or strongly disagree with the industry. They’re enabled by some media, unfortunately, who do not understand what we do or ignore the truth. The 12 percent will never change their mind about aquaculture no matter how much time we spend on educating them,” Lane told ANA.

The controversial salmon escape incident at a salmon farm in Washington State over a year ago and the subsequent banning of net pen aquaculture in the state has elevated the toxic rhetoric. Emotions are easy to inflame when pictures of salmon with sea lice are published, and republished. Feelings also get roused when newspapers trumpet “new proof” that fish farm escapees interbreed with wild salmon, no matter if the study being quoted is at least two years old and has been published by the same news outlet before.

“We need to have more dialogue with the public because there’s lots of work to do in terms of earning public trust,” Fraser said. “There’s no question the public and their concerns, rightful concerns, about wild salmon are important, and that’s good, and the industry is very aware of that.”

This past winter, BCSFA conducted a series of dialogues where community members voiced their support, their concerns and vision for the industry. Through the exercise, the association discovered that the communities’ top three values or concerns were ecological sustainability and ocean stewardship; Science and academic research; and way of life continuity for future generations.

The dialogues also revealed that people recognize that the salmon aquaculture industry offers opportunities for advancing the cause of wild salmon. “We discovered that as we asked people if they will be part of our ‘salmon protectors’ program they were more than willing, but this is not what the public is hearing,” said Stewart Muir of Headwaters Strategy Group, the consultancy that helped BCSFA conduct the dialogues. Results of those conversations are captured in the newly launched website, www.sharingsalmon.com.

Despite the challenges, Fraser thinks he arrived at an exciting time. Aquaculture is now the fastest growing food-production sector, and British Columbia is an industry leader.

He noted that progress in salmon farming is not just confined among producers themselves, but the entire industry ecosystem. “Our technology providers are looking at and thinking about new and different kinds of technology, of different kinds of feeds. There’s energy and a cluster and expertise that’s growing here in BC that actually makes us world-leading salmon producers in the ocean environment, where we are fully in step with the law. We’re completely transparent, we’re subjected to the highest local regulations than pretty much any sector in the agrifood economy, and receiving third party-certification,” Fraser pointed out.

“I think that there’s a real opportunity for us to do more and do better at talking and connecting with the communities, the province, and really all of Canada about who we are and what matters. I also think there’s an opportunity for us to talk about our commitment to wild salmon, about co-existence between farmed and wild. It’s not a choice, it’s not an either/or; they can complement each other.”

He knew from the start his priority when he was named to this role. “I pledged to speak collaboration and to reduce the conflict. This industry is too important to allow people to take shots at it with information that is completely inaccurate. There’s too many jobs, too many opportunities at stake, not least of which are First Nations, some of whom have taken very important leadership roles in this industry as true partners and leaders,” he says. “Let’s find a way to collaborate to grow and support this important industry.”