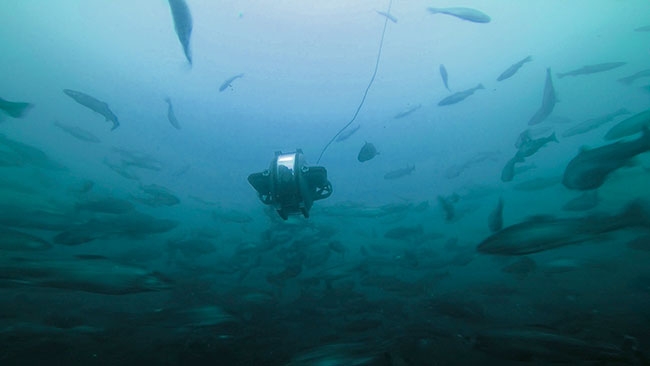 Farmed salmon fits the profile of the protein source per the UN SDG 2, Zero Hunger.

Among fish, farmed salmon has the highest protein content. Its carbon footprint of 9.8 percent, edible yield of 68 percent, and its feed conversion ratio of 1.15 is the lowest compared to other proteins.

“When we look at the farmed animals that we currently eat, we are definitely able to consume more of the fish and produce it in much less space,” said Rachel Major, business development representative at Deep Trekker.

Major cited statistics during her presentation at Aquaculture Canada 2018, titled Aquaculture for global health: Sustaining the United Nations Sustainable Development Goals with remotely operated vehicles. The annual production of 3.2 million tons of farmed salmon lags far behind other proteins, with beef production at 60 million tons per year, chicken at 107.1 million tons, and pork at 118.3 million tons.

UN SDG 14 Life Below Water focuses on the conservation of the oceans, seas and marine resources. However, at times, it seems to be incongruous with fish farming practices, said Major. This is where technology comes in.

Aquaculture has been called out for the perceived negative impact to the environment, particularly in terms of water pollution and fish escapes. Remotely operated vehicles (ROVs) are an option that could minimize fish farming’s impact on the environment.

“Now more than ever before, underwater robots are making it possible to protect the environment, giving fish farmers eyes under the waves and allowing them to monitor water conditions effectively and in an environmentally savvy way,” Shannon Regan, communications specialist at Deep Trekker, told Aquaculture North America (ANA).

Visual monitoring of the fish feeding behaviour allows farmers to reduce overfeeding and waste. From what they see on the sea floor, they also get to make informed decisions on fallowing or recycling the pen to protect the ocean environment, Major said.

Feed represents about half of the operational cost for the farmers so being able conserve and minimize wastage of the feed is crucial.

Attachments to the DTG2 ROV, their most popular product, such as the laser scaler and mort retrieval system are used to monitor and perform preventative maintenance and ensure the integrity and cleanliness of the farm environment. The cost of a diver to perform similar tasks is two to three times more than a single purchase of a DTG2 ROV, Regan said.

“The difference between running a sustainable operation and one that can poses risks to the surrounding environment depends on how often fish farms are inspected. It is recommended that farms are inspected on a daily basis,” she said.