Archiving for the future 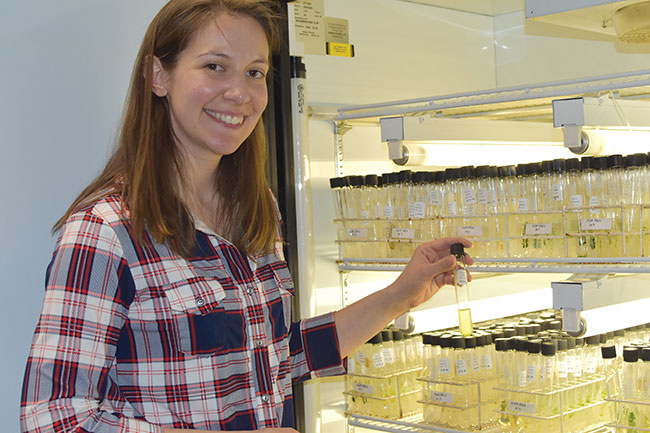 Algologist Lisa Guy is the curator of the Microalgal Culture Collection at Milford Laboratory in Connecticut.

The woman, seated in front of the biosafety cabinet, reaches under the protective window and meticulously pipettes a green liquid containing Tetraselmis chui into a 10-milliliter vial. She moves with the precision of a scientist, yet – dressed in jeans and a plaid flannel shirt – looks more like a shellfish farmer.

Striking that balance in many ways is what her job calls for as the curator of the Microalgal Culture Collection of the Milford Laboratory, based in Milford, Connecticut.

Lisa Guy is approaching her one-year anniversary (in September) at the Connecticut lab, which is part of Northeast Fisheries Science, the research arm of NOAA Fisheries in that region of the U.S. As algologist of this unique and historic archive, she maintains over 200 strains of microalgal cultures that are available to academic researchers and commercial shellfish hatcheries – at no cost.

Says her boss and longtime director of the lab, Dr. Gary Wikfors, “it’s a national and international resource.”

In addition to offering “starter cultures,” shipped free in small vials, the lab provides technical assistance. As Wikfors sees it, it’s a combination of the Burpee’s Seed Catalog of microalgae and an extension service for hatchery operators.

Guy, who holds degrees in biology and environmental science, has a foot in each of those worlds. She spent nine years at Horn Point Oyster Hatchery, which produces one billion oyster spat annually. Starting as an intern, she not only learned all aspects of oyster culture from broodstock management to outplanting but also gained experience on a working oyster farm. She advanced to become a faculty research assistant and served for four years as the head algologist.

Guy moved into the role of Milford’s algal curator after it was vacant for more than two years following the retirement of its longtime head. “We think it is a big deal for the shellfish and aquaculture communities to know that the lab has recommitted to maintaining this important algae culture and continuing to provide this extension service,” says Kristen Jabanoski, science communications specialist at Milford Laboratory.

Life in the Lab

Guy nurtures the algal archive in 24/7 climate-controlled incubators and a “light-room” of flasks and test tubes. She maintains copies of each of the 200-plus strains in three different media (filtered seawater, artificial seawater fortified with vitamins and minerals, and agar).

This redundancy is important as a hedge against equipment failures and unexpected water-quality variations.

Much of Guy’s time is spent transferring the cultures to the different media and keeping them growing. “It must be a bear to maintain,” says Taras Pleskun, who is the hatchery manager responsible for algae at Mystic Oysters in Connecticut. “It’s a back-up bank of pure strains.”

Pleskun says three or four strains are the workhorses in his hatchery, but he may cultivate up to eight for special purposes.

A tendency exists to keep on using the same algae, according to Guy. People say, “I learned from somebody. They used it, so I always use it.” Some popular strains are T-Iso Tisochrysis lutea (T-Iso), Isochrysis sp. (C-Iso), Tetraselmis chui (Ply-429), Chaetoceros calcitrans (Chaet cal), Pavlova lutheri (Mono), and Nannochloris sp. or Nannochloropsis sp. (Nanno).

“Just don’t be afraid to try something new,” she adds. “Water quality really is a factor and can vary from year to year, even in a lab.” Trial-and-error is an important principle at a hatchery;.

So much affects what happens in the hatchery, from fundamental biology to feeding to operational elements. Says Maine oyster farmer, Bill Mook, “I want to make it a predictable process.”

One way he strives for that is by consulting with Milford, “where you can combine their knowledge of biology with your own observations.”

Lori Mayer, a marine biologist who manages the hatchery for New Jersey-based Clam Daddy’s, which she owns with her husband, says she turns to Milford with questions like: Are growth rates being affected by the nutrients I’m using? What if we go from fluorescent to LED lighting?

“The Milford Lab has been invaluable to our hatchery,” she says. “We have been using their starter cultures successfully for 14 years to grow algae to feed our larval and post- set clams.”

Lisa Guy enjoys trouble-shooting by phone. “Some of my best conversations have been in sharing experiences, bonding, even when things go wrong.  The call ends with them thinking, ‘It’s not just me.’”

When people call Guy, they are also tapping into the knowledge at the lab overall. Guy attends monthly staff meetings with some 25 researchers and post-doc students investigating queries like shellfish responses to ocean acidification and fish interaction with aquaculture gear.

But it isn’t always that formal, since the director fosters collaboration with coffee breaks every morning at 10:30. Someone scoops espresso into the coffee press; another passes scones from a favorite bakery. One day a local grower joined them and was treated to a lively session of expert troubleshooting.

In the past, the team has conducted the Milford Microalgal Culture Workshop for researchers and hatchery managers who want to learn how to grow microalgae to feed their shellfish stock.

Every year Milford Laboratory also presents research results at either the Milford Aquaculture Seminar or the Northeast Aquaculture Conference and Exhibition.

Despite these efforts, Jabanoski believes that in many ways the lab is “still a hidden gem.” Guy adds, “There are so many new players in aquaculture who are asking ‘Where do I get my algae?’”

The lab began in 1919 with one federal researcher and the support of local oyster businesses, according to NOAA. But it was later, with the hiring of Victor Loosanoff, who served as director from 1935 to 1962, that the lab produced foundational research on shellfish biology and culture.

A native Russian, who learned English while working as a lumberman and commercial fisherman, Loosanoff earned his Ph.D. in zoology at Yale. Under his direction, the lab developed a methodology to spawn bivalves nearly year-round and rear them through the embryonic, larval, and adult stages. Researchers cultured algae to nourish the shellfish during each life stage – which became the Milford Lab Culture Collection. It dates back to the 1950s.

“At the time, no one in the world could consistently maintain and develop substantial numbers of bivalve mollusk eggs to a large enough size to be planted as seed,” according to Maille Lyons in an article for National Shellfisheries Association.

Today, the scientific resources of the Milford Lab include not only the microalgal culture collection but also a shellfish hatchery and tank farm, a flow cytometry facility, and a 49-foot research vessel, the R/V Victor Loosanoff.

And Milford’s work is likely to be increasingly important in the future as the climate changes, and hatcheries are needed to protect shellfish during vulnerable stages.  Says Mook, “The availability of all of the microalgal strains and the intellectual power [at Milford] will be more and more essential to keeping people with shellfish on their plates.”