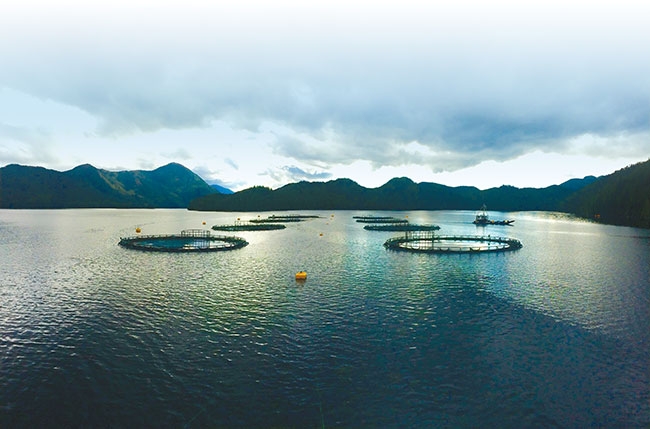 Engineering the future of cage culture Innovations in cage systems are spawning hope for a sustainable future in net pen farming.

Innovations in cage systems are spawning hope for a sustainable future in net pen farming. From core cage designs that combat threatening weather to ancillary systems that fight parasites and predators, both veteran European manufacturers and inspired Canadian start-ups are tackling the challenges.

But, as committed as the industry is to solve its most intractable problems, its approach has been one that David Kiemele, managing director of Cermaq Canada, characterizes as “measured and responsible.” Aquaculture is not a business rabid for “disruptive technologies.”  The stakes are too high.

Instead, Kiemele is more inclined to talk about “precision aquaculture,” where innovations in technology and engineering move purposefully from observation and interpretation to decisions and actions.

A three-year-old company in British Columbia is a good example. Started by a marine engineer, Poseidon Ocean Systems has designed a new cage system called the Trident Hybrid Steel Cage System that combines the benefits of steel cage farming with the enhanced stability of rounded continuous pipe traditionally used in circular pens.

“So many of its features are incremental that we consider the system an evolution in cage system design, not a revolution,” says Poseidon CEO Matt Clarke. “But, all together, this is a big step forward.”

Gael Force Group’s newest mooring system sounds similar: step-by-step improvements to yield new levels of performance. The system, branded SeaQureMoor, was introduced in Scotland in 2016 and has just recently been installed at a farm in Newfoundland and Labrador—a first in Canada. Gael Force established a new operation in Grand Falls-Windsor in April this year.

Engineers of mooring systems traditionally have depended on metal shackles to connect nodes to ropes, according to an FAO technical paper from 2015. But Gael Force did something new: it replaced these shackles with fiber ropes attached directly to the circular metal node below the mooring buoy. That reduces the wear and tear from metal-on-metal friction.

Gael Force also developed a new rope with a smaller diameter to further reduce abrasion. The lighter-weight line does not compromise on strength, the company says. And their anchor, with its twin shank and twin point fluke design, rather than a conventional spade shape, offers twice the holding power.

Jamie Young, Gael Force Group’s sales director, echoes the responsibility the industry feels, when he recalls the failure of a pen in 2017 that led to the Atlantic salmon farming ban in Washington State.  “Companies recognize the importance of containment,” Young says.  “Situations like Seattle make the industry realize if someone gets it wrong, the impact is not on the farm alone—the implications are potentially massive.”

Young also emphasizes that the adoption of innovation is not a static act.  The level of security a mooring provides starts with initial system design, of course, but is also affected by what happens after that.  When a farm opts for deeper nets, adds a lice barrier, or expands its pen sizes, that can challenge the mooring.  And so can biofouling.  “Any of these factors can potentially lead to component damage,” he says.

Fish escapes
“Large-scale escape events have not occurred in recent years in BC,” according to the most recent Seafood Watch report from the Monterey Bay Aquarium. “Nonetheless, they continue to occur globally from similar production systems, and the potential remains for escapes due to human error or bad weather.”

One way to reduce human error is to mechanize certain daily operations at the farm site.

In 2015, Aqualine was the first company to introduce a winch system to raise and lower nets.  It eliminated the need for a boat, crane, and chains to do so.

Winches are placed around the pen and operated from a single power unit, often part of the digital control system on a nearby barge.  Because the winches are all synchronized, net handling during smolt delivery or harvesting becomes less risky.

With the winch system, the net movement is also steadier and the sound is reduced to a low buzz. Says Aqualine’s CTO Martin Soreide, “It is less stressful for the fish.  That is the important thing.”

Aqualine has won a number of innovation awards in Norway for its Midgard System and has sold over 3,000 winch systems worldwide, according to Soreide.  (None of the cages Aqualine has installed in Canada to date has included the winch system.)

Canadian efforts to adopt new containment systems and successfully maintain them undoubtedly have paid off.  “We can run net pens in a way that keep fish in the pens where they are supposed to be,” says Jeremy Dunn, Director of Community Relations and Public Affairs at Mowi Canada West.

But there’s no complacency in his attitude. “Based on polls and just talking to people, the key concern about salmon farming in British Columbia is for the well-being of wild salmon,” he continues. “Anything that is or is perceived to be a threat to wild salmon is a risk. So, we have implemented innovations that have significantly reduced escapes.”

Many of these have to do with nets: nets made of advanced materials, dual net systems to keep fish in and predators out, HD camera systems not only to monitor fish during production but also net conditions, and ROV technology for further surveillance.

A net manufacturer increasing its presence in Canada is Badinotti.  The Milan-based operation, which has been making nets since 1910, recently announced the addition of a general manager, Simon Proctor, in Campbell River, BC, where the company is moving to a new location.

The biggest change in nets for salmon farming during the last 10 years, according to Ingolf Goetz, Badinotti’s sales manager for the US and Canada, is the switch from copper-coated nylon nets to those made of high-density polyethylene (HDPE).  The benefit of HDPE is there is no copper coating agent, which is a potential source of metal accumulation in cultured fish.

But the HDPE nets are heavier and bulkier—and require washing.  Badinotti has made a “sizable investment” to provide washing while nets are in the water.  (They own eight boats, according to Goetz.)

An advance that Badinotti is excited about is a new net that mixes textile fibers with steel or copper.  Called Combinet, it has been designed to reduce biofouling and offer strength.  According to Goetz, it has recently been installed in the Gulf of California at the Kampachi Company farm in Mexico—where sharks are predators.  The company is monitoring performance and, with good results, expects adoption of this innovation to move beyond Mexico.

Engineering the future of cage culture

Solving the scourge of sea lice
For years, the challenge of sea lice in salmon farms was pretty much under control, until evidence showed that emamectin benzoate, marketed by Merck Animal Health as SLICE, was becoming less effective against the parasite.  In the last decade, the industry has responded with increased R&D.

In April, Mowi Canada West launched Aqua Tromoy, the largest and most technologically advanced vessel equipped with an on-board water treatment process for sea lice.  The process involves lifting salmon aboard and immersing them in freshwater to remove sea lice and other parasites.  Managing director Dr Diane Morrison calls it “a game-changer for our business.” (See page XX for insight into Mowi Canada West’s sea lice arsenal.)

Salmon farmers are also combating sea lice through the use of tarpaulins.  For example, Botngaard, a Norwegian company founded in 2009, creates custom tarps for aquaculture, including lice skirts and both delousing and disinfectant tarps.

But when a farmer lowers tarps to wall off the cages for protection from sea lice, the oxygen available to the salmon may drop because water is not flowing through to deliver it.  If this happens, fish appetites decrease…and so does growth.

A new way to ensure salmon get the oxygen levels they need is through a nanobubble generator.  This emerging technology is based on the discovery of nanobubbles, which are so tiny that 8,000 of them equal the width of a human hair.

Unlike microbubbles, which rise and burst on the surface, nanobubbles remain stable in water for prolonged periods. They can be injected at any level and provide oxygenation at all depths. “They hang where the fish live,” says Cermaq’s Kiemele.  That’s their beauty.

This very efficient delivery, part of “precision aquaculture” that Kiemele likes to talk about, can target particular problems at particular times on particular sites.

Fish farmers seeking such aeration systems should do their homework, though, to ensure they get what they want.

“We spent a lot of time and resources in the early days qualifying it with academic studies and field trials with our clients,” says Tom Richardson, vice president of Technology.  For quality control, Gaia later invested in its own Malvern Particle Analyzer to conduct testing of their UFB (Ultra-Fine Bubbles) Generators on an ongoing basis.

Cermaq also taps nanobubble technology to manage phytoplankton blooms, by installing tubes around the perimeter of the cages, says Kiemele.  These harmful blooms, such as the one that suffocated about eight million farmed salmon in northern Norway in late May, are predicted to increase worldwide as waters continue to warm.

Closed cage systems are also on the Canadian horizon to manage multiple challenges that the industry faces.

Last December, Cermaq announced that its trial with a closed cage for post-smolt in northern Norway was a success. “Here the fish are thriving, and have grown better than the fish in the cages around the area, mortality is minimal, and lice are no problem,” said Kejell Hansen, the project coordinator.  Technology produces waterflow into the cage from deep below, thus ensuring the requisite level of oxygen.  The tarp wall is made of strong and flexible composite, according to Cermaq, and is surrounded by a traditional net.

In the Norway trial, smolts are grown to 2 kilograms, then transferred to open cages. David Kiemele hopes to move another step forward with the system in 2020, launching it in Canada and growing them all the way to harvest size.

It is not surprising that the name Cermaq chose for this cage system is Certus, which, according to its press release, means “safe” in Latin.  But Latin students know that “certus” also means “resolved,” “determined,” and “reliable”—all apt descriptions for how the aquaculture industry is seeking to deal with its challenges.