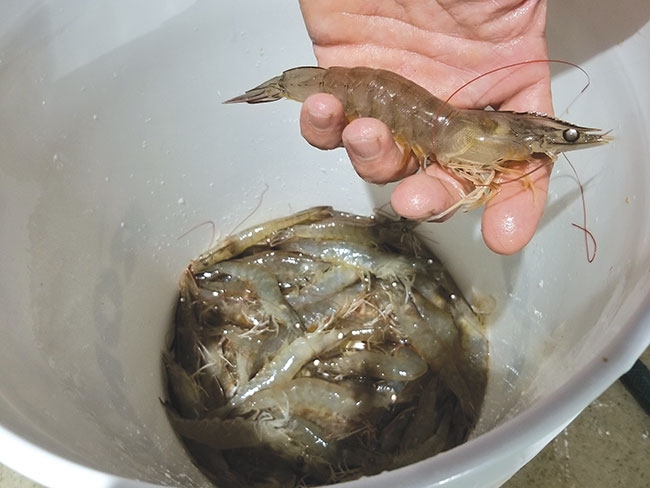 Consumer demand for sustainably farmed food and their negative perception of imported shrimp are behind the developments in shrimp farming in Canada (Credit: Good4UShrimp)

The recent arrival of two new shrimp growing operations in Ontario, Canada, could mark the beginnings of a farmed shrimp industry for the province, if not for the country. Shrimp farming is a major industry worldwide, but in Canada, production on a commercial scale is yet to be seen.

Consumer demand for sustainably farmed food and their negative perception of imported shrimp are behind this development. Early this year, an investigation by state-owned broadcaster CBC has found that Canadian grocery stores are selling imported shrimp containing antibiotic-resistant bacteria.

“We see headlines of imported products as carrying some sort of residue of medication or antibiotic-resistant bacteria and things like that,” says RJ Taylor, marketing director of the Ontario Aquaculture Association. “When we’re talking about the trend towards shrimp, you definitely see that on the consumer side.”

Good4Ushrimp
Kerry LeBreton, president of Good4Ushrimp, one of the two new shrimp farmers, agrees with Taylor’s observation. “Consumers are becoming more aware and more interested in eating better quality food. Know your farmer and know your food. People are more interested and concerned with the supply. We have people come right to the farm. They know exactly what we’re doing here. They know how the shrimp are being raised and they can feel comfortable about it,” he said.

The company runs an 18,000-sq-foot facility near Sudbury using a biofloc system. LeBreton says the farm does not use pesticides, cleaning agents or chemicals and has low environmental impact.

Good4Ushrimp is focused on providing high-quality shrimp for the local community and developing a model that can be replicated elsewhere. “Our intention is to replicate this facility in some of the harshest environments around the world and not just grow shrimp close to the equator or close to oceans, even,” says LeBreton.

The facility will be capable of producing 1,500 lbs of shrimp per week at full capacity but production has been suspended until the construction of a hatchery is complete. The farm has been importing post-larval shrimp from facilities in Texas or Florida but extreme weather conditions in those states can cause supply disruptions and delays. The new hatchery will produce post-larvae for Good4Ushrimp’s own use and for other shrimp farms.

Consumer demand for sustainably farmed food and their negative perception of imported shrimp are behind the developments in shrimp farming in Canada (Credit: Good4UShrimp)

Planet Shrimp
Planet Shrimp Inc is the other new player in the field but it can’t be any more different in farming technique and business philosophy.

Planet Shrimp is pursuing full commercial-scale production for the domestic and export markets. Its 65,000-sq-foot facility in the town of Aylmer is capable of producing 300,000 lbs of shrimp per year. The facility uses a closed-loop recirculating system, which does not use chemicals, pesticides, fungicides, antibiotics or hormones, says company president Marvyn Budd.

“All we do is add salt to the water. The shrimp are raised in this clear, pristine, clean, pure water and, consequently, they come out on the other end with exactly the same taste [as wild shrimp],” he says.

Planet Shrimp uses a proprietary technology that supports the automation of their facility and optimizes production by monitoring and analyzing data collected.

“We are able to be nimble and make informed decisions based on the data,” says Planet Shrimp CEO Sheldon Garfinkle. “That’s a leg up for us. This is very innovative and one has to be nimble to make adjustments when finding the most optimal way of doing things. It also provides end-to-end traceability, which is important for consumers to know that we are tracking the data the moment the post-larvae comes into our facility right until they are put into boxes.”

It took the company a difficult three-and-a-half years to develop its technology because there was no template available, and there were no shrimp farms pursuing a similar approach whose successes and failures could be learned from.

Budd is quick to distance Planet Shrimp from those using biofloc systems. For him, biofloc systems do not meet the definition of recirculating aquaculture systems (RAS) technology.

He explained: “What we describe as RAS technology is the ability to take water and filter it and treat it naturally, and making sure waste is separated from the water. Some would say that the systems that are being used all over North America, the biofloc systems, are RAS technology. I’m not so sure about that. There’s only a half a dozen companies that I can think of in North America that are using RAS the way we’re talking about it, which is water treatment and filtration.”

Planet Shrimp currently ships its harvest to Quebec, but it is looking at supplying the rest of Canada and the international market at some point. However, shipping shrimp around the world is a secondary goal behind the expansion of the proprietary technology, in which they believe so strongly.

“We probably have a responsibility to take this technology and have it used around the world because if we’re producing such an important and pure protein, the world should be able to have that,” says Budd. “We anticipate that our major expansion will be the technology, whether we license it or enter into a joint venture with other groups around the world. We’re a technology company that’s producing shrimp – that’s probably a good way to look at it.”