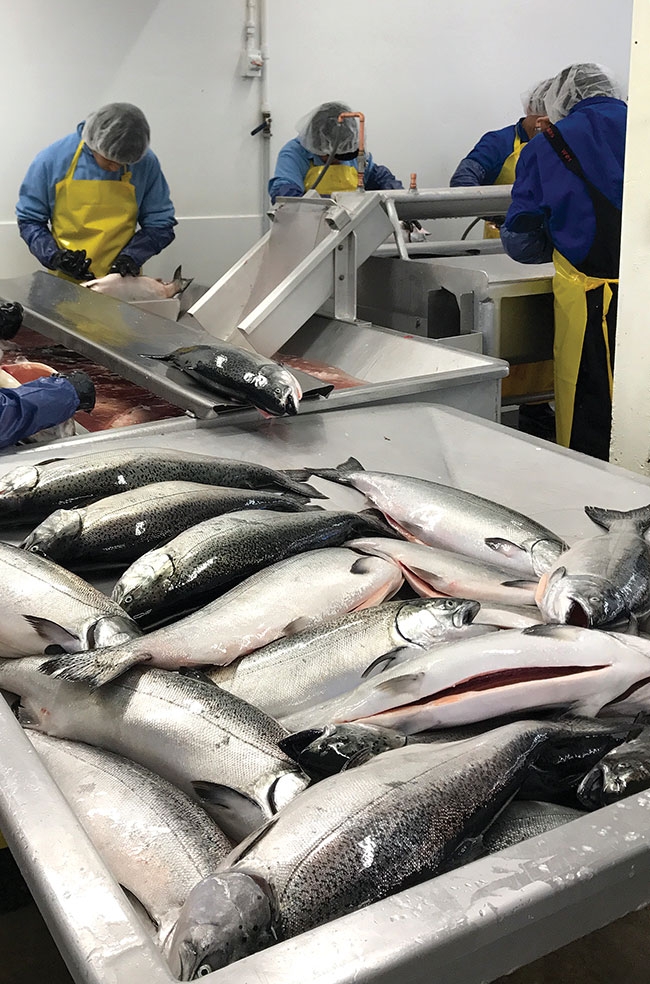 Latest research examining the stomach content of farmed salmon in British Columbia found very little evidence that they have preyed on wild populations.

The study is relevant because of concerns that farmed salmon could eat wild fish, as Atlantic and Chinook salmon naturally prey upon fish in the wild, says Canada’s Department of Fisheries and Oceans (DFO), which conducted the study.

“The intention was to collect new current data looking at all areas in BC at all seasons so we could potentially look at any differences between when the lights are on at Atlantic salmon farms in winter months to prevent sexual maturation and when they’re off in the summer,” says Kerra Shaw, senior biologist – Marine Finfish at DFO, told delegates at Aquaculture Canada 2019.

Between spring 2017 and winter 2019, Shaw and her team assessed 14,100 Atlantic and Chinook salmon from almost 50 farms in BC. The team chose to analyze harvested salmon at processing plants as they would be most likely to have preyed on wild fish, due to their larger size, and the fact that they are taken off feed towards the end of the production cycle, making them hungrier. Assessing already harvested fish also meant not having to kill additional fish for the study.

Of those 14,100 fish, only 11 of them (0.08 percent) showed evidence that they had preyed on wild fish. Ten of the fish that had been eaten were identified as herring and one was likely a sand lance, but that could not be confirmed. And, as these figures reflect full-sized harvested fish, the predation rate for younger, smaller fish would presumably be even smaller.

“I think it definitely indicates that predation is low,” says Shaw. “When you extrapolate that out to all farms, even though the predation rate was low, it still would be some amount of, mostly, Pacific herring that are being eaten. The amount will be very small compared to the commercial fishery. So the impact is going to be pretty low compared to other impacts.”

Shaw noted they discovered more fish in the stomachs from seasons when the lights had been off (seven, compared to four when lights were on), but with such low numbers it is impossible to infer any sort of meaningful analysis on that aspect of the study.

The study results reflect those of similar studies in 2004 and 2006. A final report on the research is expected later this year.