Passionate farmers and technical experts are undaunted by challenges in their quest to buoy Alabama’s fledgling shrimp industry. 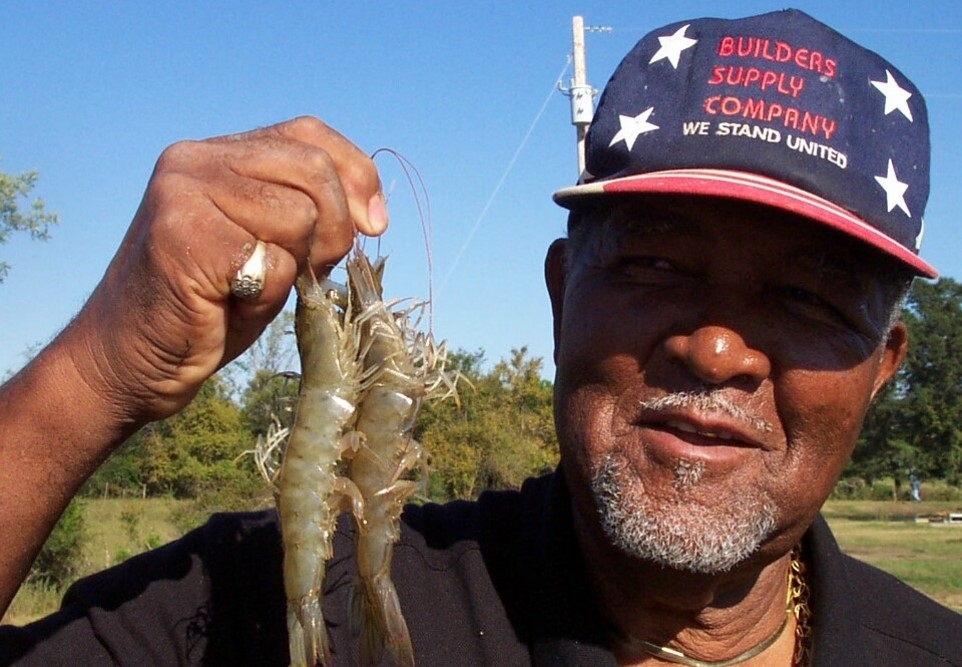 Talk about turning lemons into lemonade. What does one do with abundant underground saltwater that’s too salty for human consumption? Ask Gregory N. Whitis, an aquaculturist at the Alabama Fish Farming Center. In 1998, Whitis and others thought the water could potentially be used to farm saltwater shrimp so they began the journey to build Alabama’s shrimp industry.

With him from the start were Bart Green and David Teichert-Coddington, who both had extensive experience in international shrimp culture. “We have salinities in west Alabama as high as 9.8 so they saw some potential with Pacific white shrimp (Litopenaeus vannamei),” says Whitis.

Around that time, local catfish farmers Rafe Taylor and Richard Odom Jr were exploring alternative species that had a greater profit potential than catfish. They stocked a former catfish pond with post-larvae shrimp.

“They had a one-acre pond and they managed to grow 1,500 lbs of shrimp. They were big shrimp, beautiful shrimp. And they grew at about two grams per week, which is pretty phenomenal growth,” says Whitis.

“David [Teichert-Coddington] gave up his job with the Alabama Cooperative Extension System and partnered up with Dr Rudy Schmittou and built Greene Prairie Aquafarm back in 2000. It took a lot of money to do this but they bought the farm,” says Whitis. It costs roughly $9,000-$10,000 an acre just to get a farm started. “That’s your investment costs, not your operating costs,” he says.

“We started off with a lot of fanfare. A lot of folks were interested in shrimp but the survival issues whittled out a few of them and then we lost a few more,” says Whitis.

Not one to give up easily, the men kept going with their mission. “The potential was there and we recognized that,” he says.

Teichert-Coddington compared his water to diluted seawater and found that Alabama’s inland salty water was deficient in potassium and magnesium.  After adding K-Mag — a fertilizer that contains potassium magnesium and sulfur — and muriate of potash fertilizer, mortality ceased almost overnight.

An Alabama Cooperative Extension System result demonstration also showed similar results for one particular producer — that K-Mag might improve survival. “It wasn’t really statistically clear, but the trend was the K-Mag did a little bit better than the other treatments,” says Whitis.

Another shrimp farmer treated his pond with high volumes of K-Mag last year and the results “blew the records of everybody else in Alabama.” The farmer harvested 4,900 lbs of shrimp per acre at a 1:19 feed conversion ratio. Survival rate at his farm was 62 percent — high compared with the average survival rate of less than 40 percent in Alabama.

“These are phenomenal results because we treated this pond with K-Mag at a very high dose. So we’re hoping we can do that again this year,” says Whitis.

“In this country — Texas, Florida and Alabama where shrimp are raised — everybody has experienced low survival. We do not know if it’s a genetic problem or what, but everybody across the board is experiencing low survival right now,” Whitis says.

While the addition of K-Mag in shrimp ponds has shown positive results in boosting survival rates, it is not a cure-all for Alabama’s fledgling shrimp industry.

“We’re really lacking a critical mass here,” says Whitis. “We need closer seed stock supplies. Our feed comes all the way from Louisiana. Our catfish feed producers are not going to make us the shrimp feed anytime soon. We have one processor in Alabama, in Bayou La Batre, which is about 90 miles away. Even for my farmer in Lowndes County in central Alabama, he had problems getting bulk ice. So, little things like that add up and make things really difficult when you’re trying to get the industry going.”

Another stumbling block is the reality that big buyers of shrimp are price-focused. “Just because you grow them doesn’t mean you’re going to be able to sell them. Most of these big buyers of shrimp are still shopping price. They could care less about these shrimp being locally grown, antibiotic-free, family farm. They’re still shopping price. It’s very hard to move shrimp in large numbers at a really good price. I’ve got one farmer now that’s got 30,000 lbs of shrimp in inventory that he doesn’t know what he’s going to do with.”

Whitis acknowledged that shrimp farming in Alabama is not a profitable business given the current problems farmers are facing.  It boils down to poor survival rates.

“If you have survival rates below 40 percent, the handwriting is on the wall. You’re not going to be able to stay in business long. That’s why we have to get the survival issue figured out. If we don’t improve it in the next couple of years this industry will die.”

Thankfully, what Alabama has is technical expertise, he says. “We’ve got Auburn University nearby and that expertise is incredible.”

Auburn University fisheries and aquaculture professors Allen Davis and Claude Boyd provide technical expertise, and Teichert-Coddington is himself now an expert in shrimp culture. Whitis and the other experts continue to assist producers with water quality issues and treatments to boost survival rates. “We’re not giving up on it,” says Whitis.