It’s unusual for a marine-based fish farmer to be able to drive up to the front door of his operation, but then, the Monterey Abalone Company (MAC) is in an unusual location; it is at the end of a public pier in the main harbor of Monterey, California. 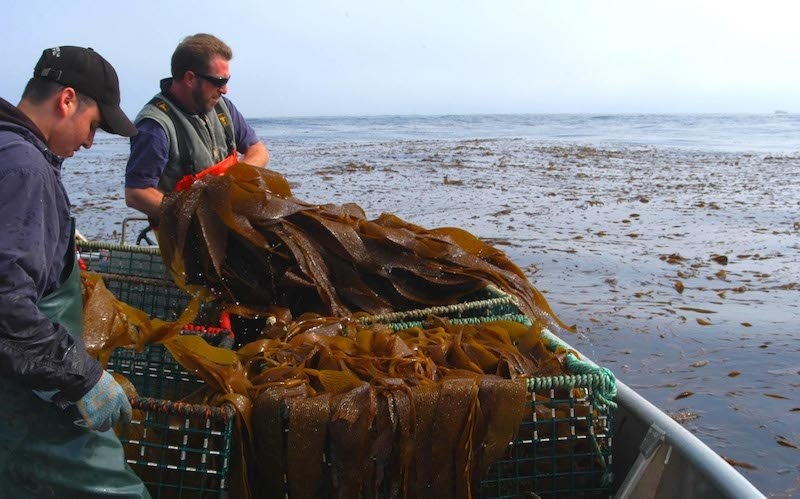 It’s an ideal site, explains business partner Trevor Fay. “Joe Cavanaugh really did his homework when he established the operation,” Fay says. “We are inside the breakwater and that gives us some shelter from surges, but there is plenty of tidal exchange. The grow-out cages are located under the wharf, suspended from walkways that we have constructed among the pilings. We have power right to the site. The wharf gives shade that the abalone like and the kelp beds (for feed) are just outside the breakwater.”

Monterey Abalone has been growing the native red abalone (Haliotis rufescens) since1992. “In California, the commercial fishery for wild abalone was closed in 1997 after decades of fishing pressure, the return of the sea otter, and withering syndrome reduced wild abalone to a level that couldn’t sustain fishing,” says Fay. “There is a breath-hold-only recreational fishery that de facto limits the take.”

Poaching, a red tide in the summer of 2011 that killed tens of thousands of abalone and an explosion in the sea urchin population that has severely impacted the availability of seaweeds, have all reduced the population, Fay explains. The season and bag limit for recreational take of abalone have been reduced in order to protect the remaining wild stock.

MAC purchased seed from other land-based growers until the late 2000’s economic slowdown saw those vertically integrated operations come up short. “We needed to get our own hatchery going and were fortunate to work with Dr Mike Graham, the Moss Landing Marine Laboratory and Peter Hani, and we were up and running within a month,” Fay recalls.

The company spawns once a year, using both wild-gathered, purchased, and company broodstock. Larvae are held at the lab spawning facility and then settled on diatom covered fiberglass panels in shore-based tanks. They are transferred to the grow-out cages once they are big enough – usually between 14 and 20 mm in shell length and about 10 months old – to feed on kelp.

The 250 in-house designed and built 4x2x2 cages consist of plastic panels inside the box for the abalone to crawl on. “Our permit allows us to farm up to 500,000 abalone,” says Fay. “So far, we have not exceeded 400,000, and the majority of those are small in size.”

“Most of the abalone we sell are about one quarter pound live weight, about 3.5 inches in shell length, and four to five years old,” Fay explains. “We do grow some of them up to five to six inches, about one pound in weight, which requires seven or eight years of farming.”

“We feed our ‘abs’ mainly with giant kelp (Macrocystis pyrifera) that we hand-harvest from nearby kelp beds,” says Fay. “When our farm is full of abalone, we use four to five tons of fresh kelp per week.” Winter storms can be problematic. Apart from the difficulty of harvesting in rough seas, heavy weather can cause kelp fronds to break off and get swept away. “Through a collaboration with Moss Landing Marine Laboratory, we developed a method for preserving kelp by salting it and sealing it up in large bins,” Fay adds. “This has been an important resource for us in the winters when fresh kelp may be unavailable.” A small amount of red algae (dulse) supplements the diet and helps the shells retain their red color.

“Once a week, each cage is hauled up by hydraulic winch and the bio fouling is hosed off,” says Fay. “We toss out any predators such as crabs or sea stars and stock it with kelp.”

Their central location has some downsides, Fay notes. “We were subject to intense public scrutiny in the first decade of operation, mostly with respect to our harvesting of kelp,” he explains. “We went through many meetings with the public and various agencies where we defended and explained our practices. The issue was finally somewhat put to rest with the creation of some no-kelp-harvesting MPAs (Marine Protected Areas) and a study that showed our harvesting only accounts for about 0.25 percent of the annual production of our local kelp beds.”

Monterey abalone is definitely a high-end product says Fay. “We sell primarily to local restaurants who value the fresh, farm-to-table concept and we have sales to the public as well.” He chuckles recalling a story of a woman who had purchased frozen Australian product at the local Costco. “Her son pointed out we had an abalone farm right here in the bay and she came down and bought a couple of fresh ones. That’s going to ruin the frozen product for her.”

In the 1990s, there were 13 permitted abalone-farming operations in California, according to Trevor Fay, a partner in Monterey Abalone Company (MAC). “There are now just six farms producing,” he says. Four of them are land-based, there is a small independent barge operator, and us under the wharf.”

Fay admits that MAC has high labour costs, but notes that that is balanced against the high cost of energy to pump seawater for the land-based operations.

“There has been a shift in the global abalone market,” says Fay. “Some of the California farms used to export half of their production to Japan, but that market has been entirely taken over by Korean production. We are seeing imported frozen abalone in stores from Chile, Australia and Korea at very competitive prices.”

“I predict that due to the high cost of pumping seawater, farms will be considering floating cage culture in the future,” Fay says.

MAC partners are happy to welcome a new species that has literally drifted into their operation – purple-hinged rock scallops.

“The rock scallop spat settles on the abalone grow-out cages and we simply collect it,” says Fay. “We have done some growth trials with UC Santa Barbara and they grow by an amazing half-inch a month compared to one-inch a year for the abalone.”

MAC would be able to sell processed product, the abductor muscle, but is working on permitting to sell the whole scallop, which is of interest to chefs. “Right now I get to take some of them home and they have an amazing flavor,” says Fay.