When Mary and Nate Calkins were looking to further diversify their Lake Orchard Farm in Sheboygan, Wisconsin, they chose to invest in aquaponics. 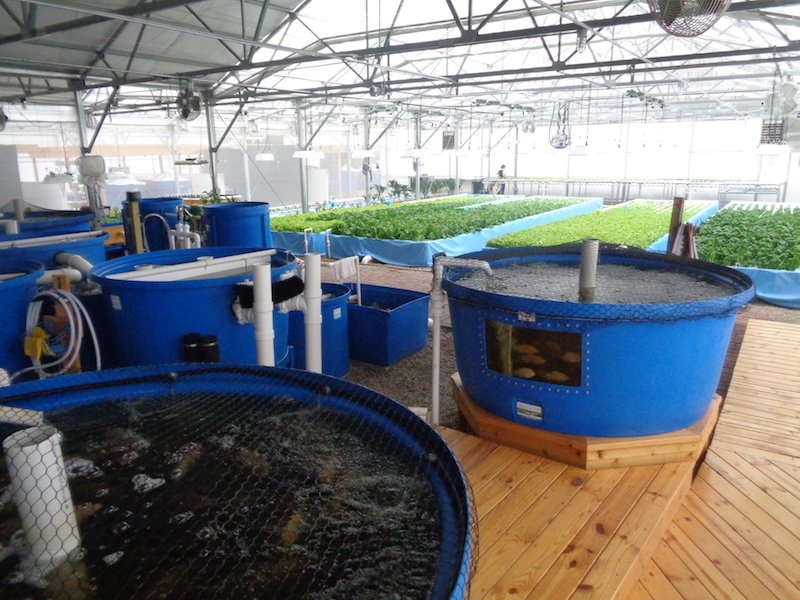 “We have always run a progressive and diversified farm,” Nate Calkins says of their sixth-generation Wisconsin dairy operation, located about 60 miles north of Milwaukee along the shores of Lake Michigan. “I read a quick article about aquaponics and was just riveted by the possibilities.”

Aquaponics ticked a number of boxes for the Calkins. Fish and vegetables made a good business case to balance the more volatile dairy market. He could convert a building housing a milking parlor to house the fish. They would be producing local food, which would contribute to food security and sustainability, and the working environment was very positive. “There is something about walking into an 80°F greenhouse in February (when Wisconsin temperatures are well below freezing) and seeing all the lush plants,” says Calkins. “Our employees sure like it.”

Calkins is a structural engineer by training and was able to construct the 4,000-sq-foot greenhouse by himself. “It came on a truck and I was able to follow the instructions,” he quips. But the couple went with a custom fish and plant rearing system from Nelson and Pade Inc in Wisconsin.

“I wanted a ‘Cadillac’ system,” says Calkins. “I know someone who has a make-shift aquaponics system in their garage that they have cobbled together with tubs and I bet they actually grow more vegetables outside during the summer.”

The on-farm well taps into a limestone aquifer with a pH of around 7.8. “When we put the fish in, they bring the water down to around 7.1, which is ideal for growing tilapia,” Calkins explains.

Tilapia was the species of choice. “We were looking at the quality of fish to grow the greens,” Calkins explains. “Perch is a popular native species here in Wisconsin that we could grow for the local market, but they are a slower growing fish that don’t provide the same level of nutrients to support the greens.”

“We actually harvest based on nutrient load that will be available for the plants. Some weeks I may harvest as few as four fish, or none at all,” says Calkins. He looks for the nitrate level to be between 150 and 160 ppm. “Right now it’s at 120 ppm, so I will need to build it back up.”

“Our biggest expense is fish feed, but it’s still cheaper than plant fertilizer,” he adds.

The 5/8-inch fingerlings are four weeks old when they arrive from Americulture, a supplier of Nile tilapia fry and fingerlings based in New Mexico. They take 12 to 16 months to reach market weight. “We are really happy with the quality of the fry that we get from Americulture, we only lose about one-half a percent,” says Calkins. An average weekly harvest is 50 to 60 fish weighing around 2 to 2.5 lbs.

Rangen is the feed of choice. Calkins is happy with the insect and fishmeal protein base. “I have used other feed in the past but I don’t like corn-based products,” Calkins comments. “I’ve never seen a fish jump out of the water and take a bite of corn.”

“With our weekly catch of 60 fish and the tilapia dress-out of 1/3 meat ratio, that’s only 30 to 40 lbs of meat,” Calkins points out. “We sell most of it to retail stores, or through our on-farm shop. We might hold back a few fish until the following week if one of our restaurants wants to run a special.”

The aquaponics greens and tilapia were not an easy sell when Lake Orchard started production three years ago. “We opened our doors and had people in for tours to show them our operation. Even though aquaponics is an ancient system, people didn’t know about it and were scared of it,” Calkins says. “We talked about how our farm environment is different from Asia. Tilapia can have a bad reputation in America, but it’s not the fish’s fault, it’s how they were raised.”

The greenhouse can produce 60,000 heads of lettuce greens a year. The majority is sold in bulk with some retail packs. Calkins estimates about 60 percent of the production goes to wholesale and 40 percent goes to retail. Seedlings are transferred to 1 1/4-inch spacing in the floating polystyrene rafts that measure 8’ x 80’. At 12 weeks they are moved to 4-inch spacing, and after another 12 weeks to 8-inch spacing. “Moving them twice is a bit more labor-intensive, but it allows us to use the space much more efficiently than if we had them in 8-inch space all the time,” he says.

The media beds hold recycled glass that nurtures rooted plants like tomatoes, beans and kohlrabi. Calkins says he can get 500 to 600 lbs of tomatoes in addition to the lettuce.

The entire production is heated with propane from December though to March. “When it’s sunny the heaters don’t run, when it’s cloudy they run constantly,” he says. At night, heat from the metal halide lights helps moderate the air temperature.

He estimates that on average, propane costs $1,000 per month. “It’s very expensive,” says Calkins, so he is investigating using solar power. “I’m hoping to take the operations completely off-the-grid by next summer,” he says.