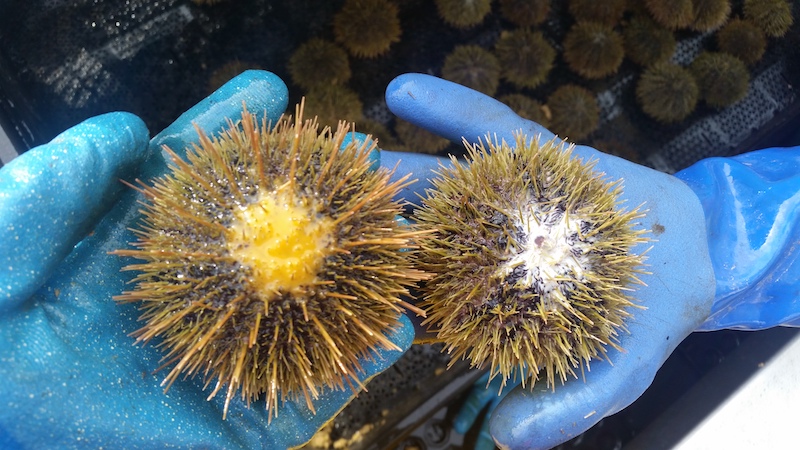 Female and male green urchins spawning. 'We are taking a natural resource that has very little economic value Taking sea urchins from the wild and fattening them in captivity opens up potentially new opportunities in aquaculture

Taking an animal near the bottom of the benthic food chain and elevating its status to a premium sushi product, while helping to restore damaged aquatic ecosystems sounds like a win-win for Urchinomics president Brian Tsuyoshi Takeda.

“We are taking a natural resource that has very little economic value, a sea urchin with little or no marketable roe, and we are turning it into one of the most attractive seafood products on the planet,” says Takeda from his company base in Norway.

Urchinomics is currently partnering to test ranching techniques to fatten the roe of wild-caught sea urchins, using a specially formulated feed and a proprietary tray system, at several Canadian locations.

It all began in Japan, after the 2011 tsunami. The tsunami washed away predator species such as crabs and starfish and within two years the urchin population increased about seven-fold, Takeda explains. “They ate the entire kelp bed that is the foundation of the coastal fishery,” he says. “No cover for fish to spawn and hide means no fish, and the ecosystem collapses. One of the most important fishery regions in Japan went from super productive to dead.”

Observers note that these so-called “urchin barrens” are occurring more frequently not only in post-tsunami Japan but also across the globe when the predator/prey balance is out of whack. “It seems to be a combination of overfishing, pollution and climate change,” notes Takeda.

If unchecked, urchins will over graze an area, destroying the kelp and eating themselves out of house and home, but the hardy creatures don’t die says Takeda. They keep their size, but remain in a dormant state.   If something shows up they eat it, which will prevent the kelp from coming back and then they return to being dormant.  But the roe that is the edible part of the urchin shrinks away.  “Fishermen don’t want them and even the predators don’t eat them,” says Takeda.  “They seem to know that they are empty.”

“We have this catch-and-feed technology that we developed in Norway and we wondered if it might work in the Japanese situation,” Takeda says. “The plan was to catch, feed and fatten up the roe in these urchins and after 10-12 weeks sell them as a premium seafood product.”

“We wanted to create an economic incentive for fishers to remove these deadbeat zombie urchins,” says Takeda “The trials in Japan were fantastic, almost too good, we thought we should probably do this again. And that was when the Mitsubishi Corporation came on board and partnered with us.”

Urchinomics is currently working with Fisheries and Oceans Canada (DFO) at the Pacific Biological Station in Nanaimo, the DFO in Saint Andrews New Brunswick, the Memorial University in Newfoundland, and Merinov in Quebec. “We have signed partnership agreements that include information sharing,” Takeda points out. “Cooperation and cross pollination of information is very important to the company.”

Over the last 20 years, Nofima — the Norwegian Institute of Food, Fisheries and Aquaculture — has developed a unique feed that holds its form in the water for between 7-14 days without dissolving, explains Takeda.    “Urchins, unlike fish, take a long time to eat so the feed has to keep its form and not dissolve,” he says.  “The feed does contain some fish meal, sourced from sustainable off cuts.”  Although urchins eat mostly kelp, they are not herbivores, Takeda points out.

“Anyone who has oyster farming infrastructure has 98 percent of what they need to be able to do urchin farming with our specifically designed cages,” says Takeda. “We are trying to deliver all the pieces that you need to be able to do this farming. We take responsibility for the entire value chain from start to finish at our operating sites.”

“We bring not only the production technology, but also the seafood distributors from Japan and China that are ready to sign long-term contracts for production because they want to secure supply,” Takeda adds.

“A sea-based solution will probably be the most cost-effective, but we are also developing land-based systems for colder climates or less optimum sites,” says Takeda. “The prototype we hope to launch in a few months will be designed for both for flow-through and recirculation.”

Takeda says the pilots they are running suggest that the economics make a lot of sense. “If we factor in the ecological impact we provide and the social benefit we provide through jobs, the total bottom line looks very promising,” he says.

“There is not an aquaculture that I know of that adds that amount of value in just 10-12 weeks,” says Takeda. “We are taking an overly abundant resource that is hindering the growth of other stocks and turning it into something that tastes good and sells.”

Dr Chris Pearce, research scientist at the DFO Pacific Biological Station in Nanaimo, on Vancouver Island, British Columbia, says the practice of enhancing urchin gonad yield shows promise but a lot of work needs to be done to determine its economic viability on a commercial scale.

Pearce has had a lot of experience working on gonad enhancement in urchins using commercial diets. He even developed a feed on his own.

“I was first approached by John Lindsay, a BC urchin fisherman and member of the Pacific Urchin Harvesters Association. He came to me to talk about taking low-roe-yield adults from the wild and impounding and feeding them,” says Pearce.  “I knew the Norwegians have been using special trays and feeds for gonad enhancement and I eventually connected with Brian Takeda at Urchinomics.”

Pearce has just completed a 12-week gonad enhancement trial in partnership with Lindsay and Urchinomics. The company supplied the trays and the feed in-kind for the project.

“We used both green and red urchins Strongylocentrotus droebachiensis and Strongylocentrotus franciscanus that Lindsay collected from the wild,” says Pearce. They were housed in the trays supplied by Urchinomics and fed either a Nofima diet or a control diet of bull kelp. “The results of the trial showed that the prepared diet increased gonad yield much more than the kelp after the animals spawned part way through the trial.”

Pearce says in previous work with prepared diets, he started with animals as low as 3- to 5-percent roe yield and within 12 weeks has been able to get that up to 20- to 25-percent yield.

“Research on this practice of enhancing gonads has been around for decades, but there has not been much work on a commercial scale,” Pearce points out.

“We can certainly bulk them up with these prepared diets.  Some of the latest formulations are showing we can get the right color and flavor although there is still some work to be done there,” says Pearce.  “The containment systems work well, but can you make money at this?”

The Norwegian trays have been developed specifically for urchin gonad enhancement and are more expensive than say, an oyster tray.  There is a mesh bottom that supports the animals, with a mesh size small enough to hold the pelleted fed, but large enough for the feces to drop through.  The feces and unused food collect on the solid lid of the tray below.

“There are labour costs involved with lifting up the stacks of five or 10 trays to the surface, cleaning and disposing of the waste material appropriately and then feeding every tray, restacking them and placing them back in the water,” Pearce points out. “There is a lot to be worked out.”

“We are considering research to put in a commercial site and look at this on a much grander scale,” says Pearce.   “I think it can work biologically. We really need to prove it on an economic basis by considering tray cost, feed costs, labor, boat costs and market value.  And we want to look at the environmental impacts as well.”