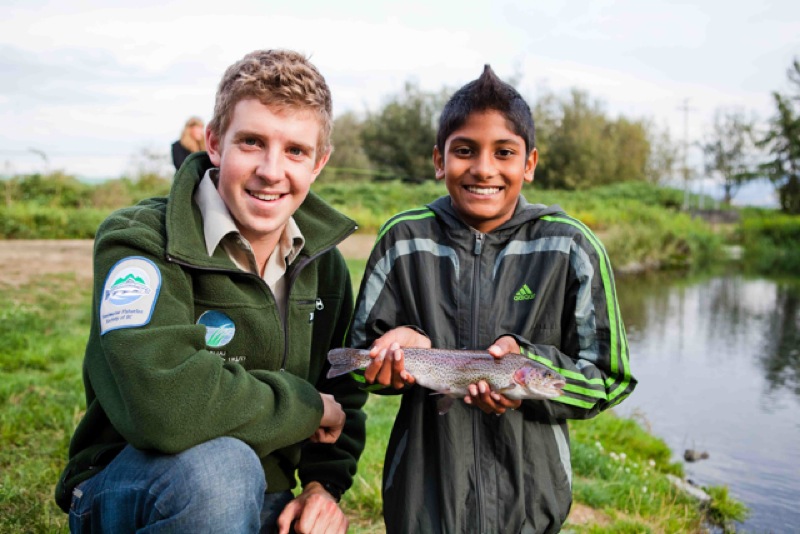 The final product - a happy customer with lunch in hand. Lakes are stocked with ‘Catchable’ Rainbow Trout (225-250g) to create an ‘instant’ fishery. However

While many commercial aquaculture operations practice photomanipulation of broodstock to move spawning dates and long-day lighting to improve growth characteristics in smolts, the practice is not widespread in the recreational fisheries. However, it can be an effective strategy to help manage restocking operations using out-of-season egg supply and long-day photoperiod as a cost-effective method for producing early catchable fish.

Vancouver Island Trout Hatchery is the home of the fall-spawning FVRB brood and all domestic eggs are supplied from this hatchery.

Four-year-old spawned kelts were recuperated and put on 24h light from October to March when the photo regimen was changed to a fall photoperiod of 8L:16D until April. The fish were induced to spawn using implants in May. Eggs were viable and had ~88% survival to eyed.

Normally, these eggs would be eyed at the Vancouver Island Trout Hatchery, transferred to another FFSBC hatchery for growing to fry and finally transferred to the Summerland Trout Hatchery for final ongrowing. This is mainly due to space crunch for egg and fry development that happens after the collection of wild-sourced eggs; available rearing space may necessitate several internal fish transfers. However, the availability of spring domestic FVRB eyed eggs eliminated the need to transfer eggs from VITH to an intermediary hatchery and instead, eyed eggs went directly to Summerland Trout Hatchery.

As well, the time of stocking FVRB catchables varies with the season and the Society hatchery location. Some of the fish find their way as far north as Prince George in central BC in early summer. This means a continuous supply of product from ice-off to ice-on, but the supply of eggs is normally in the late fall.

Eyed eggs at the Summerland Trout Hatchery were hatched out and first fed under long-day lighting conditions of 20L:4D and had 91% survival from eyed to ponding. Instead of first feeding in troughs, fish were ponded into full depth circulars with a current velocity of ~1.3-1.5 body lengths /second and approximately 3.5 lpm/kg. Mortality removal, cleaning and culling was to standard practice.

Water delivery was by a vertical spray bar to keep fish in the water column. Photoperiod treatment continued through summer.

Fish at Vancouver Island Trout Hatchery and Summerland Trout Hatchery were weighed and measured at regular intervals. These data and feed use, mortality and environmental information were entered into a commercial software database to calculate and track performance indicators such as specific growth rate (SGR), temperature-balanced growth rate (GF3), food conversion rate (FCR) and mortality rate (MR). These data were analyzed for the two groups of fish.

Normal experimental design entails replicate treatments done under standard conditions where the only difference between treatments is the variable under examination. In this study, the Managers at Summerland Trout Hatchery and the Vancouver Island Trout Hatchery took advantage of available eggs from spring-spawned FVRB brood to look into the possibility of rearing spring catchables from these eggs; there are no replicate treatments and no standardization of conditions. However, the work gives us valuable insight into the production of yearling spring catchables under normal rearing and photoperiod enhanced conditions. This is not a comparison of methods or hatcheries.

The fish held at Vancouver Island Trout Hatchery were raised under normal practices and conditions, with the exception that the fish were grown six months out of phase. Although early mortality rates were higher than normal, the fish grew well with good FCR and SGR. By 10 weeks the fish had reached the 3 gram mark – an indicator of minimum stocking size for fall fry.

The remarkable aspect of rearing these fish was that Vancouver Island Trout Hatchery normally holds back growth on fall-spawned fish, whereas here, growth was not curtailed and fish were allowed to grow at a steady pace. Vancouver Island Trout Hatchery staff feel this was a more natural approach to the rearing cycle. There were discernible savings on space and water flows as well as an easier time of container management with the offset growing cycle.

Fish at the Summerland Trout Hatchery were ponded and first fed in deep containers with good flow and showed a high level of success in taking first feed. Growth under 20 hours of light a day seemed to increase feeding and conversion as reflected in growth rate. Mortality was low and growth continued well into the autumn. The fish attained a 4.5g average weight 10 weeks post ponding and this growth carried on until water temperatures dropped.

Both the Vancouver Island Trout Hatchery and Summerland Trout Hatchery succeeded in producing spring catchables on size and on time from the eggs received from spring-spawning FVRB. The supply of eggs from this spawning obviated the need to ship eggs to FVTH and transfer sub-yearlings from other hatcheries. STH staff were able to raise their own spring catchables which results in significant costs savings.