Fisheries and Oceans Canada (DFO) has finalized its Integrated Geoduck Management Framework, which provides guidance on developing new geoduck aquaculture sites along the BC coastline. Though it has taken over 10 years to develop, industry groups feel that it will help advance BC’s geoduck aquaculture industry. 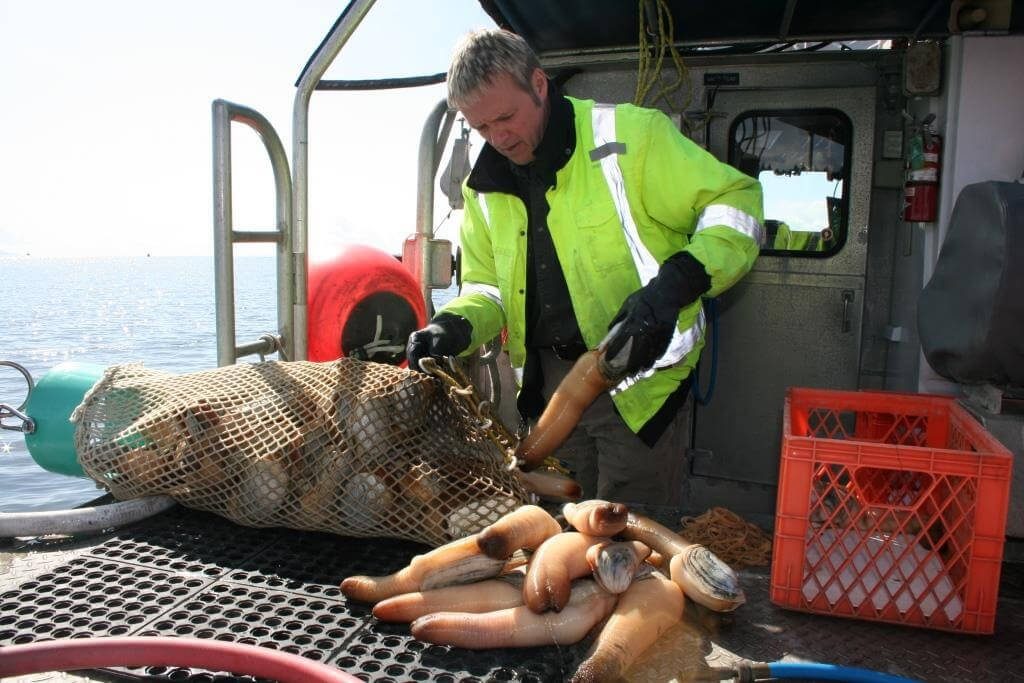 “It is a promising start,” says Darlene Winterburn, executive director of the BC Shellfish Growers Association. “The framework is a means to grow aquaculture and there is opportunity within the guidelines.”

DFO describes wild geoduck harvesting as a “prosperous and environmentally sustainable fishery.” The Underwater Harvesters Association (UHA) says it sees roughly $8-$12 (C$10-$15) per pound at the boat. Quotas are restricted to less than 2 percent of the observed geoduck biomass on a bed-by-bed basis. The clams are harvested by directing a high-powered water nozzle, called “stinger,” into the substrate to uncover the geoduck and harvest it alive.

A boost for aquaculture

BC growers, and particularly First Nations groups, are interested in expanding aquaculture opportunities.

“It’s positive we can now expand outside of the Strait of Georgia,” says Richard Harry, executive director of the Aboriginal Aquaculture Association (AAA). “The waters between Vancouver Island and the mainland of British Columbia were previously the only areas where geoduck aquaculture tenures were granted.”

“Geoduck aquaculture really fits with traditional First Nations values,” adds Harry. “It’s just a big clam. We have been tending clam gardens on our traditional territories for thousands of years.”

The challenge of managing geoduck fishery and aquaculture together is how to develop new culture sites, while maintaining access to current wild harvest beds.

Red areas will remain wild harvest sites and will not be open to aquaculture, except for small 10-hectare applications by First Nations grower companies. The First Nations can only apply for red-zone tenure on a site directly adjacent to reserve lands. They must actively farm the tenure and the license will be non-transferrable.

“There are opportunities here to move forward,” says Harry. “We are not happy with the 10-hectare size, but that’s what we are dealing with now. We will be discussing this further with DFO.”

Applications for new tenures will be accepted in yellow zones with a pre-harvest allocated to the wild fishery. Prior to the licensee occupying the site, the UHA may harvest 20 percent of the assessed wild biomass. A similar pre-harvest condition applies to the new First Nations tenures within red zones. Remaining stock is owned by the licensee and is considered by-catch to the aquaculture operation. The rest of the province is considered “green” and applications are unrestricted.

Daniel Rabu, a business and technical expert with the AAA, encourages growers to look for new sites. “I don’t think folks should just be looking at those red and yellow zones,” says Rabu. “They should be looking for ground that is suitable based on mapping, local knowledge and historical harvest. They should be putting divers in the water and checking the substrate, its depth, how it is for digging and how they can place predator protection.”

And while DFO currently has a seven-year wait time from seed until harvest, growers hope to access stock earlier to provide working capital for their business and “cocktail ducks,” a smaller product, which has received good market feedback. “We’re seeing a 25-percent higher value for farmed product due to its uniform consistency, size and color,” says Rabu.