Terry Brooks, president of Golden Eagle Aquaculture of Agassiz, British Columbia, says he has the formula to fine-tune coho farming in land-based closed containment systems. “We can do this all day long and provided we don’t outstrip the demand we will be fine,” says Brooks, who got directly involved in the company two years after Golden Eagle acquired the operations from Swift Aquaculture in 2014. 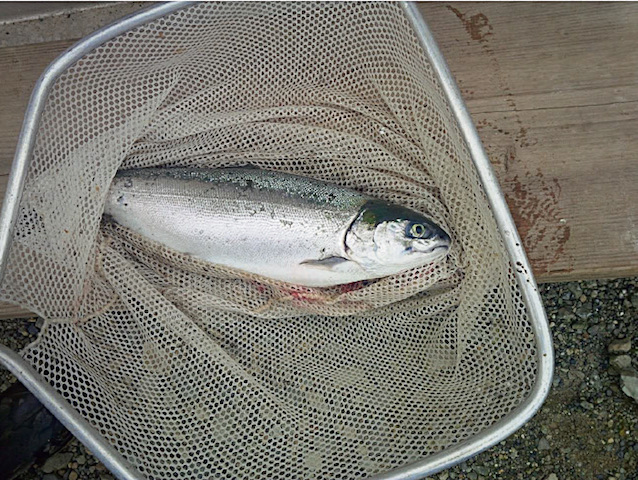 Salmon production at Golden Eagle Aquaculture falls in the range $3.75- $4.50 (C$5-6) per lb at wholesale 'Being realistic about fish production numbers' is key to marketing success

Brooks knows whereof he speaks. Under his management, Golden Eagle’s sister company — Golden Eagle Sablefish on Salt Spring Island, BC — thrived. Today, marketing and fish production at both companies are stable, the key, he said, is “being realistic about fish production numbers.”

The use of land-based tanks in salmon farming is technology that some, particularly environmentalists, favor over net pens in open water.

“Everybody has their own take on net pens,” Brooks says. “Some people want RAS to replace net pens.  Some people think it’s the be all and end all and others think it can’t be done,” says Brooks. “I think where we are is we are beyond the research part of it.  We think we understand what the reasonable market expectations are.  We know what we need to do to make this work.”

“But our particular theory for our recirculation system is that it is a niche market and providing you don’t over produce, it can be a very nice market of supplying high-quality fresh fish at a reasonable price.  We know fresh is best.”

“There is always going to be a market for good quality fresh salmon,” Brooks says. “That is our goal here at this facility — to produce a good quality salmon and produce it for 12 months.”

Brooks believes one of the advantages of the farm’s location is the water quality.  “The farm is on the north shore of the Fraser River, up against the Coast Mountains.  A shallow well produces ample 8-14C water.  The alkalinity is good, and we don’t have to filter it, but as with any RAS system we do add oxygen.”

“We are running our RAS system at about 80- to 90-percent recirculation,” Brooks says.  “An Aquacare micro-bead biofilter system filters the water and a couple of local dairy farmers take the wet solids to fertilize their fields.”

“We are sourcing 5-gram fry from Target Marine,” says Brooks.  “This is coho stock that they have been breeding for 20 years”.

Golden Eagle has two or three intakes a year.  The fry are quarantined in a separate heated building, before being transferred to six 280m3 growout tanks, which are outside under unheated fabric domes. Total production is currently 120 tonnes a year.

The company uses a combination of Ewos and Taplow (local BC company) feeds.  “We are using a very standard formula based on years of Pacific salmon research, so it’s pretty much a done deal,” says Brooks.  “We do things a little bit differently because it’s a recirculation system.”  He says that they work closely with Taplow, in particular, to continually develop their feed.  “We use small low-tech automatic feeders.”

“Feed conversion ratios are pretty solid at 1.25 to 1.3,” Brooks says.  “We have a customized conditioning method 10 days prior to harvest.  The coho pigment up very well.”

Brooks says the fish are graded once at around 50 grams.  It takes 16 months to reach a target harvest weight of 5 lbs.  Fish are harvested every 10 days and then it’s off to a custom processor in Vancouver.  The fish are distributed as both whole and fillets by Willowfield Enterprises, a Surrey, BC specialty food distributor that carries Ocean Wise-certified fish.

“We are doing retail right now,” says Brooks. “The fish are distributed, always fresh, between BC and Alberta. We don’t ship to the US.  We are trying to source customers for this project as close to the farm as possible.”

“We have worked from the market backwards for two years now,” Brooks explains.  “We have lots of customer feedback.  We know the product is doable, so now the job is to find out what is going to be the overall tonnage we can put into an area without having send the fish too far away.”

“We are looking at expanding, but again, not to exceed the market capability [to absorb our production],” says Brooks.   “I think $5-6 is sustainable.  I could tell you that I’d love to get $8-9 a pound.  There are certain markets that will let us do that, but they are so small that it wouldn’t be prudent to budget on that.”