Reprieve for net-pen farming in BC

As farmers, federal government work out a transition plan 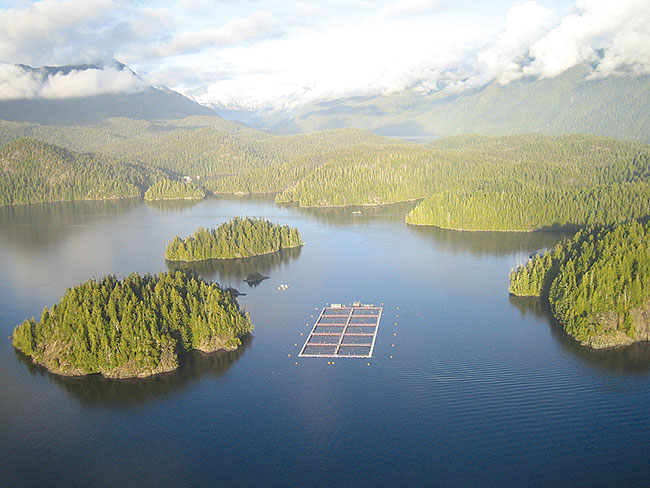 BC salmon farmers and the federal government to discuss approach to growing industry sustainably Photo: BCSFA

A continuing issue for British Columbia’s salmon farmers is the federal government’s pledge to phase out open net-pen salmon farming by 2025.

However, following discussions with stakeholders and additional research, a transition plan will be put in place, but net-pen farms won’t end.

John Paul Fraser, executive director of the British Columbia Salmon Farmers Association, says there has been on-going dialogue with the Minister of Fisheries and Oceans Bernadette Jordan.

“You can’t chart a future without understanding the current practices, and that’s what has been valuable about this process,” says Fraser. “The minister has been clear about the need to have a respectful, thoughtful process. I would say the conversation has just begun, and there’s a greater degree of understanding of what closed containment, and other production technologies offer both on the plus and the downside.”

The end result may not be closed containment but rather an approach that improves environmental performance.

“I think there is greater awareness that big companies already adhere to rigorous environmental standards and third-party non-government standards that are voluntary but extremely rigorous, like ASC,” says Fraser.

David Kiemele, managing director of Cermaq Canada, says the consultation is expected to start in the fall and the winter. “Coming up with a responsible plan by 2025 to transition from open net-pen farming can mean a lot of different things. We’re focused on finding a pathway forward to sustainably and responsibly grow salmon in the ocean on British Columbia’s coast.”

“I’m not against land-based farming, but if there is a huge push to moving fish onto land, it simply won’t happen on Vancouver Island. There is a reason why some of the other land-based projects aren’t happening on the same coastlines where fish are grown in the ocean — it’s a costly exercise. There are environmental impacts from land-based farming just like any farming activity,” he says.

Meanwhile, the government will be issuing additional recommendations on alternative aquaculture technology based on technical work done by Nova Scotia-based Gardner Pinfold Consultants Inc, and as part of a multi-stakeholder process.

The study also identified measures to support technology development and adoption in BC.

Critical to the industry is the recognition that hybrid technology is a potentially viable and important new path for BC where the salmon are raised for less time in the ocean and more time on land.

“I think there will be a good conversation about what kind of cleantech or other incentives and risk-mitigation measures the government might consider to support innovation. We’ve had a very open and positive discussion around what might be needed,” Fraser says.