Some progress have been achieved in addressing marine debris from shellfish aquaculture activities in British Columbia, Canada but more needs to be done if the sector is to regain community support, said Chris Marrie, senior shellfish biologist with Fisheries and Oceans Canada (DFO). 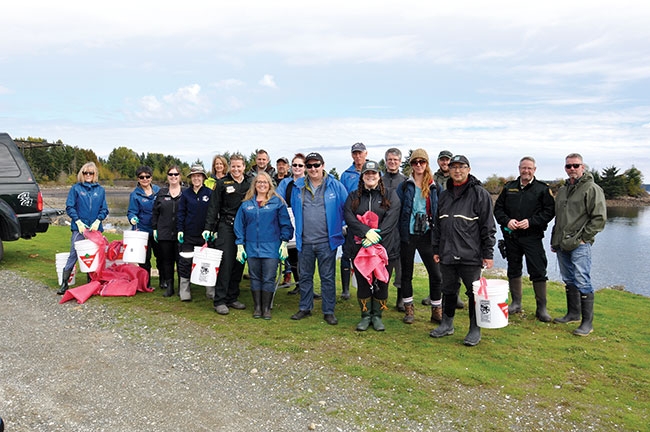 Shellfish growing operations have historically enjoyed support in the province but areas that have problems with marine debris washing up “are starting to really push back,” Marrie told delegates at Aquaculture Canada 2019 in Victoria, BC.

“We’re seeing 500 to a thousand letters voicing concerns about plastic when it comes to this industry. Out of the three sectors that DFO manages for aquaculture (freshwater, finfish, and shellfish) shellfish aquaculture vastly outweighs the other sectors in terms of the amount of debris that’s generated,” he said.

He acknowledged that the sector has been and continues to be very dependent on plastic and Styrofoam but he says better management by shellfish growers should enable them to get a handle on debris—baskets, rope, predator netting, and buoys—that break free from their sites.

Styrofoam comprises 28 percent of the visible ocean debris per a United Nations study, and it is one of the biggest components of marine debris from the shellfish aquaculture sector, he said. “There’s a lot of oyster culture in BC as I’m sure there is on the East Coast as well, and Styrofoam historically has been the preferred flotation method but containment has just been poor, at best.”

“Unfortunately, from my point of view, it’s pretty cheap to replace these materials so it’s just ineffective lifecycle management,” he continued. “If not maintained on a fairly regular basis, like weekly, we have big storms, big currents and winds that break apart the nets, which then roll up and down the beach and trap crabs, herring and anchovies so they can become a bit of a quasi fishing gear.”

DFO manages the problem by making the issue a condition of license. “We have a condition that says: you shall secure it and prevent it from being thrown into the ocean and becoming garbage. We do find violations and we call them on it.” Offenders are given a timeframe to rectify the violation.

In 2018, DFO put 33 shellfish farming sites as “high priority” for inspection. “All 33 had one or more violations, but the good news is that 31 out of the 33 today or to date have cleaned up or rectified their violations,” Marrie said.  For the two offenders, a dedicated aquaculture enforcement team follows up.

Going forward, DFO will enhance enforcement efforts in the shellfish sector by redeploying compliance officers from the finfish industry to the shellfish industry.  “At the beginning of our program when DFO took over the management and regulation of aquaculture in BC in 2010, we focused all of our enforcement efforts on the finfish industry. Compliance was found to be very high in that industry for just a variety of reasons. They’re well organized. They typically have more resources, third-party certifications and all these other things that drive innovation and compliance above and beyond our regulations. We’ve now redeployed these officers to the shellfish industry,” he said.