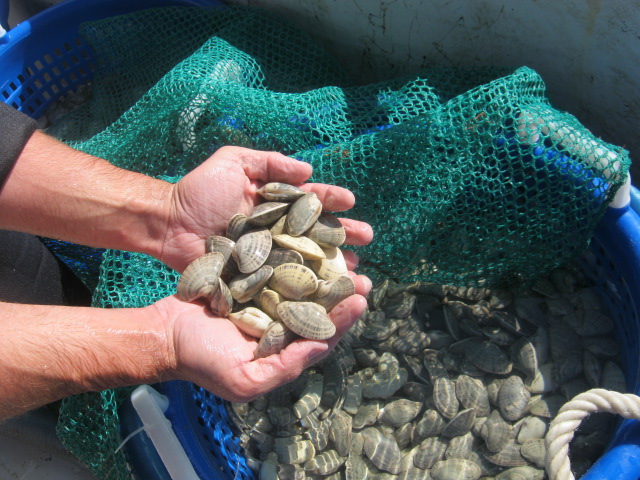 “Several years ago we took the Sunray Venus clam to the Boston Seafood Show and the response was overwhelming,” says Tom McCrudden, President of Research Aquaculture Inc. “Customers from across the country were ordering but supply is still an issue.  The demand is there but we can’t keep up with production.”

Located on the east coast of Florida, north of West Palm, McCrudden and his staff have 20 years growing experience with clams, mostly Mercenaria, and about 8 years ago started looking at the potential for aquaculture for the local Sunray Venus clam, Macrocallista nimbosa.

The Sunray Venus clam has a winged shell with a unique star design.  The grey shell turns coral pink when cooked making it especially attractive to chefs.  “It also has a higher meat count that other clams, more like a mussel, which makes them in demand by restaurants.”  McCrudden says.

The Venus clam is native to southwest Florida but is not as robust has the hard shelled clams.  “It has specific growing requirements”, McCrudden explains “Venus clams like higher salinity.  They survive in 20-30ppt but grow best in salinities higher than 25ppt.  And they need warm water 24-32oC (75-90oF). They stop growing at lower salinity and lower temperatures”.

Venus clams also prefer sandy areas which limits their natural range and restricts the areas appropriate for aquaculture growout leases.  Because they have thinner shells, the clams require delicate handling and special grading equipment.  Additional work and specialized equipment is also needed to purge the clams after harvesting for 48 hours and remove sand and grit before marketing. But payoff is the market value – “almost double that of hard shelled clams with Venus clams worth $35/100 compared to $20/100 for other clams.”

RAI is leading the development of this new aquaculture species and is the first company to have a fully integrated production system for the Venus clam – from spawning to wholesale.

The RAI on-land hatchery production system has been successful and RAI can supply seed year round for their own growout leases and for other growers.  They have developed their own strain of broodstock with an especially beautiful star burst design and appearances are very important as McCrudden points out “The clams are beautiful – heart shaped and shiny, restaurant customers ask to take the shells home with them.”

Approximately two months post spawning, the 5-6mm seed are out-planted in mesh bags to a nursery area at 6-8 thousand clams/bag and a couple of months later the clams are moved to a 10-12mm mesh bag at 600/bag and placed in a growout areas at 1-10’ depth.  They grow quickly and if first planted in April, they can be harvested by hand or by divers in the fall of the same year at the preferred market size of 2.5 inches in length tip to tip.

But after developing the hatchery and growout techniques several years ago, production has been shut down due to red tide in growout areas.  During the shutdown McCrudden has been busy searching for new growout sites with the best combination of temperature, salinity and sandy bottom for good growth and survival and working with regulatory authorities to refine the red tide shut down requirements should the growout sites be hit again in the future.

The company is regrouping and will be in good shape to provide a consistent supply within 12 months.  The goal is to produce 5 million clams in year 1 of production and to be able to supply consistently throughout the year.   “Everything is coming together, regulatory delays are our final hurdles and we are working through them” McCrudden explains.

RAI is also working to not repeat the past shut down by identifying new growout areas.  “Diversification of growout areas is the key to consistent supply,” says McCrudden “if one area gets hit with red tide we can still harvest in the other areas. We have been working with the state to locate a number of areas for leases that have the right characteristics for production but also have less likelihood of red tide.”

Though the Sunray Venus clam grows in other areas of the southern US, “Florida is the ideal location for the new industry” says McCrudden, “Other areas are looking at it but the State of Georgia has generally more muddy bottom; there is a sea grant project further north on the east coast but the water is colder so the growing season would be longer; Mississippi, Texas and Louisiana have lower salinity water.  Even Florida only has specific areas that are best for developing culture.”

“We have a unique opportunity in Florida to diversify and build the shellfish industry without affecting the current hard shell clam industry” says McCrudden.  But in order for the industry to develop and grow, “resources such as Sea Grant and University of Florida need to collaborate with successful growers and focus their efforts in areas that are ideal for the sunray Venus clam”.

“We know the clam requirements for water temperature, sandy bottom and salinity to be commercially successful.  To move ahead we need to collaborate and have the funding and research focus on ideal locations.”

McCrudden is looking to the future and explains that “Within a year we will be able to provide a consistent supply from the leases and have processing re-established.”

“The least of our worries is getting rid of the product, customers throughout the US are asking for it – restaurants want a consistent supply. If they put it on their menu they are counting on us to provide it every week.”